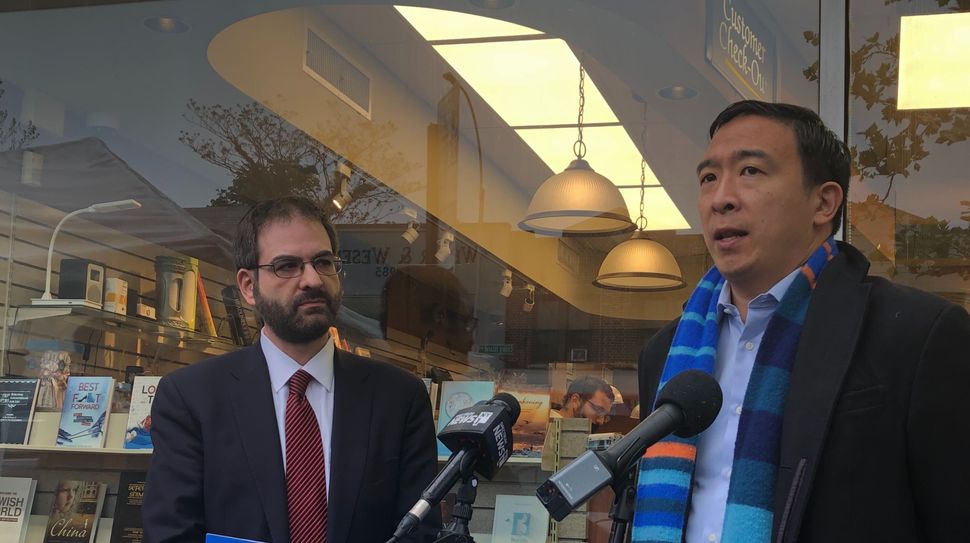 Andrew Yang, the frontrunner in the race for NYC mayor, bolstered his support in the Orthodox community in Brooklyn on Wednesday with the backing of two elected officials who carry considerable clout.

Kalman Yeger and Simcha Eichenstein, a City Council member and a state Assembly member respectively, representing the neighborhoods of Borough Park and Midwood, said Yang stood out as a fresh face and a leader who will treat their community with respect.

“What Andrew Yang gives more than any other candidate is a reason to believe that our community has a future in this city,” Yeger told reporters at a press conference with the candidate outside Eichlers Judaica in Midwood.

“We are not looking to cut the line. I’m not looking for more than our fair share. But we don’t want less. We certainly don’t want to be treated worse because of who we are,” he said, referring to the crackdown and harsh restrictions imposed by Gov. Andrew Cuomo and Mayor Bill de Blasio on their neighborhoods during the coronavirus pandemic. 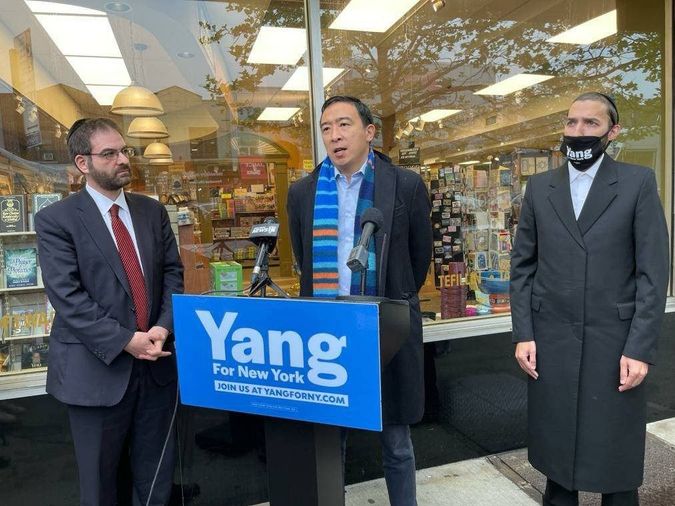 Yang has aggressively courted the city’s Orthodox Jews in recent months. He has continuously defended the yeshiva education system and took a bold stance labeling the Boycott, Divestment and Sanctions movement as antisemitic. Last week, Yang secured the backing of leading Hasidic sects in Borough Park, locking up a major voting bloc in the June 22 Democratic primary. “We now have an unprecedented coalition of support from New York’s Jewish community that is going to be the bedrock of our campaign to move New York forward and out of this crisis,” Yang said in a statement.

Yang told the Forward on Wednesday that the positions he has taken in defense of the community are not pandering for votes. “One of my habits is to express what I actually think,” he said, adding with a chuckle, “I find it’s much easier to remember what I said.”

He also sought to distinguish himself from other candidates who have courted the Orthodox voting blocs in recent weeks and from pre-election commitments by elected politicians in the past. “I cannot wait to actually demonstrate my commitment to some of those principles when I am mayor,” he said. “My commitments will be borne out through action.”

Both Cuomo and de Blasio received overwhelming support from the Orthodox community in their respective re-election bids in 2014 and 2017, but these relationships have soured since the COVID-19 outbreak. Last year, Cuomo drew backlash for his restrictions on houses of worship and Yeger called out de Blasio for singling out the Orthodox community for non-compliance with social distancing guidelines.

Speaking with the Forward, Yeger praised Yang for not backing down in the wake of fierce pushback. “I want a mayor to tell me what he thinks, and to continue in accordance with his thinking,” he said.

Eichenstein said that Yang has done the opposite of pandering. “He does not say one thing in one room and another thing in a different room,” he said. “I’ve seen him double down. He sticks to his positions unapologetically, not moving an inch — and that’s what’s refreshing.”

Yang said that he has “enjoyed every moment” he has spent in the Orthodox community.

At one point of the press conference, Yang joked that the two elected officials offered so much praise that he would consider using them as surrogates in future appearances.