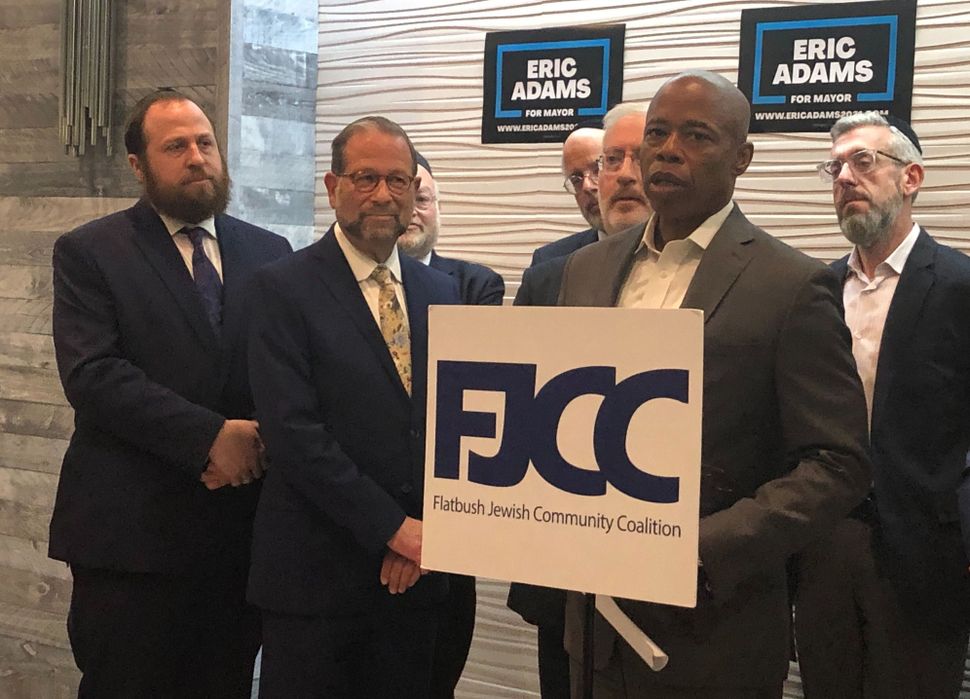 Eric Adams, the front-runner in the race for mayor of New York City according to recent polls, had some harsh words Thursday for the Orthodox voting blocs supporting his rival Andrew Yang, who is in second place, not far behind Adams.

In a meeting with the leadership of the Flatbush Jewish Community Coalition, a local Orthodox political group founded in 2013, Adams suggested that Orthodox voting blocs are mistakenly falling for the “false promises” Yang made while courting their vote. Adams has been making inroads in the Orthodox community in recent weeks.

“If someone can come in, out of nowhere, give you false promises and just say anything, and all of a sudden take away a long relationship with you, that’s going to send a bad message,” said Adams, the Brooklyn borough president, who described his well-established relationship with the community as an inspiration for other politicians.

Asked by the Forward if he was referring to Yang’s stances on yeshivas that had earned him the backing of most Hasidic sects and Orthodox elected officials in Brooklyn, Adams demurred. “Whoever believes they can just walk into this community and they can just say and do anything and then take away a long relationship and important relationship, whomever fits that description, that’s who I’m talking to,” said Adams. “And there’s a host of candidates that are in this race that thought they could just come and walk down Flatbush Avenue or walk down 14th Avenue, or sit inside a synagogue, and it was a wrap.”

Chris Coffey, Yang’s campaign manager, pushed back against Adams’ attack. “One of the things we hear about Eric from the community is that he has a complicated past here, filled with checkered characters who haven’t always been great to the Jewish community,” Coffey told the Forward, hinting about Adams’ past praise of the antisemitic Nation of Islam leader Louis Farrakhan and alliance with the Rev. Al Sharpton. “So it’s no surprise that when someone like Andrew Yang comes in and they see his character and his dedication to their issues that they gravitate to him.”

The FJCC announced at a press conference on Thursday that it will support Adams in the June 22 primaries because he has proved his friendship to the community in his past 15 years in elective office. “In considering mayoral candidates for endorsement, we looked for an experienced leader who could take the city out of its current crisis and help ensure a brighter future for our community and the entire city,” said Josh Mehlman, FJCC’s chair, who said the group represents over 250 synagogues and yeshivas in the greater Flatbush area.

“We believe in loyalty and supporting our friends,” Mehlman added.

Adams thanked the group for the endorsement, suggesting they overcame pressure to choose a different candidate. “In spite of people trying to sway you, you said, ‘Listen, we know Eric,’” he said, speaking about himself in third person. “Eric has been here during difficult times, Eric has stood with this community.”

Adams added that he’s been consistent throughout the campaign, not sending mixed messages to different communities, and that he’s going to govern on the basis of the partnerships he had developed with the communities over the years. “If you reach me late at night now, you are going to reach me late at night when I’m the mayor of the city of New York,” he said. “That is who I am.”

Chaskel Bennett, a local community leader, said the Orthodox community takes comfort in supporting Adams at a time of rising antisemitism. “For us, it’s about public safety, and Eric Adams is the public safety candidate,” he said.