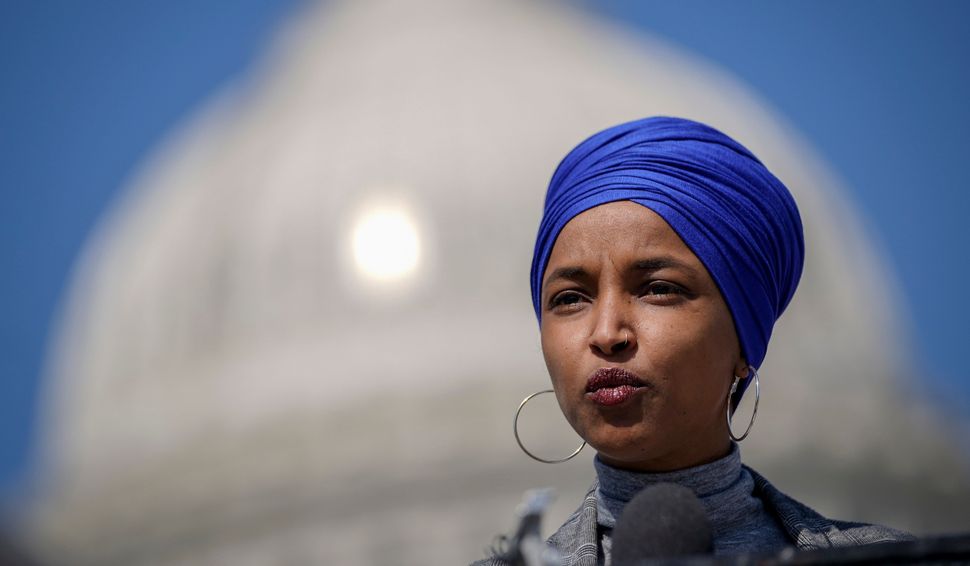 Rep. Ilhan Omar declined to apologize on Tuesday for comments she made earlier this month listing the United States and Israel alongside Hamas and the Taliban as entities that needed to be held accountable for what she called “unthinkable atrocities.”

Asked by Jake Tapper of CNN whether she regretted the comments, Omar said: “I don’t.” She said she was trying to make a point about the importance of the International Criminal Court as a place of redress for “people who have experienced injustice,” and said that fellow members of Congress who criticized her for the comments “haven’t been partners in justice.”

Twelve of the 25 Jewish Democrats in the House of Representatives signed a statement, accusing Omar of “giving cover to terrorist groups” by creating “false equivalence” between legitimate government military actions and terror attacks. They were reacting to a Twitter post by Omar, a Democrat from Minnesota, following an exchange with Secretary of State Antony Blinken about the Biden administration’s opposition to the International Criminal Court’s probe on alleged war crimes in the 2014 war between Israel and Hamas militants in the Gaza Strip.

“We must have the same level of accountability and justice for all victims of crimes against humanity,” Omar wrote. “We have seen unthinkable atrocities committed by the U.S., Hamas, Israel, Afghanistan, and the Taliban.”

The Jewish Democrats called her tweet “offensive” and demanded a clarification. In an interview with Tapper on CNN’s “The Lead,” Omar expanded her argument.

“I know that some of my colleagues don’t lend legitimacy to the ICC, but I tend to think that people around the world who have experienced injustice need to be able to have a place where they can go,” she said. “And, as a country that helped found the ICC and supported it, I think that it is really important for us to continue to find ways in which people can find justice around the world.”

“I don’t think that we will be able to keep the Progressive Caucus together in supporting one legislation while the other one is still being worked on,” says Democratic Rep. Ilhan Omar on the bipartisan infrastructure deal and the reconciliation plan. https://t.co/RWPOOai2jT pic.twitter.com/BKOFrLpU6h

Omar also accused her House colleagues of being unwilling to join the fight for justice. “I have welcomed any time my colleagues have asked to have a conversation, to learn from them, for them to learn from me,” she said. “I think it’s really important for these members to realize that they haven’t been partners in justice. They haven’t been equally engaging in seeking justice around the world. And I think I will continue to do that.”

She demurred when Tapper asked whether she understood why some American Jews felt alienated by some of her comments regarding Israel, particularly her 2019 tweet about congressional support for Israel being “all about the Benjamins,” which was widely condemned as antisemitic.

“I have obviously clarified and apologized when I have felt that my words have offended,” said Omar, who apologized for accusing the pro-Israel group AIPAC of paying politicians to support Israel. But she maintained that she has “yet to receive an apology” from House colleagues who she said have used “Islamophobic tropes.”

“I think, when we are engaging in a space where we don’t know how our language will be received, it is important for us to be open-minded,” Omar told Tapper. “And I think I have always been someone who is humbled, someone who understands how words can be harmful and hurtful to people. And I have always listened and learned and behaved accordingly and showed up with compassion and care.”