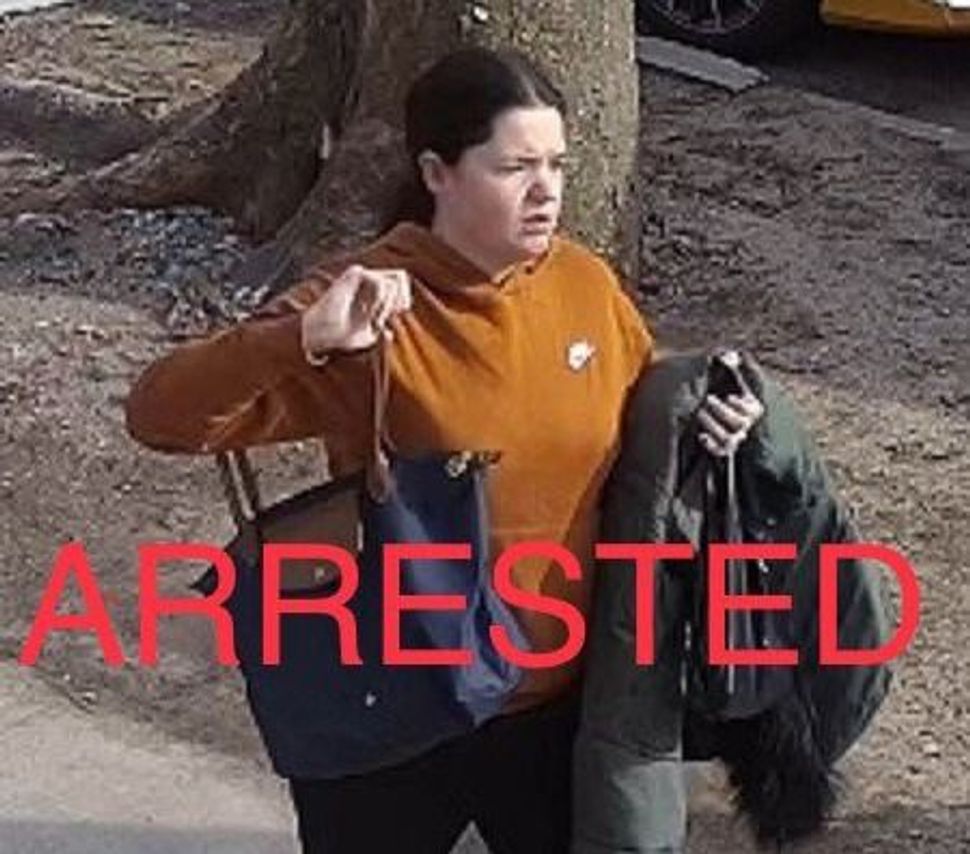 New York City police identified this woman as Christina Darling of Brooklyn, and arrested her for threatening to kill three Jewish siblings, 2, 7, and 8, and spitting in one of their faces on Jan. 14, 2022/Screenshot, tweet from NYC Police Department Hate Crimes unit

A 21-year-old woman was arrested Friday for hurling antisemitic invectives at three young Jewish children, threatening to kill them and the spitting in one of their faces.

The incident, captured on surveillance video, showed a woman yelling at siblings – 8, 7, and 2 – outside a Brooklyn synagogue, “Hitler should have killed you all. I’ll kill you and know where you live.” She then spat in the face of the 8-year-old boy before fleeing.

The woman, identified by police as Christina Darling, was charged with aggravated harassment as a hate crime, acting in a manner injurious to a child and menacing.

The incident occurred on Jan. 14 in front of Kehal Tiferet Avrohom Ziditshov, an Orthodox synagogue in the Marine Park section of Brooklyn, about five blocks from Darling’s home.

Darling, a psychology student at St. Francis College in Brooklyn Heights, was also photographed fleeing the scene. Police credited the public with helping them to make the arrest.

Former Brooklyn Assemblyman Dov Hikind, who founded the grassroots coalition Americans Against Antisemitism, asked on Twitter, “What in G-d’s name is going on in this country that an adult would target innocent kids with such hatred?” And in a video, he said: “Antisemitism is out of control. … We need to address where this Jew hatred is coming from. How many of this 21-year-old’s friends have the same feelings about Jews?”

The children’s father, Aryah Fried, told WCBS-TV, “I would hope that she understands the severity of what she did. To do it to anybody is obviously problematic, but for an adult to do it to a child is just beyond crazy.”

After Darling’s arrest, a Jewish student at St. Francis College launched a petition on change.org encouraging the school’s president to expel Darling. The petition reads: “St. Francis College has a strong policy against all forms of bullying, racism, antisemitism, and acts of violence rooted in hatred and bigotry. I urge President Miguel Martinez-Saenz to stand by his promises and denounced this horrifying act of racism, bigotry and harassment against the Jewish people. If appropriate disciplinary action isn’t taken, an egregious precedent will be set.”

More than 2,890 people had signed the petition by Friday afternoon.

St. Francis College officials did not immediately respond to an inquiry from the Forward but sent an email to staff and students in the wake of the arrest. “St. Francis College is aware of the situation and shares in your outrage at the incident and allegations. For our community, this behavior, as witnessed, is beyond inappropriate and we stand with all of you as we denounce this horrifying act of racism, bigotry, and harassment against the Jewish people.”

The statement continued: “Allegations such as these strike at the heart of the Franciscan values we hold dear and will be handled accordingly.”