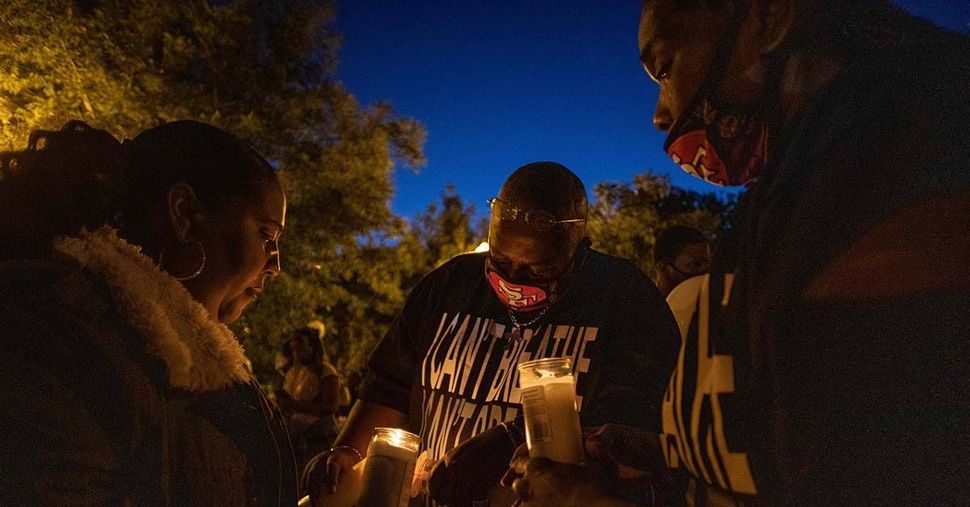 People light candles during a vigil around a makeshift memorial at the tree where Robert Fuller was found dead outside Palmdale City Hall on June 13, 2020. By Apu Gomes/AFP via Getty Images

In the first hours of 2020, I called the NYPD to confirm that a Jewish 15 year-old had been held up at knifepoint on a public bus.

“Wow. There’s a lot of this stuff happening. What the hell,” was the officer’s response.

He confirmed the incident, and told me I had missed another: in South Williamsburg, two women had approached a 22 year-old Hasidic man. One grabbed his cellphone and punched him in his throat. The other yelled, ““F—— you Jew” and “I will kill you Jews.”

The Jewish community was reeling and afraid. Four days earlier, a man had stabbed multiple Hasidim at a Hanukkah party in Monsey, New York. Long before anyone had heard of COVID-19, ADL vice president Oren Segal characterized the spate of antisemitic violence in New York as “an epidemic.” Five days later, tens of thousands marched in the streets of New York City to protest.

This pain and protest came to mind on Monday when the FBI released its 2020 hate crimes report. A casual glance at the report offers a bright spot — anti-Jewish hate crimes dropped 29% last year from 2019.

But hate crimes, overall, are on the rise, and 2020 was an anomalous year for crime generally because of the pandemic — plus, more recent reports from New York, Los Angeles and other police departments show a 2021 surge after the Israel-Gaza war in May.

This new FBI data, like all hate crime data, are somewhat helpful for understanding patterns, but do not even begin to accurately reflect the size and scale of the problem.

Policymakers, academics, civil rights groups and other experts I spoke to about the data all described a decades-long hate crime tracking enterprise plagued by system failures.

Thousands of U.S. police departments, year after year, don’t take hate crimes seriously enough to track and report them at all. Individuals who are most likely to be attacked because of their race, religion or sexual orientation often deeply distrust the authorities and don’t report hate crimes when they occur. And resources allocated to fighting hate crimes, distributed largely based on lawmakers’ understanding of available data, often don’t end up where they are needed most.

When data that directly affects policy isn’t accurate, everyone suffers.

Though anti-Jewish incidents comprise a small fraction of nationally reported hate crimes, in New York City, Jews are the No. 1 target, followed by LGBTQ people, Blacks and Asians. But the nature of the crimes differ sharply among these groups.

The majority — 55% — of anti-Jewish incidents reported to the FBI in 2020 were property crimes, like vandalism. Another 35% involved intimidation, and 11% assault.

This is not a new phenomenon. In general, “hate crimes directed against individuals are more numerous than property, but not so for the Jewish community,” Michael Lieberman of the Southern Poverty Law Center, told me.

“Jewish community centers, synagogues and day schools are more frequently targeted,” he added. “And that is just because the Jewish community has lots of institutions that are pretty public, pretty easily identifiable.” With notable exceptions, like 2018’s heinous mass shooting at the Tree of Life synagogue in Pittsburgh, visibly Orthodox Jews are the most frequent victims of violent anti-Jewish hate crimes. The reason is readily apparent: most Jewish Americans, without a kippah or obviously religious attire, pass as just plain white.

Members of other minority groups do not have the same luxury. The lion’s share of hate crimes reported in 2020 — 2,755 incidents, or 36% — were anti-Black. There were also 928 anti-LGBTQ hate crimes, 773 anti-white, 274 anti-Asian and 104 anti-Islamic incidents reported.

While the total number of reported hate crimes in 2020 increased by 6%, the number of anti-Asian and anti-Black hate crimes surged 70% and 40%, respectively.

“To see such a significant increase in such a quick time, and especially to see the increase in hate crimes against Asian Americans and African Americans,” is notable, said Phyllis Gerstenfeld, chair of Criminal Justice at California State University, Stanislaus.

And the majority of anti-Black hate crimes targeted people, not property: 32% involved assault, 45% intimidation, and 23% property destruction, damage or vandalism. More troubling, though, is that the FBI data only capture the tip of the iceberg. The report has serious limitations, and those limitations have serious implications.

Not a single expert I’ve interviewed expressed confidence in the FBI data’s accuracy.

“What we’ve seen over the course of 30 years is consistent under reporting,” Lieberman told me.

While it can be helpful for identifying trends, Gerstenfeld said, “as far as trying to get a real handle on exactly how many hate crimes are happening out there, and exactly who the victims are, I don’t find that reliable in that regard at all.”

Lauter was more blunt: “The data is important, but it’s not pure.”

That brings us to what I call The Miami Problem: accurately collecting hate crime data requires that people targeted by hate trust the police. But in order for that trust to be established, police departments must first signal that they take hate crimes seriously.

“This year, and in many years in the past, the city of Miami has affirmatively reported that they have zero hate crimes,” Lieberman pointed out. “So if you live in Miami, and you’re in any way reluctant to report a hate crime anyway, why would you call the police?”

He added: “A large city that, year in and year out, does not report data to the FBI – or affirmatively reports zero hate crimes – does not inspire confidence that they are ready and able to address hate violence.”

Many of the most frequently targeted groups also have concerns about immigration status, general distrust of the police or cultural taboos that make them wary to report incidents to the authorities.

This leads to massive underreporting of hate crimes — with one significant exception: Jews.

Especially in New York, “the relationship between the Jewish community and police is exceptionally strong, a very positive relationship,” Lauter told me. “So that underreporting issue just does not exist.”

Lauter described an illuminating incident at a community meeting her office organized in Brooklyn. A Jewish leader said that what the city really needed to do to address hate crimes was increase police presence. A Black leader responded that this was the last thing his community wanted.

Both were incredulous. “The Jewish person was sort of taken aback, like they had never heard that narrative or had not paid attention to it,” Lauter recalled.

Understanding these differences — and what the data miss — is crucial. It affects not only what crimes get counted, but where resources meant to stop those crimes from occurring are allocated.

In other words, groups that have good relationships with police and other government agencies, and who effectively lobby for crimes against them to be counted and addressed — like the Jewish community — end up with more resources than those that do not.

Government officials tend to “do what looks good, without any consideration for what’s really going to work,” said Gerstenfeld, the Cal State expert. Better data is the first step to addressing this problem.

Lieberman, of the Southern Poverty Law Center, pointed to the Covid-19 Hate Crime Act — which calls for increased law enforcement training, hate crime hotlines and victim services — as a positive example of how documenting hate crimes, in this case involving Asian-Americans, can result in meaningful policy changes.

But training police departments and building community relationships with government agencies is bandaging a bullet wound while the gunman roams the streets.

“We need to do more in terms of education,” Lauter said, to address the sources of hate before they can fester and spread.

She cited the Jewish community’s advocacy of Holocaust education as an example of helping people understand the consequences of hate and the impact it can have on a community, and told me she’s been working with Asian American leaders to do more in schools as well.

Keeping the pressure on politicians and agencies to do more is vital. It’s also critical not to become so entranced by upticks or downswings in the data that we tune out the cries of those who are suffering.

“I know how unbelievably impacted people are individually when they are targeted by crime,” said Lauter.

It’s a healthy sign of democracy, she adds, when we “care about the populations that are most vulnerable to hate, and try to do something about it.”