A complete list of every time RFK Jr. has compared vaccine mandates to the Holocaust 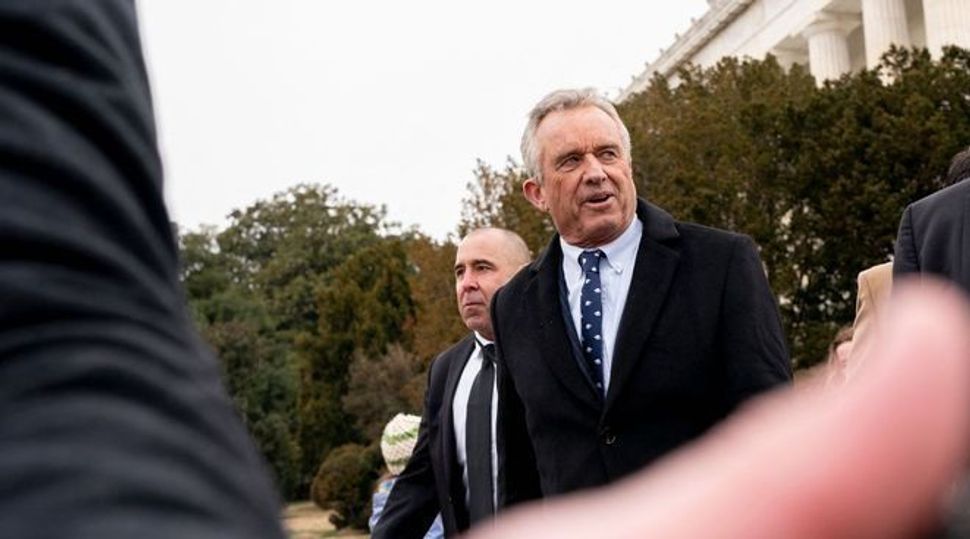 Robert F. Kennedy Jr. departs after speaking at the Lincoln Memorial to a rally against vaccine mandates in Washington, DC, Jan. 23, 2022. Photo by Stefani Reynolds/Getty Images

Robert F. Kennedy Jr. compared the threat of 5G cell service and so-called vaccine passports to the Third Reich on Sunday, in his latest instance of invoking the Holocaust while peddling conspiracies theories about vaccines.

“Even in Hitler’s Germany, you could cross the Alps into Switzerland, you can hide in the attic like Anne Frank did…Today the mechanisms are being put in place that will make it so none of us can run, none of us can hide,” Kennedy said in a speech at an anti-vaccination rally in Washington, D.C.

It wasn’t Kennedy’s first time making such a comparison, although it might have been his most inflammatory to date.

In 2015, the vocal anti-vaxxer, who is the son of Robert Kennedy and nephew of President John F. Kennedy, used the word “holocaust” to describe proposed legislation mandating vaccines for children, which he tied to autism.

“They get the shot, that night they have a fever of a hundred and three, they go to sleep, and three months later their brain is gone,” The Sacramento Bee quoted Kennedy as saying at a screening of an anti-vaccination film in the city. “This is a holocaust, what this is doing to our country.”

In August 2020, Kennedy spoke at a rally organized and attended by a number of antisemitic and neo-Nazi groups. Kennedy is suing to identify an anonymous blogger at the Daily Kos, a group blog and internet forum focused on liberal politics, who pointed this out in a blog post. Kennedy’s lawyer has denied the accuracy of the blog post, despite eyewitness testimony, and threatened to bring a libel claim.

And most recently, in November 2021, Skyhorse Publishing published a book by Kennedy in which he spread conspiracy theories about COVID-19; one chapter is titled “Final Solution: Vaccines or Bust,” a clear reference to the Nazis’ plan for carrying out the genocide of the Jewish people. When asked about that chapter title, Kennedy — whose wife, Cheryl Hines, plays Larry David’s non-Jewish wife on “Curb Your Enthusiasm” — said he didn’t “think the vaccines have anything to do with eradicating the Jews,” according to The Guardian.

Kennedy’s latest remarks come just three days after the 80th anniversary of the Wannsee Conference, during which 15 high-ranking Nazis planned the final solution — the mass killing of Europe’s Jews — while nursing cognac, and four days before International Holocaust Remembrance Day is observed on Jan. 27.

A complete list of every time RFK Jr. has compared vaccine mandates to the Holocaust