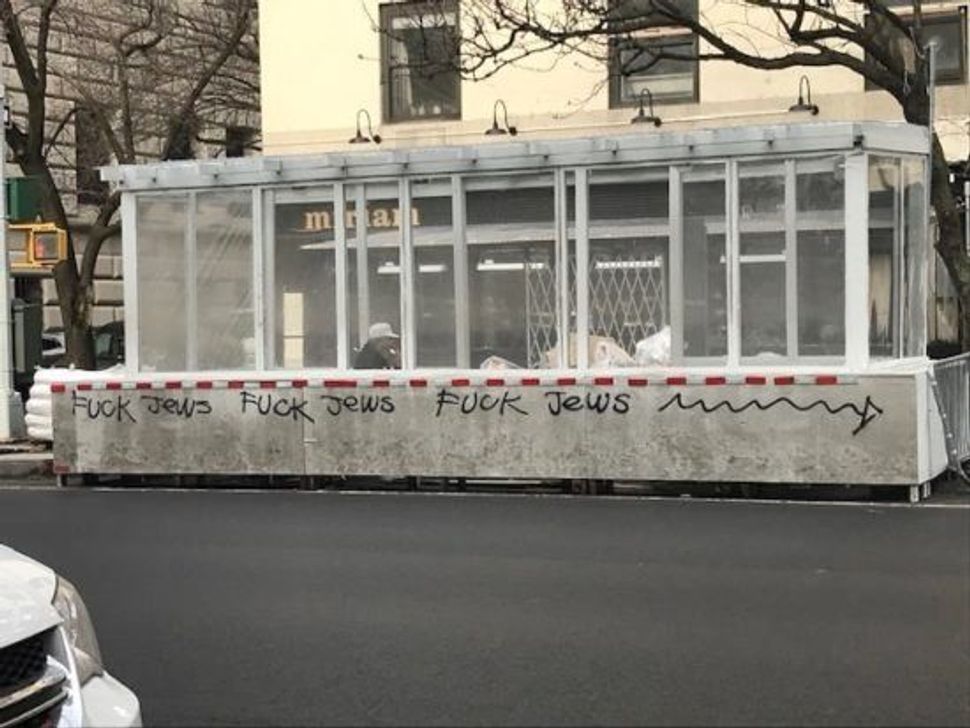 The outdoor area of Miriam restaurant on NYC’s Upper West Side was sprayed with “f—- the Jews” graffiti. By West Side Rag

This story was updated on Feb. 18.

Miriam had been open for less than a month before someone sprayed it with antisemitic graffiti.

On Thursday morning, the staff found “f— Jews” spray painted at least three times on the perimeter of the Upper West Side restaurant’s outdoor dining area.

It was “sad to see,” said owner and chef Rafael Hasid. “Why do people have to hate so much?”

“I’m not telling my family about it,” he added, because he does not want to worry his mother who lives in Israel. “When you’re farther away, everything seems to be worse than what it really is. I don’t want to get her upset.”

Hasid has been in the United States for 22 years and opened the popular Park Slope branch of “Miriam,” known for its Israeli food and brunch scene, 17 years ago. He told me this incident is not the first time his restaurants have been targeted.

“It’s not a nice thing to have as a restaurant owner, but life goes on. We’re just going to paint over it and hope it doesn’t happen again.”

Also on Thursday morning, the head of Park East Synagogue’s security team discovered that a few vehicles parked near the building had been marked with antisemitic graffiti. The tags included the words and phrases “f— Jews,” “f— Jewish” and “incest,” according to police. Both investigations are ongoing and no arrests have been made.

“This happened under a cloud of great concern about antisemitism, but now it’s really on our doorstep,” Park East Cantor Benny Rogosnitzky said on Friday.

The synagogue, which also runs a school several days a week, will hold a security training meeting for congregants next week. Though scheduled months ago, the event has seen dramatic uptick in enrollment following last month’s Texas synagogue attack.

According to the latest FBI hate crimes data, the majority of anti-Jewish incidents in the U.S. are property crimes. But some residents are on edge following recent violent attacks on Jews, particularly on Orthodox Jews in Brooklyn.

“I just hope nothing worse than this will happen,” said Hasid. “As long as no one gets hurt physically, I can put it behind me and keep on going.”