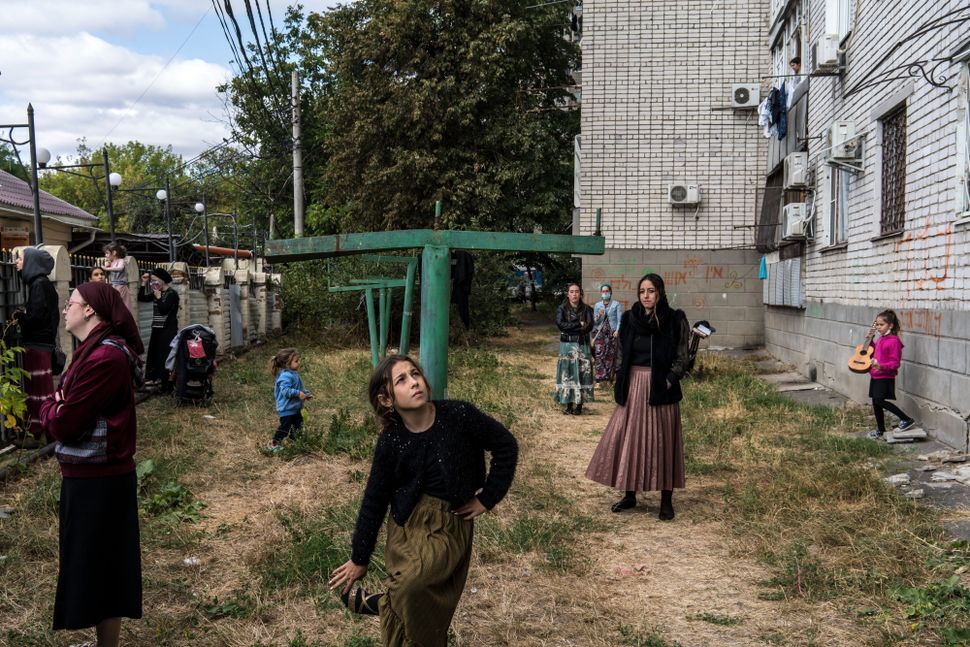 UMAN, UKRAINE - SEPTEMBER 18: Hasidic women and children gather in an area separate from the men during the annual Jewish pilgrimage on September 18, 2020 in Uman, Ukraine. Despite travel restrictions imposed by Ukraine meant to curb the spread of Covid-19, a few thousand pilgrims have managed to arrive in Uman for Rosh Hashanah. Uman is home to the tomb Rabbi Nachman of Breslov, founder of a prominent Hasidic movement. By Brendan Hoffman/Getty Images

For those looking for ways to help Ukrainian Jews, the Forward has compiled a list of organizations that are assisting them or collecting money for nonprofits on the ground.

A country of 44 million people led by a Jewish president, Volodymyr Zelensky, Ukraine’s rich Jewish history dates back many centuries — Odessa was once the center of Jewish life in the Southern Russian empire — and has produced countless influential world figures, among them Golda Meir, Sholem Aleichem, and Haim Nahman Bialik.

Today, tens of thousands of Jews live in Ukraine, mostly in four major cities — Odessa, Kharkiv, Kyiv and Dnipro. (Hundreds of thousands more are estimated to be aliyah-eligible, meaning they have one Jewish grandparent.) Suddenly imperiled by the Russian invasion, many are fleeing for the country’s borders. Others are sheltering in basements or looking for other refuge.

Project Kesher supports Jewish women and girls in Eastern European countries, and is fundraising for Ukraine. From its fundraising page:

Project Kesher is meeting the needs of women and girls in Ukraine as they face the current crisis and the fallout, including those who need to relocate. The funds will follow the people in need.

Current needs include transportation and accommodations for those who are fleeing cities under attack. Future needs are hard to determine at this time, but we are in daily touch with our leadership in Ukraine. Whether people choose to stay or evacuate, Project Kesher will be with the women wherever they are.

According to a press release, NATAN, an Israeli all-volunteer organization of medical and health professionals, will partner with the WHO, the US-based aid group Operation Blessing and the Mexico-based aid group CADENA, in coordination with Polish authorities, to deliver emergency care as well as food, hygiene, medical and other relief supplies to help approximately 500,000 Ukrainian refugees fleeing the violence.

HIAS, formerly the Hebrew Immigrant Aid Society, is an American Jewish nonprofit that assists refugees around the world.

A HIAS representative said in an email that a mission will arrive on the ground in Moldova this weekend; it has already sent money to Jewish organizations in those countries that have been taking in Ukrainian refugees.

HIAS is also rushing emergency funding to its longtime partner organization in Ukraine, the Kyiv-based NGO Right To Protection (R2P), which has 162 staff members on the ground.

ORT, a 100-year-old international education network driven by Jewish values, has five schools and two affiliated schools in Ukraine serving over 8,000 students. With those schools closed, ORT is focusing on providing food and emergency supplies.

Dnipro, Ukraine, is the home to the largest Chabad center in the world, with over 100 Lubavitch families calling it home.

And in Odessa, where Chabad runs several orphanages, the city’s chief rabbi Rabbi Avraham Wolf said he was staying partly to protect the 120 children who live there.

You can donate to Rabbi Wolf’s orphanage here.

Additionally, Chabad is collecting money for Ukraine relief, and you can donate here.

The JDC, a leading Jewish humanitarian organization, is also raising money for Ukraine. According to its website, JDC provides a variety of care services for an estimated 40,000 Jewish elderly and 2,500 poor Jewish children across 1,000 locations in Ukraine.

“In the tense months leading up to the current crisis, JDC was already addressing dire economic needs among Ukraine’s poorest Jews in the face of sharply rising food, medicine, and utility prices,” the website says. In light of the Russian invasion, JDC is coordinating further services to the needy.

Learn more and donate to the JDC here.

The World Union for Progressive Judaism, which is the international network of the Reform, Liberal, Progressive and Reconstructionist movements, has launched a Ukraine crisis fund.

According to the organization’s website, donated “money will be spent on individuals and communities to ensure their safety and well-being.”

Go here to donate to the WUPJ Ukraine Crisis Fund.

The Survivor Mitzvah Project provides emergency aid to Holocaust survivors in Eastern Europe living in poverty. According to the nonprofit’s website, 100% of donated money goes to those survivors.

The OU, the flagship organization of Orthodoxy in America, has created a crisis fund to support Jews in Ukraine.

The Jewish Agency for Israel

The Jewish Agency for Israel is in the process of setting up aliyah processing stations along the Ukrainian Border in Poland, Moldova, Romania and Hungary. A press release from the Jewish Agency says it is preparing to temporarily house olim in those countries.

United Hatzalah’s medical assistance and humanitarian aid mission is providing emergency medical treatment and humanitarian relief to thousands of Ukrainian refugees currently entering Moldova. Included in the mission is equipment brought in from Sheba Medical Center in Israel, which will enable expert physicians from Israel to conduct telemedicine procedures in Moldova coordinating with Hatzalah personnel.