Zelenskyy to speak to Congress, but not at Yad Vashem 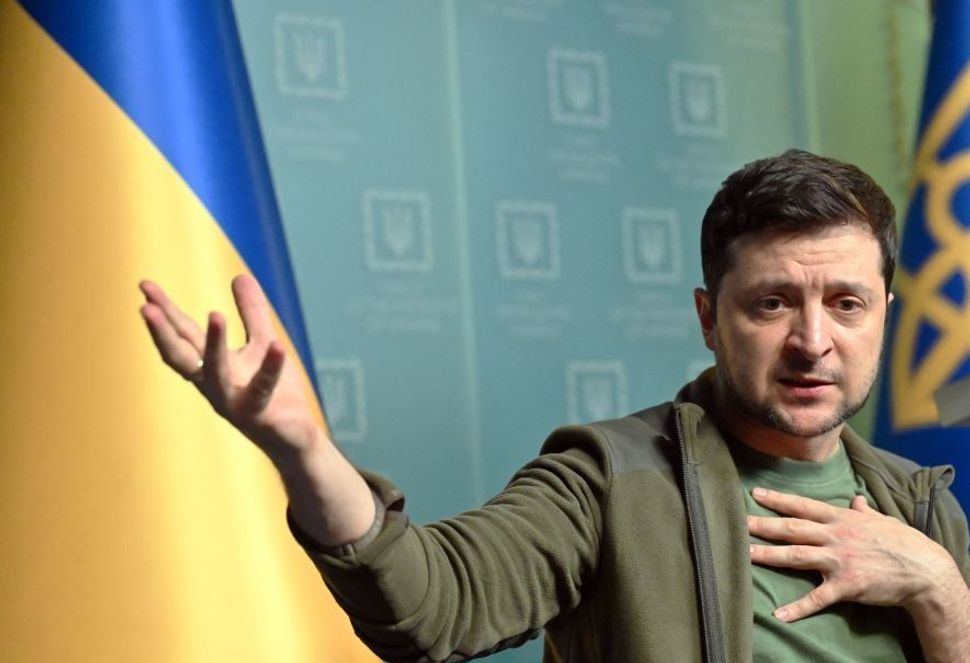 Ukrainian President Volodymyr Zelenskyy gestures as he speaks during a press conference in Kyiv on March 3. Photo by Sergei Supinsky/AFP via Getty Images

Ukrainian President Volodymyr Zelenskyy will speak remotely to a joint session of Congress on Wednesday. But he will not speak or hold a mass rally at Israel’s Yad Vashem, as Ukrainian officials had requested, the Israeli news outlet Walla reported on Sunday.

According to Walla, Yad Vashem Chairman Dani Dayan turned the Ukrainian request down in a meeting with the country’s ambassador to Israel, Yevgen Kornichuk, saying he didn’t want the renowned Holocaust memorial and museum to be politicized.

In an email to the Forward, Yad Vashem spokesperson Simmy Allen wrote that Dayan did not reject the Ukrainian request but instead explained that a mass rally attended by members of the Knesset and other politicians and public officials “would not be possible.” Allen said the museum and Kornichuk have agreed to remain in conversation in the coming days. It is not clear whether there are any circumstances under which Yad Vashem would permit Zelenskyy to speak there, presumably by video.

Dayan expressed support for Ukraine in a meeting with the country’s ambassador to Israel, Yevgen Kornichuk, but said he did not want Yad Vashem to be used to draw more analogies between the war in Ukraine and the Holocaust, according to Walla.

Yad Vashem, which is dedicated to memorializing victims of the Holocaust and to preventing future genocides, has condemned Russia’s invasion of Ukraine but also rejected what it calls “completely inaccurate comparisons with Nazi ideology and actions” made by those on both sides of the conflict.

Russian President Vladimir Putin has claimed he was launching the invasion in order to bring about the “denazification” of Ukraine, a country with a democratically elected Jewish president and a Jewish prime minister. Russian propaganda has depicted Zelenskyy and other Ukrainian leaders as Nazi sympathizers.

Zelenskyy has compared the invasion to genocide and Russia to Nazi Germany.

Allen wrote that misusing Holocaust-related symbols and rhetoric distorts the accuracy and legacy of the Holocaust, “the unprecedented attempted annihilation of the Jewish people and the eradication of its culture.”

A Ukrainian official, who spoke on the condition of anonymity with Ha’aretz, expressed strong disappointment with the decision and accused Yad Vashem of a pro-Russian bias.

“They were dealing with the corrupt money of Russian oligarchs. That’s why they are problematic. Nobody else can talk about genocide but them,” the official said.

Allen wrote that Yad Vashem has and would never “accept a donation that has strings attached.” Last week, the memorial suspended its philanthropic partnership with Abramovich. While the oil mogul has denied ever being part of Putin’s inner circle, British court documents describe his “privileged access” to Putin over the years.

Before the partnership was suspended, Abramovich had pledged tens of millions of dollars to Yad Vashem. The memorial has also received donations from other Jewish Russian billionaires connected to Putin, including Moshe Kantor, who in January 2020 helped fund Yad Vashem’s World Holocaust Forum.

The event was attended by dozens of world leaders, including Putin, and criticized for overemphasizing Russia’s role in defeating the Nazis and downplaying historical facts unflattering to Russia.

Yad Vashem apologized for “inaccuracies” and “partial” facts in videos presented at the ceremony, which Raz Segal, who directs the Master of Arts in Holocaust and Genocide Studies program at Stockton University, referred to on Twitter as a “political event.”

A political event at Yad Vashem?? You mean like the one in which Putin spoke and distorted history in January 2020? Or like the ones in which army generals and heads of states perpetrating genocidal violence visit Yad Vashem, like those from Myanmar in 2015? Dayan, we remember https://t.co/WbDA3Va5aZ

Segal suggested that it was hypocritical of Yad Vashem — two years after the 2020 event — to block Zelenskyy from speaking at the memorial, which is in Jerusalem.

Zelenskyy will, however, speak virtually to members of Congress on Wednesday morning. The video call, which will be closed to the public, follows a Zoom call held earlier this month between the Ukrainian president and about 300 members of the House and Senate.

“The Congress remains unwavering in our commitment to supporting Ukraine as they face Putin’s cruel and diabolical aggression, and to passing legislation to cripple and isolate the Russian economy as well as deliver humanitarian, security and economic assistance to Ukraine,” Speaker Nancy Pelosi (D-Calif.) and Senate Majority Leader Charles Schumer (D-N.Y.) wrote in a joint letter announcing the virtual address.

“We look forward to the privilege of welcoming President Zelenskyy’s address to the House and Senate and to convey our support to the people of Ukraine as they bravely defend democracy.”

Zelenskyy to speak to Congress, but not at Yad Vashem