Yeshiva’s Ryan Turell declares for the draft, could become first Sabbath-observant Jew in the NBA 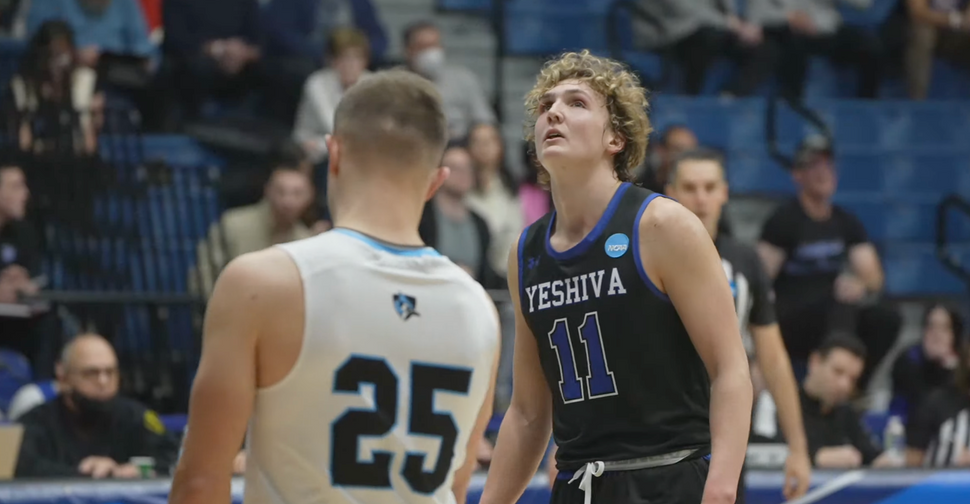 Ryan Turell (11) declared for the NBA Draft on Tuesday. Courtesy of Screenshot/MacsLive.com

After a season leading the nation in scoring and his Yeshiva University team into the record books, Ryan Turell declared for the NBA Draft Tuesday, formalizing his intent to become the first Orthodox Jewish player in the history of the league and one of the few Division III stars to make the leap.

Turell, a 6’7” forward who wears a yarmulke on the court, was a major reason the Maccabees rattled off 50 straight wins, the second-longest win streak in college basketball history.

Turell announced he was turning pro in an interview with ESPN draft czar Jonathan Givony.

Averaging 27.1 points per game this season, which led all NCAA men’s athletes, Turell became a national sensation as the face of a dominant squad of Jewish athletes. As the team extended their winning streak and vaulted up the Division III rankings, the Macs, as they are generally known, were featured on ESPN, in The Wall Street Journal and by the NBA’s social media channel.

Growing with the team’s celebrity was Turell’s. He was profiled in The New York Times in an article titled “The Nation’s Top Scorer Plays for a School and a People.”

And the Los Angeles Times, in an article on Turell’s draft potential, reported that at least two NBA teams had requested game tape of Turell, with an anonymous league executive reportedly saying, “Ryan is certainly on the radar.”

Turell, who hails from the Los Angeles area and attended Valley Torah High School, has a deep offensive arsenal — his strongest tools are footwork and feel. His greatest weapon isn’t the slam dunk — though he can definitely do that — but the bank shot.

He set Yeshiva’s single-game scoring record earlier this year with a 51-point effort against Manhattanville, and later in the season — before the Macs were eliminated in the NCAA tournament’s first round — became the school’s all-time leading scorer.

If drafted, he would become the second active Jewish NBA player, joining the Wizards’ Deni Avdija, and the only active Division-III alum.

Turell, who told ESPN he “plans on playing on Shabbat and walking to the gym,” would also be the first-ever Sabbath-observant NBA player.

He hopes to join a wave of Orthodox athletes threading the needle of Sabbath observance and elite sports competition.

In the last year, a pair of Orthodox Jews were drafted by Major League Baseball teams — one of them, pitcher Jacob Steinmetz is the son of Turell’s coach at YU. Hailey Kops, a figure skater who competed for Team Israel at the 2022 Olympics, walked to her performance, which took place on Shabbat.

There is no Jewish law prohibiting playing sports on Shabbat, though formal competition on Sabbath is a matter of debate because it could be seen as violating the spirit of Shabbat.

Yeshiva’s Ryan Turell declares for the draft, could become first Sabbath-observant Jew in the NBA