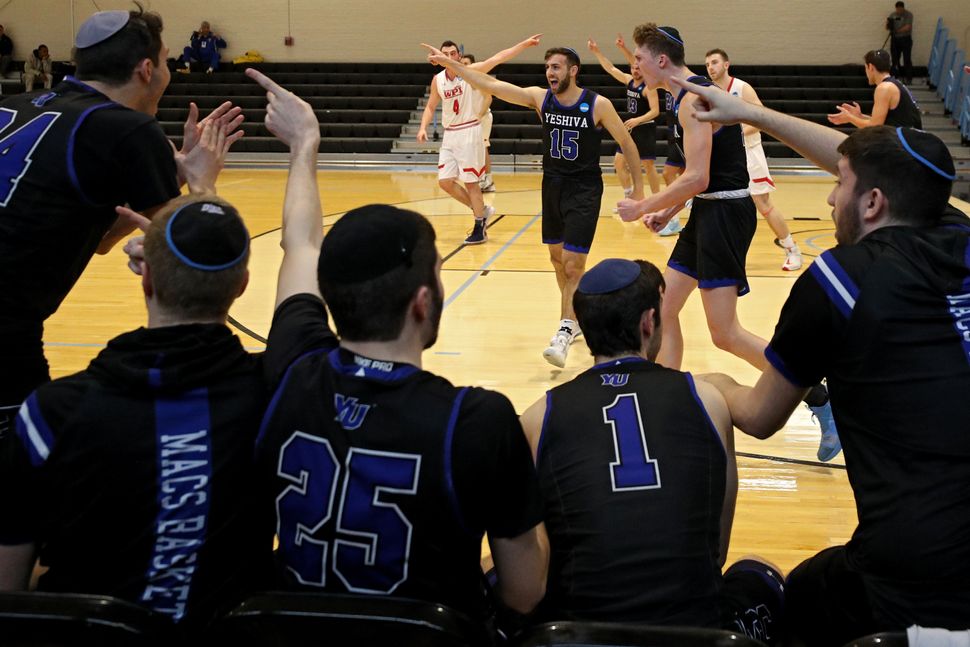 Lurking behind Yeshiva University’s 50-game win streak is a detail its detractors love to cite: the Maccabees haven’t faced a single opponent in Division III’s Top 25 since the streak began.

They finally will on Thursday night when No. 4-ranked Illinois Wesleyan University visits New York City for a showdown that will either fortify Yeshiva’s status as the most unbeatable college basketball team in the country — or topple it from its perch.

One podcaster has gone so far as to call the matchup “the most hyped, talked-about basketball game ever in Division III.”

Contrasts between the teams abound. IWU are perennial Final Four contenders, Yeshiva an upstart experiencing record-success. Yeshiva has one of the easiest schedules in college basketball, IWU one of the hardest. The Titans play in one of the largest arenas in Division III; YU’s gym, with just a few rows of risers, might be the smallest. There’s also the matter of headwear: most of the Macs, playing for the flagship school of Modern Orthodoxy and a metro area with 1.5 million Jewish people, wear yarmulkes on the court. The Jewish presence in Illinois Wesleyan’s home city of Bloomington, Ill.? About 80 families, one Reform synagogue, and one of the oldest continuously operating congregations in the United States. On Thursday, as the community’s basketball fans cheer on their local school, they’ll be in the unfamiliar position of rooting against the Jews.

With no prior history between the teams, and no common opponents, the outcome is anyone’s guess.

“You couldn’t pick two more different setups,” said Bob Quillman, an IWU alum and Division III basketball commentator who traveled to New York for the game. “That’s what makes it so exciting.”

Beth Robb has been an active member of her synagogue for decades. She is also an avid college basketball fan.

But on Thursday, Robb, who graduated from IWU and has lived in Bloomington since 1981, will be rooting for the Titans to end Yeshiva’s win streak. 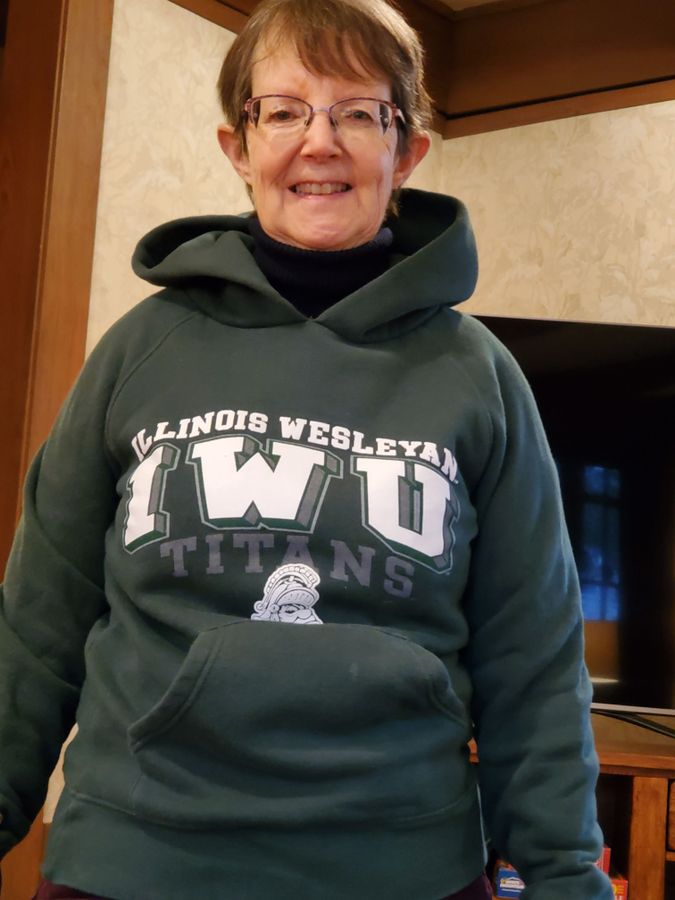 Beth Robb went to most Illinois Wesleyan games with her husband before the pandemic. Proudly Jewish and active in Bloomington’s community, she’ll be rooting against Yeshiva on Thursday. Courtesy of Beth Robb

Bloomington’s Jewish presence is by virtually any metric or heuristic the polar opposite of New York’s. There is no kosher delicatessen in town, or even much of a kosher aisle inside of a grocery store. But the community does have a Hebrew school and a rabbi — and a future. As lone congregations in comparably sized Midwestern towns have ceased operating in recent years, Bloomington’s Moses Montefiore Temple has kept going, sustained in large part by Illinois Wesleyan.

“We like to say that we are small but mighty,” Robb said of the local Jewish community.

Located halfway between St. Louis and Chicago, Bloomington’s Jewish community dates back to the mid-19th century. While the congregation has long since moved out of its first home, the Moorish-style building of rusticated limestone and stained glass that was built in 1889 still stands today, converted in 2001 to a single-family residence.

Robb says the Illinois Wesleyan basketball team has been a consistent source of pride to Bloomington over the years. And she is thankful for the school that brings new Jewish transplants to town at a steady trickle. Robb estimated about a third of the congregation’s members are university alumni or faculty.

“We’re it for each other,” said Robb. “You know, you don’t just drop your kid off at Sunday school in a place like this. You’re teaching on Sunday morning.”

She noted that Jewish communities in neighboring towns such as Decatur, Danville and Carbondale have dwindled to extinction in the last decade. But a committed group of lay leaders, some of whom are fourth-generation Bloomingtonians, keep the tradition alive.

“We’re it for each other,” said Robb. “You know, you don’t just drop your kid off at Sunday school in a place like this. You’re teaching on Sunday morning.”

What to watch for

In spite of inferior competition in the Skyline Conference (which to be fair, it has consistently routed), Yeshiva narrowly holds the nation’s top ranking and is hardly an underdog in this matchup. It will bring into the game arguably the best player in Division III, Ryan Turell, a 6’7” wing who scored a school-record 51 points in a game earlier this year and averages nearly 30. It will also have the advantage of what figures to be a raucous home crowd at the Max Stern Athletic Center in Washington Heights.

But the Titans will come in with a size advantage, experience playing on the road against formidable teams and perhaps the best center in the country, Matthew Leritz.

Leritz, who is one of two 6’7” upperclassmen in IWU’s starting five, will be a daunting matchup for 6’6” Yeshiva forward Gabriel Leifer, who anchors the Maccabees’ offense with Swiss-army versatility. Either player running into foul trouble could create a pivotal advantage for the opponent. 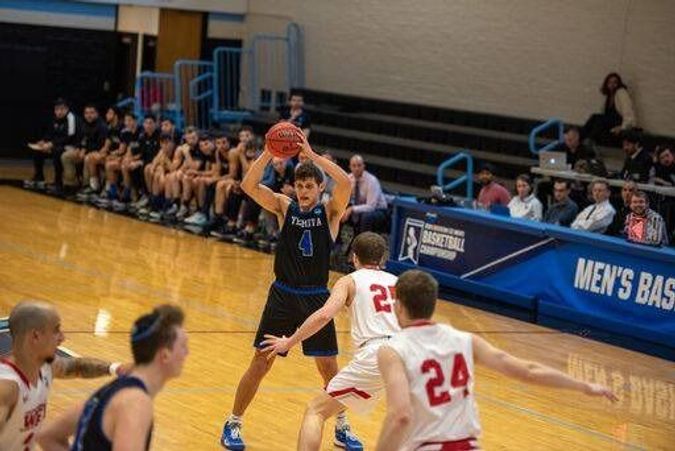 Yeshiva’s do-it-all forward Gabriel Leifer (#4) will play a key role in the game. Courtesy of Facebook

Or the game could hinge on how Turell fares against IWU’s Peter Lambesis, who Quillman touts as the best wing defender in Division III.

Turell is three inches taller than Lambesis, and he’ll likely try to exploit the difference in the post. But that’s the only size advantage Yeshiva will have in the starting lineups — the other Macs will spend the night looking up.

“We’re by far the biggest, most physical, strongest team Yeshiva has played in this streak,” Quillman added. “I want to see how that looks. Does Illinois Wesleyan in the first 10 minutes look bigger than Yeshiva — or not?”

A whale in a small pond

The matchup has heightened significance for Yeshiva, which comes into the game with one of the weakest schedules in Division III. Should it lose Thursday’s game, the Maccabees will have only one more opportunity to beat a ranked opponent and thus prove its mettle to the committee that decides NCAA Tournament seeding. Illinois Wesleyan has already played three ranked opponents this year, and though it has lost twice, the lone win puts them in comfortable tournament shape.

Yeshiva’s soft schedule — the school’s strength of schedule is ranked 396th out of 417 in D-III — isn’t entirely its fault. It plays in arguably the weakest conference in the division, and there aren’t many ranked Division III schools in the tristate area.

Quillman acknowledged the challenge Yeshiva faced in a tweet earlier this year: “Teams have dodged Yeshiva, but they haven’t dodged anyone.”

On the other hand, Illinois Wesleyan plays not only in a conference with multiple Top-25 teams, but also in the Midwest, where high-profile squads abound. The Titans’ strength of schedule is ranked 16th in the nation.

Should the Maccabees falter against IWU, they will be able to redeem themselves — and start a new streak — at home Jan. 2 against No. 17 Williams College.

But those two games are Yeshiva’s only opportunities to beat a regionally ranked opponent this season. Should it lose both, it would need to win the Skyline Conference tournament to be guaranteed a March Madness bid.

“If they win these games, they’re in great shape,” Quillman said.

Yeshiva (14-0) will tip off against Illinois Wesleyan (8-2) at 7:30 p.m. EST. The game will be televised on JLTV (channel information here) and streamed live on MacsLive.com, embedded below.