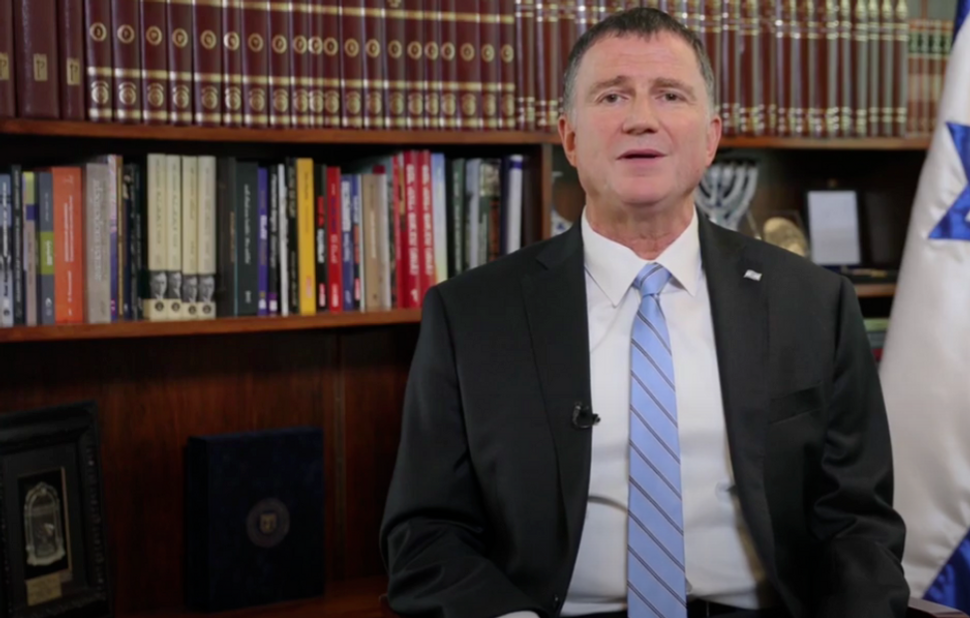 The war in Ukraine should prove to Israel that it can’t depend on the rest of the world for its survival, said a Ukrainian-born Israeli lawmaker and one of the most prominent refuseniks. It is also an opportunity for Israel to welcome thousands who are choosing to make aliyah, Yuli Edelstein, a member of the Likud Party, said in a Zoom call with the American Friends of Likud on Tuesday.

“We can say loud and clear, if push comes to shove and God forbid Israel will be facing an invasion of that kind, there will be a lot of nice speeches, there will probably be some supply of weapons, but no one is going to come to our rescue,” Edelstein said, referring to the response to Ukrainian officials’ pleas for more robust support from allies.

“What we have is the IDF. What we have is our Mossad, our security forces, our wonderful citizens. But that’s more or less what we have in the future conflicts that Israel, God forbid, will be facing.”

Edelstein, 63, was born in Chernivtsi, a city in Southwestern Ukraine that has sheltered citizens fleeing the Russian bombardment of major cities across the country. But he grew up in Russia. He was a key spokesman for the Jewish activists in the Soviet Union and suffered harassment, house arrests and interrogations by local authorities. Edelstein spent three years in a Soviet prison before immigrating to Israel in 1987. He has since served as speaker of the Knesset — the Israeli parliament — and is now challenging former Prime Minister Benjamin Netanyahu for leadership of the Likud.

On the call, Edelstein expressed sorrow for the plight of Ukrainians, but said he is encouraged by the influx of Ukrainian Jewish refugees seeking asylum in the Jewish state, and suggested more young Russian Jews will now seek to make aliyah too, understanding there is no future for them in Russia.

“I don’t like the circumstances, but the result is that we see new immigrants that come here looking for opportunities,” he said. It’s “an encouraging sign for our future here in Israel.”

Some experts have said that Russia’s attack on Ukraine could result in 100,000 people making aliyah.

Edelstein criticized the Israeli government for failing to take a firmer stance against Russian aggression and called Israeli Prime Minister Naftali Bennett’s recent visit to meet with Russian President Vladimir Putin Moscow a “pathetic” attempt “to poke our nose into this whole thing.” Bennett has offered to mediate between Russia and Ukraine. Both countries have been home, at one time, to millions of Jews. Today, more than 40,000 Jews live in Ukraine and more than 150,000 in Russia, but many more are eligible to emigrate to Israel under its Law of Return.

Israel finds itself walking a tightrope on Ukraine. While it has joined a U.N. resolution condemning the invasion, it has come short of condemning Putin. Russia’s influence in Syria has allowed Israel to carry out airstrikes on its hostile neighbor to the north.

Tom Nides, the U.S. ambassador to Israel, said in a separate Zoom call on Tuesday that the Biden administration has “no complaints” about Israel’s actions since the invasion began. In a conversation with members of the Americans for Peace Now, Nides said that Bennett “has not made a move” on Ukraine “without talking to the White House” and that the Israelis “have done everything we’ve asked them to do” in recent weeks.

Edelstein also expressed concern that its allies’ sanctions of Russia may be used as a precedent for groups “and even members of Congress” seeking to sanction Israel over the occupation of the West Bank and its treatment of the Palestinians.

“There’s no doubt that it’s something we have to deal with,” Edelstein said. But he also said it’s an opportunity for Israel to seek assurances from the international community that it will set “clear criteria” for imposing such sanctions against countries engaged in war.