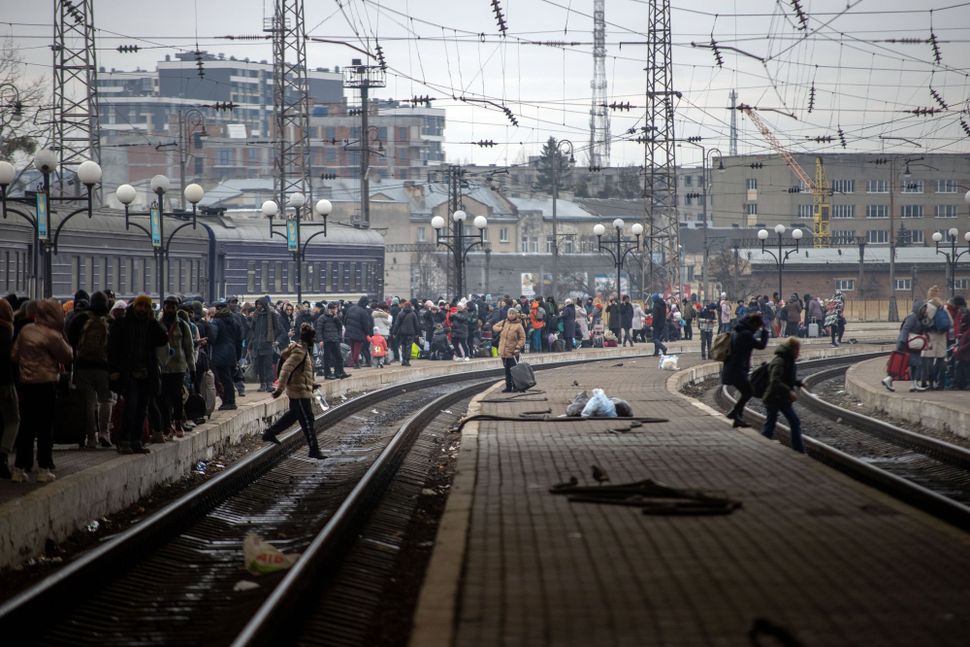 “If you don’t help us now, if you fail to offer a powerful assistance to Ukraine, tomorrow the war will knock on your door.”


Organizations like HIAS, the international refugee agency of the Jewish community, are only as strong as the funding and backing we get from governments and the international community — and only as persuasive as the voices of our supporters, who must demand decisive government action.

While the global refugee crisis was already out of control, the worst may be yet to come. The crisis in Ukraine poses an unprecedented challenge. A country of 45 million people has been invaded by a military superpower. We all have a role to play and sacrifices to make.

Zelenskyy’s warning is based on centuries of history and lessons we recently learned in Sudan, Syria, Venezuela and Afghanistan, which combined created 82.4 million refugees, the largest refugee crisis in world history. Nearly 29 million people crossed an international border seeking refuge or asylum.

For HIAS, helping Ukraine in particular is deeply personal. Over the last two decades, HIAS Ukraine has itself gone from being a foreign entity to becoming an independent Ukrainian organization, now known as “Right to Protection,” led and staffed by Ukrainians, most of whom have themselves already endured long standing forced displacement. To us, they are family.


When HIAS Ukraine (today R2P) was launched 22 years ago, HIAS was still helping Jews flee Ukraine due to antisemitic persecution. Today, the estimated 200,000 Jews in Ukraine are not in danger because they are Jews, but because they are Ukrainian.

In my first overseas trip during the pandemic, I participated in a commemoration of the 1941 Babyn Yar Massacre. I was grateful to witness, on the same trip, lives being saved through the humanitarian work of R2P in Kyiv and Slavyansk.

After the current conflict erupted, HIAS helped move R2P staff to safer places, where they are reopening operations to help internally displaced persons with food, provisions, and the documentation to help forcibly displaced persons who were already sheltering in Ukraine find safety elsewhere.

The flaw is that States that receive refugees by accident of geography are dependent on the good will of others to help them meet the needs of people fleeing danger.

We all need to demonstrate that good will.


The 1951 Refugee Convention, drafted largely by three Holocaust survivors, strives to ensure that no one of any religion, ethnicity, social group, political opinion or religion will ever again be trapped inside of a genocide.

Article 33 of the Refugee Convention — its key provision — drafted by Orthodox Rabbi Isaac Lewin — states that no signatory state may return a refugee to a place where they would face persecution.

While Europe has taken the lead on welcoming its Ukrainian neighbors, they may soon be overwhelmed. HIAS teams are on their way to border areas to see how we can support asylum seekers from Ukraine. Israel and the Jewish Agency are likewise sending people to help Jews who desire to make it safely to Israel.

The United States needs to likewise demonstrate its responsibility by contributing assistance to ensure the safe reception of refugees and asylum seekers in Europe.

As Zelenskyy warned, if we don’t provide military assistance, it is only a matter of time before this crisis knocks on our own door. The United States can support Ukraine’s European neighbors by welcoming the women, children, elderly and vulnerable people who have close family in the United States to join them here.

In addition, the United States and other countries should urgently offer resettlement to the 6,000 non-Ukrainian asylum seekers who fled to Ukraine seeking refuge and who now have to flee someplace else.

The U.S. should immediately grant Ukrainians who are already in the United States Temporary Protected Status to prevent them from being forced to return home before it is safe to do so.


We pray that this situation will be temporary, and that Ukrainians can all return home soon to a free and independent Ukraine. As it did with the thousands of Kosovar refugees who were evacuated to the United States from Macedonia in 1999, the U.S. can urgently resettle refugees to the U.S. with a clear offer to help them move back home voluntarily when it is safe to do so.

HIAS and the Jewish community have a role to play in welcoming the displaced from Ukraine through resettlement sites and expanding our network of welcome circles to help refugees settle in their new homes.