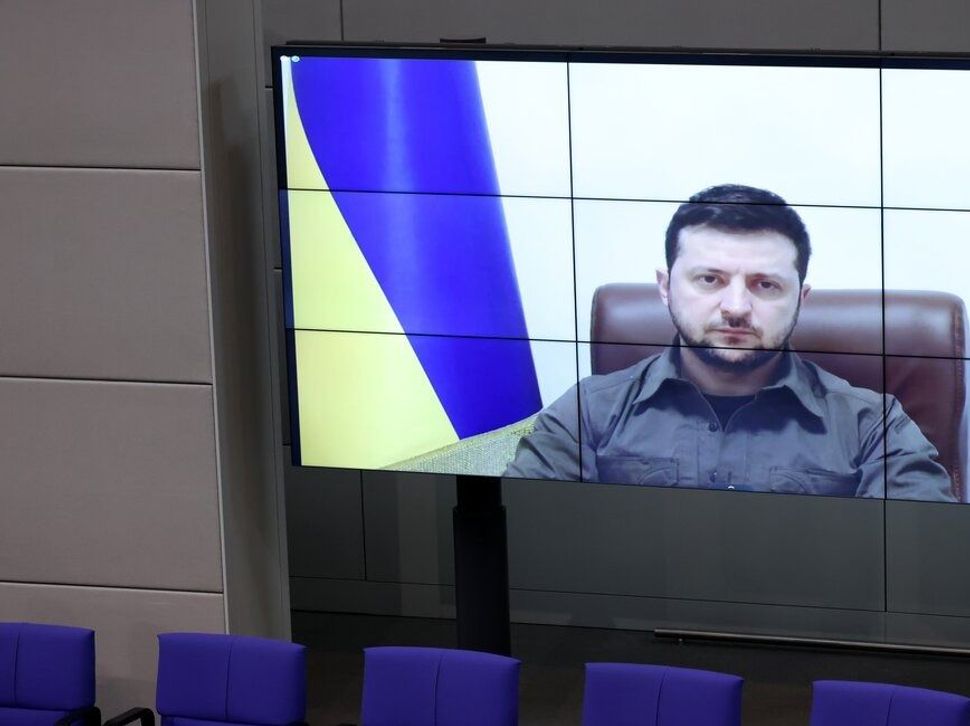 In a speech to the parliament of the nation that birthed Nazism, Ukrainian President Volodymyr Zelenskyy invoked the Holocaust on Thursday, criticizing Germany for failing to step the Russian assault on Ukraine.

“After 80 years, something like this happens and I am telling you: Every year politicians repeat the words ‘never again’ and now we see that these words are simply worth nothing,” Zelenskyy, who is Jewish, said in a virtual speech to the Bundestag, the German parliament.

According to the United Nations, about 700 civilians have been killed and more than 3 million people have fled their homes seeking safety since Russian President Vladimir Putin ordered the invasion of Ukraine last month.

Last week, speaking to Jewish American leaders, Zelenskyy compared the Russian bombardment of Ukrainian major cities and the targeting of civilians as they are being evacuated to the actions of the Nazi regime during World War II. “This is just pure Nazi behavior,” he said.

Zelenskyy urged German lawmakers to take a leading role in efforts to bring an end to the war, which began three weeks ago. “Give Germany the leadership role that it has earned so that your descendants are proud of you,” he said. “Support freedom, support Ukraine, stop this war, help us to stop this war.”

Since the start of the war in Ukraine, German Chancellor Olaf Scholz joined other European countries in pledging to deliver lethal weapons to Ukraine, supported the move to exclude Russia from the Swift payment system that eases international transactions and froze the Nord Stream 2 pipeline underneath the Baltic Sea, a project designed to double the flow of Russian gas to Germany But he refused to immediately ban imports of Russian crude and oil products. Germany is among the countries most dependent on Russian fuel, and is instead looking to phase out imports.

“Some steps were taken too late. The sanctions may not have been enough to stop the war,” the Ukrainian leader told the Bundestag.

The address on Thursday was part of a series of speeches Zelenskyy has delivered to legislative bodies around the world. He received a standing ovation from members of Congress on Wednesday, becoming the first foreign Jewish leader not from Israel to address a joint session of Congress. He is expected to speak to Israeli lawmakers via Zoom on Sunday. The speech has been delayed because the Knesset is in recess and its building is undergoing construction.