In her first appearance since the Senate confirmed her to the position of special envoy to combat and monitor antisemitism, Deborah E. Lipstadt, met on Friday with a group of Jewish cadets and midshipmen in the service academy who were attending the Jewish Warrior Weekend in Atlanta. Her appearance was scheduled before her confirmation.

Lipstadt described it as “a moving experience.”

She said a young woman who was born to Ukrainian parents and is scheduled to intern at the Pentagon in the summer, came up to Lipstadt and said, “I want to grow up to be like you.”

Sen. Ron Johnson, a Republican of Wisconsin, ignored growing calls by Jewish groups to speed up the process amid rising antisemitism, and sought to foil the nomination over a tweet in which Lipstadt accused him of white supremacy for a comment he made about the Jan. 6, 2020 riots.

Up until 2020, the position – first established by Congress in 2004 to monitor global antisemitism – was filled by an expert who was appointed to head the office as part of the State Department’s office of religion and global affairs. In 2019, a group of senators introduced legislation to elevate the position to the rank of an ambassador, thus requiring Senate confirmation, to give the envoy more prominence in addressing the issue on behalf of the U.S. government.

Sen. Jacky Rosen, a Democrat from Nevada and one of the co-sponsors of the legislation that passed in 2020, maintained that the role Lipstadt will play as envoy outweighs the disadvantages of allowing it to become a political football.

“By elevating this post, we are sending a clear message to the world that combating antisemitism is a foreign policy priority for the United States,” Rosen said in a recent interview.

Rosen, who serves as co-chair of the Senate Bipartisan Task Force for Combating Antisemitism, said she played an instrumental role “every step of the way” – from passing the legislation, doubling funding for the office to vetting potential candidates for the position. She also said she actively worked behind the scenes with senior Republican members of the Senate Foreign Relations Committee to advance Lipstadt’s confirmation. “We are just trying to work in every area we can and be a partner with the administration, whatever administration it is, to combat antisemitism wherever is rears its ugly head,” she said. “This is not a partisan issue.” 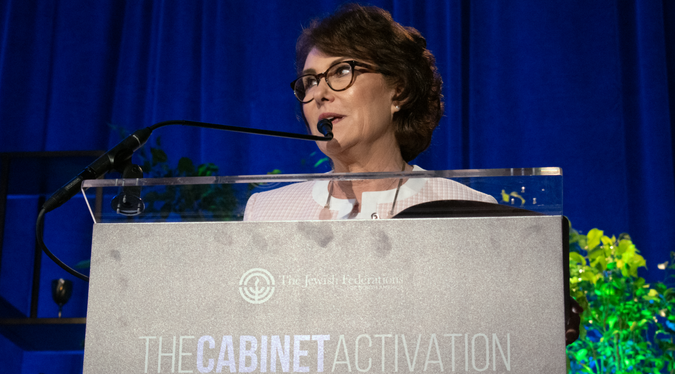 Asked about Johnson’s holdup, Rosen said, “I don’t want to dwell on the past.”

Looking ahead, Rosen said she is setting up meetings between Lipstadt and members of Congress, as well as introducing her to lawmakers abroad. Rosen is the global chairwoman of the International Council of Jewish Parliamentarians, an initiative of the World Jewish Congress founded in 2002.

Lipstadt is stepping into the role with more name recognition and credibility than her predecessors.

Lipstadt, who is on leave from Emory University in Atlanta, is one of the world’s most respected historians of the Holocaust, and one of its best known, because of the 2016 film “Denial” that chronicled her successful legal battle against a Holocaust denier who sued her for defamation. She is the author of numerous books, including “Denying the Holocaust: The Growing Assault on Truth and Memory,” “The Eichmann Trial,” and “Antisemitism: Here and Now,” which won a National Jewish Book Award in 2019.