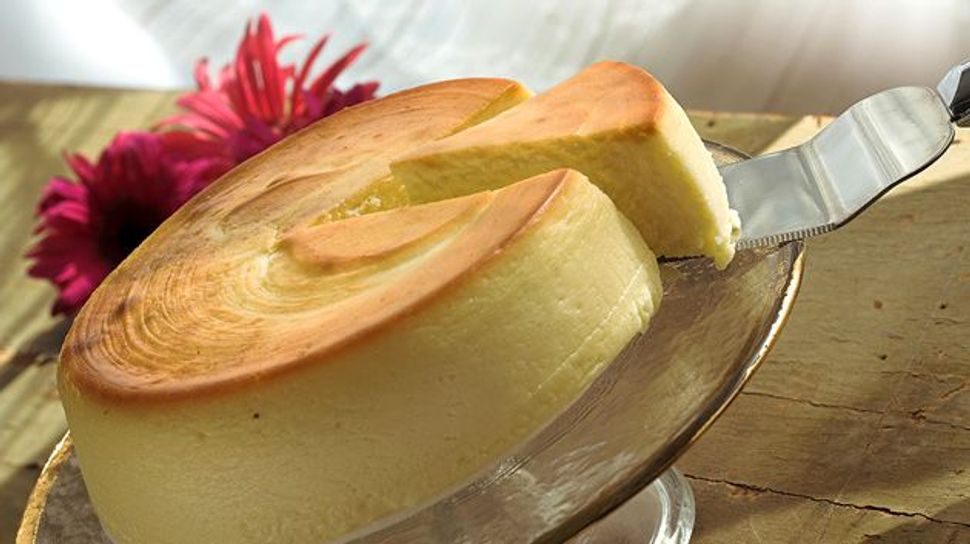 A Slice: How cheesecake became a Jewish holiday tradition. Image by ISTOCKPHOTO

The history of cheesecake is a bit sticky — everyone wants a slice. Some variation of the cake has been around for about 2,800 years and is served across Europe, in the United States and Canada, and in several countries in the Middle East. A version with pineapples is even made in Hawaii, more than 8,000 miles from the cake’s birthplace. The recipe has been adopted by numerous Jewish communities as a food for Shavuot, the holiday that originally celebrated the spring harvest and later became associated with the giving of the Torah at Mount Sinai. But how did this come to be?

First, we must say, not all cheesecakes are created equally. The cake exists in a number of forms, including sweet, savory, custard, mousse and even pancakelike, and is made from myriad soft cheeses, including ricotta, mascarpone, pot cheese, farmer’s cheese and cream cheese, to name only a few. Recipes have evolved with local ingredients and with modern technology like refrigeration. Were the early forms of cheesecake served today at the famed New York cheesecake spot Lindy’s, customers would not recognize it.

The history of cheesecake takes the form of a Jewish argument — many opinions, little consensus — in large part, because the definition of a cheesecake is so hard to pin down.

John Segreto, author of “Cheesecake Madness” (Simon & Schuster, 1984), explains that the first cheesecake on record was created “between 800 to 700 BC in ancient Greece on the Island of Samos in the Aegean Sea.” The decadent food was fed to competitors in the first Olympic Games in 776 BCE, purportedly to fuel them with energy to compete. The treat soon became a wedding cake for the wealthy in ancient Greece, and trickled down to the common man by the time of the Roman Empire. Cheesecake, according to this lineage, spread throughout Europe under Julius Caesar’s reign.

Joan Nathan, author of the “Jewish Holiday Cookbook” (Schocken Books, 1988), states that the cake was originally created in the Middle East by placing sour cream in a bag that was hung, allowing moisture to drain from the substance so that it would dry to form a curd. It was then mixed with honey, lemon peel, egg yolks and more sour cream, and baked into a cake that was most likely quite lumpy. She cites the crusaders in the spread of this dessert, claiming they returned to Europe with the idea in the 12th and 13th centuries.

Nathan explains that cheese curd was carried to Russia by the Mongols in the 13th century and was embraced by the Jewish community there. Russian Jews used the curd to prepare cheesecake, and later they took the recipe with them when they moved to other places in Europe, and then to North America.

Jewish communities throughout the West adopted and adapted the recipe to local ingredients and tastes. Some communities even borrowed from Christian traditions, such as Italian Easter cheesecake, which is made with citrus rind and fragrant orange blossom water and is now served in Italy for Shavuot. Israelis eat a light and creamy mousselike cheesecake made with gvina livana, or white cheese. Cheesecakes in France are most often made with fresh farmer’s cheese or savory goat cheese, while Greek cheesecake recipes call for feta or for Greek yogurt.

The idea of a cheese-based cake came to America with immigrants presumably quite early on; however, the recipes for New York style cheesecake — slightly dense, moist, sweet and made with cream cheese — didn’t come about until the 1870s.

It was around this time that William Lawrence, a dairy man in upstate New York, developed modern cream cheese while trying to make a French soft cheese (oh, where the world would be without that culinary mistake!). Lawrence’s cream cheese was originally sold under the name Empire Cheese Company, which later became known as Philadelphia Brand Cream Cheese.

But how did this decadent dessert become a Jewish holiday tradition?

This question brings us to another debate: The reasons for eating dairy on Shavuot are numerous — ranging from biblical to numerical — but most of them have little or no connection to the original holiday.

The spring harvest festival coincided with an abundance of fresh dairy from animals that grazed on spring plants. The harvest was frequently celebrated with dairy not only in Judaism, but also in many other cultures and locations around the world.

This is where the connection between dairy and early Shavuot celebrations stops.

There is no shortage, however, of rabbinical explanations for why Jews celebrate Shavuot with dairy:

Explanation 1: Before receiving the Torah, the Israelites did not have laws for kashrut, so when they returned to their camp from Mount Sinai, they prepared dairy foods, as it was the Sabbath and their pots were not kosher.

Explanation 2: Har Gavnunim (Mountain of Many Peaks) is one of eight names for Mount Sinai, and it shares an etymological likeness to the word gvina, or cheese in Hebrew.

Explanation 3: “Like honey and milk [the Torah] lies under your tongue” (Song of Songs 4:11). Rabbis argue that just as milk sustains the body, Torah sustains the spiritual being of a person.

The rabbinical and historical debates about this divine food go on and are outnumbered by only one other argument about cheesecake: Which recipe to prepare?

1) In a large bowl, beat the pot cheese, sugar, eggs and yogurt until very smooth.

2) Add the sour cream and vanilla and continue to beat until smooth and creamy.

3) In a small skillet combine the raisins and honey and heat until the raisins are fully coated with the honey.

4) Fold the raisins and honey mixture into the cheese mixture.

5) Pour into a well-buttered spring form pan and bake in a preheated 400-degree oven for 30 minutes, then reduce the temperature to 325 and continue to bake for another hour.

6) Transfer to a wine rack and allow to cool completely.

7) Carefully remove the sides of the spring form pan and decorate the top of the cake with the powdered sugar.

8) Refrigerate for at least 2–3 hours before serving.

1) To make the curst, grind the nuts with 1 tablespoon of the sugar in a good processor fitted with the steel blade. Cut up the butter and add the pieces to the processor with the remaining sugar and the flour. Process, pulsing, until a ball of dough is formed.

2) Cover the dough with plastic wrap and refrigerate for 30 minutes.

3) Preheat the oven to 350 degrees and press the dough onto the bottom of a greased 10-inch spring form pan.

4) Bake the crust on the middle rack of the oven for 20–25 minutes, or until golden in color.

5) To make the filling, put the cream cheese in the bowl of an electric mixer and beat on the lowest speed for about 10 minutes, or until soft and smooth, while gradually adding the sugar and scraping the sides occasionally. This long, slow action will give the filling a silky texture.

6) Add the eggs, egg yolks, sour cream, lemon zest and juice, and vanilla; mix again on the lowest speed for a few minutes, scraping the sides and beat frequently. Then gradually add the flour.

7) Scoop the cream cheese mixture onto the prepared crust. Place a pan of water in the oven on the lowest rack. Turn the oven down to 325 degrees and bake the cheesecake on the middle rack for 1 ¼ – 1 ½ hours.

8) Remove the cheesecake from the oven and let it cool for 10–15 minutes. Do not turn off the oven.

9) Put the sour cream, vanilla, and sugar in a bowl and mix well. Spoon the mixture evenly over the top of the slightly cooled cheesecake.

10) Return the cheesecake to the oven for 10 minutes. After baking it, let it cool, remove the sides of the spring form and transfer it to a serving plate.

Devra Ferst is a food writer and cooking teacher living in New York.