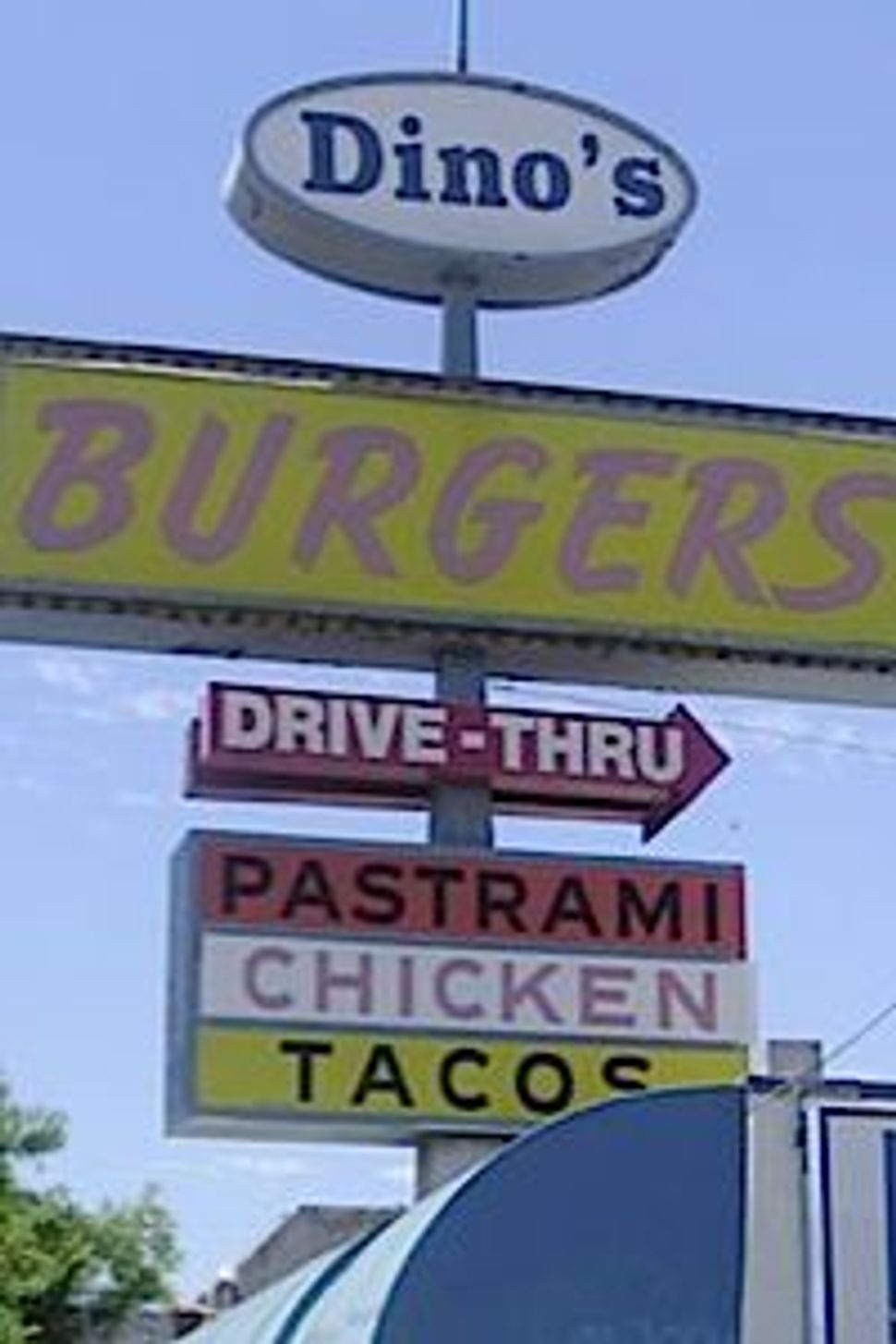 I don’t just mean the famous delis like Langer’s and Canter’s. In Los Angeles, pastrami is often removed from a Jewish context. On the Eastside, in Latino neighborhoods like Lincoln Heights, pastrami is so commonly offered alongside burritos and tacos, the deli meat almost seems Mexican.

So then how did pastrami come to be associated with Mexican food? Perhaps these burrito stands or drive-thrus had once been staffed by Jews? Or had pastrami, like polka, been brought to Mexico by emigrants from Eastern and Central Europe?

With these burning questions in mind, I went to see George Pantazis, the genial owner of Dino’s, a popular drive-thru in Lincoln Heights.

“I don’t know what you mean by ‘Mexican pastrami,’” Pantazis said. “Ours is made the usual way. We do add some special spices, but nothing that you could say was Mexican. Well, we do serve it with chilis, people like to sprinkle the meat with the juice.”

Okay, but how did this Jewish method of preserving beef end up in a Mexican neighborhood? “That’s a good question,” Pantazis said. “I’ve been here since 1968… I used to wonder if pastrami was related to pustrama, a kind of dried meat you get at Arab markets. But that doesn’t answer your question. Anyway, have a sandwich.”

Who was I to say no? At Dino’s, the pastrami is served on long white rolls that are dipped in a kind of pastrami au jus. I thought I might miss the rye bread, but the soft roll was easier on the mouth. The meat itself was pretty darn good: tender, tangy, and thinly sliced. And it was a nice change to try a bite with the chili juice. Maybe Eastside pastrami wasn’t the sublime experience of Langer’s or Katz’s. Nevertheless, the half that I intended to save for my pregnant wife ended up in my belly instead.

I left Dino’s with a satisfied stomach but an unsatisfied mind. So I thought I’d take the Philologos route and check the word’s derivation in the Oxford English Dictionary. Apparently pastram is Romanian for “pressed and preserved meat.” But echoes of the word can also be heard in badirma, Ottoman-Era Turkish for a kind of cured meat, so pastrami likely did not originate with the Ashkenazi Jews of Central Europe, but along the Western rim of the Black Sea.

Which was interesting and all, but how pastrami had come to be served alongside burritos — and sometimes in them? Finally I found a good guess by searching food critic Jonathan Gold’s columns for L.A. Weekly (although referring to Gold as a mere critic is sort of like referring to Nelson Mandela as an activist). Gold claims that Eastside pastrami is an “atavistic souvenir of the decades when Chicanos and Jews both lived along Brooklyn Avenue in Boyle Heights” — which is maybe a mile from Lincoln Heights.

So mystery solved. And it’s good to know that although Jews may not have invented pastrami, we did help it disseminate its joys. Now if someone can tell me how it became popular in South Central neighborhoods like Compton.