Not Your Bubbe’s Bacon 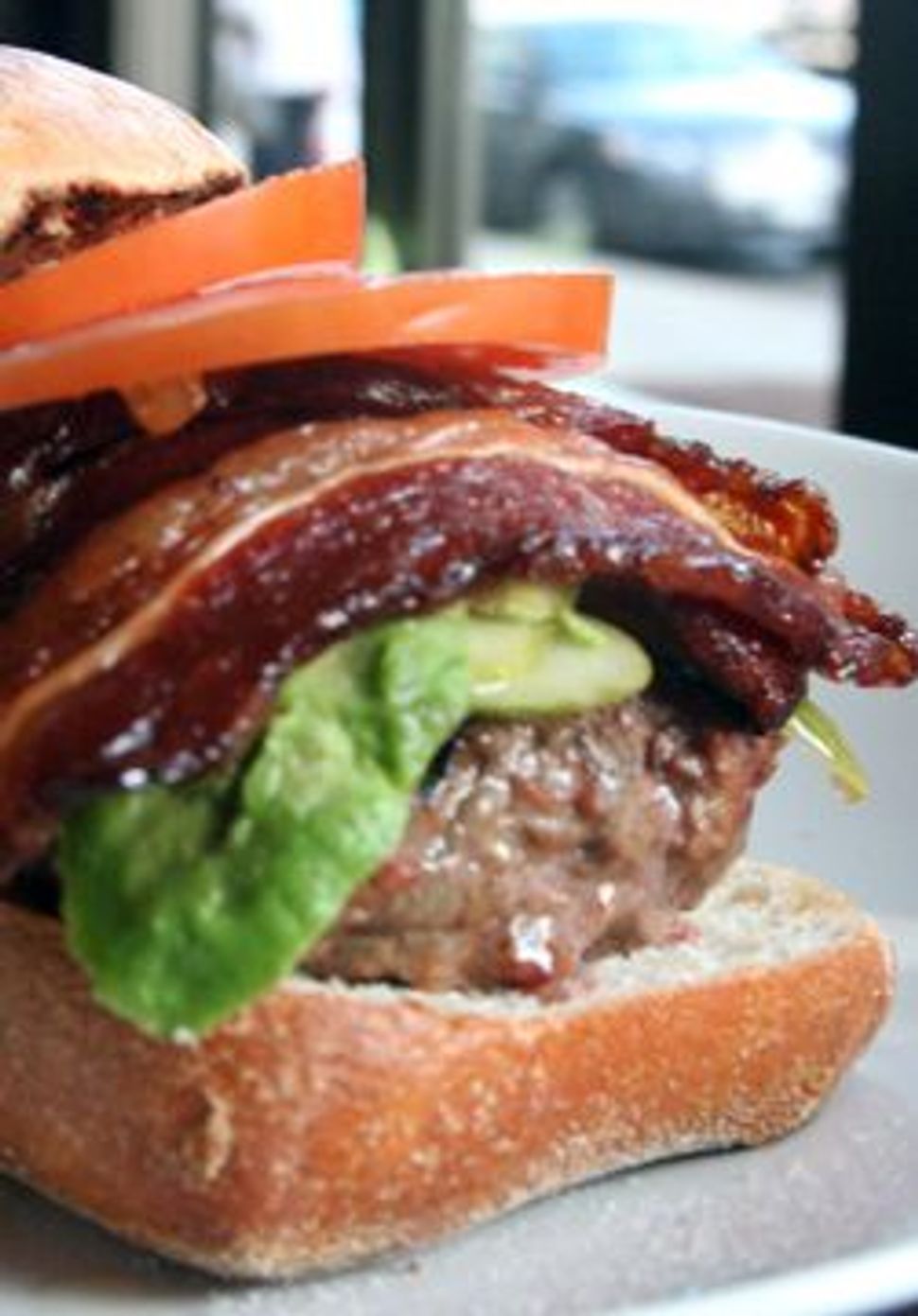 As a resident of Brooklyn, it is almost impossible to ignore the presence of bacon. Walking through different neighborhoods you cannot escape the smell of it. The food has become so popular to even warrant a “bacon flight” (a sample of several types of bacon with accompanying whiskeys) at one bar. But what of the Kosher foodie? How is it possible to feel left out of food in the city that boasts the most kosher restaurants in the country?

Chef Moses Wendel, of the new Pardes Restaurant, may be the first kosher chef in the borough to make his own in house bacon – out of beef. “Beef fry,” as he calls it, is the ingredient that completes the Pardes Burger, one of the house’s signature dishes. Served on a sourdough roll (baked specially for the restaurant) with 12oz of ground chuck (often organic), it is accompanied by house-made pickles, red wine ketchup and truffle mayo. Each mouthful is juicy, crispy and toothsome. It is the quintessential Brooklyn burger – all its ingredients are made either in-house or locally…with love, and with bacon.

“It’s delicious. It’s smoky, salty, and there’s a lot of richness to it. There are very few savory dishes that won’t be improved by adding bacon,” Chef Wendel explains. “I wasn’t always like this” he says pointing to his beard and yarmulke — referring to the fact that he used to eat pork bacon.

But what do the customers think? I ask. He breaks into a grin. “They love it! They want extra!” Doesn’t it make them a little nervous? “At Mosaic [Wendel’s previous restaurant] I used to serve lamb bacon and eggs. It looked and seemed real. That sort of freaked people out.”

Across the country, in Silicon Valley, Kitchen Table — another innovative modern kosher restaurant — serves their house burger with lamb bacon. [Heshy Fried], of the website Frumsatire, who works at Kitchen Table as a kosher supervisor and cook says, “Bacon is about more than just the food. It means something more. If a Jew wants to be funny and tell you that they’re not Orthodox, they say, ‘I eat bacon!’”

Pigs are singled out in Jewish writings beyond other non-kosher animals. It is the only non-kosher animal known to display one of the two signs of a kosher animal — it has split hoofs, but does not chew its cud. Thus, pigs suggests trickiness or duplicity, almost saying, “You think you can eat me? Ha, no you can’t!”

As an Orthodox Jew, I am excited that I can finally eat bacon. The history of Jewish people desiring what is not allowed is not a new thing. Perhaps so, but Pardes Restaurant certainly makes it a little easier in the city of New York to get around that.

I asked Chef Wendel how to make bacon. Here’s what he said:

“There’s a difference between lamb and beef bacon. It’s the same process, but different taste. Lamb is very gamey. Beef and pork are a little blander. That’s why I make my bacon with beef—beef can imitate the taste of pork better than lamb.”

1) Take short ribs or navels (navels are preferable.) Brine them for about a week with a mix of spices such as chillies, cloves, coriander and black pepper.

3) Coat with a mixture of chillies, molasses and garlic.

5) When cooled, smoke over woodchips, maybe two or three times to get a good, smoky flavour.

10) Soak it in the molasses/chilli mixture.

12) Finally, bake the meat once more.

Itta Werdiger-Roth is a kosher personal chef who operates out of New York City. She is a carnivore with a special interest in vegetarian food and enjoys cooking with locally grown, organic, and fresh ingredients. She lives in Brooklyn with her husband and daughters.

Not Your Bubbe’s Bacon