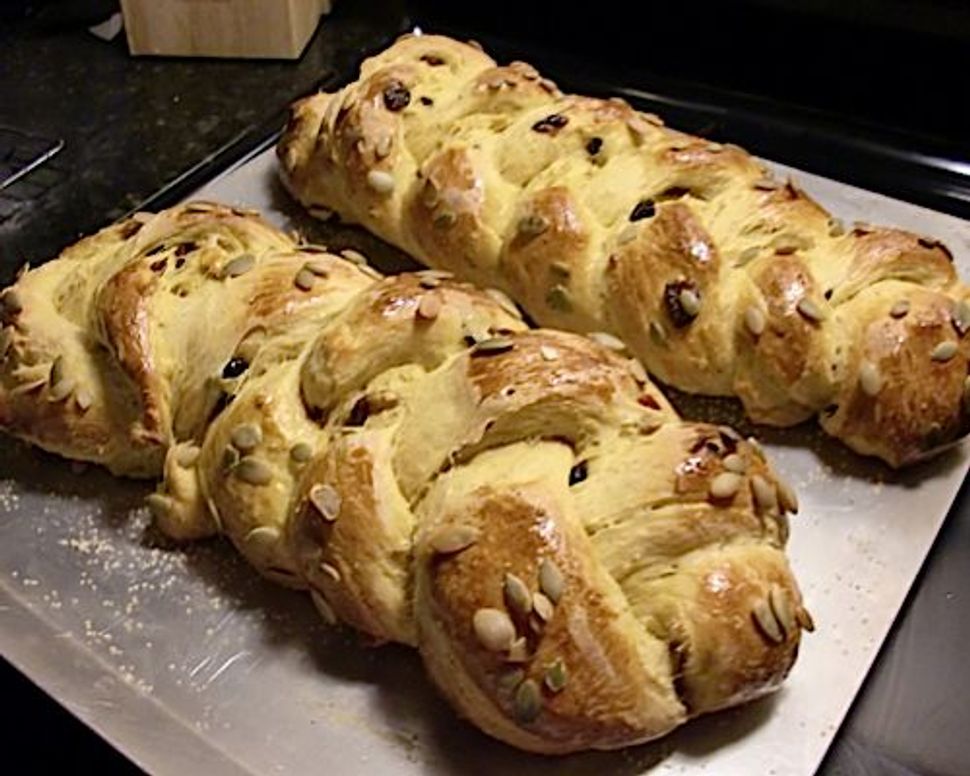 Thanksgiving weekend is arguably the ultimate time for Jewish food-lovers. With lots of family around to cook for, no need to shop for Christmas and several days off, there are hours and hours of open time to sip tea (or wine) at home and leisurely cook, filling your house with sweet and sumptuous smells of autumn food.

And while some recipes can be thrown together at the last moment, or be made in advance, others are best when we have several hours to savor their elaborate steps in the kitchen. Among those are breads, which require attention and kneading at several points throughout the day, but don’t necessitate an entire day spent on your feet cooking.

The flavors of Thanksgiving — pumpkin, cranberry and cinnamon — truly celebrate the bounty of the season and deserve more than the one-day attention they often get. With lots of time to cook Shabbos dinner the day after Thanksgiving, the flavors can easily be echoed in a festive pumpkin-cranberry challah. Spiced with cinnamon and nutmeg and topped with pumpkin seeds, this bread will fill your house with the aroma and taste of Thanksgiving for another day.

Adapted from Leah Koenig’s interpretation of Maggie Glezer’s pumpkin challah recipe from her book “A Blessing of Bread.”

2) Make the starter: Mix 1 cup of the flour with the yeast and water. Combine until it is sticky and entirely incorporated. Cover tightly with saran wrap or a damp cloth, placed directly on top of the dough. Let sit for 45 minutes.

3) In a separate bowl mix the egg and oil, then add the honey, pumpkin, salt and spices.

4) After 45 minutes of rest, combine the starter with the wet ingredients.

5) Add the craisins and gradually add the remaining flour, mixing as you go along. When the bread forms a non-sticky ball that you can knead, stop adding flour (you may need all of it, you may need less or more. Trust your hands and eyes.)

6) Knead the bread for approximately 5-10 minutes.

7) Place the dough in a bowl covered lightly with oil, cover the bread with saran wrap or a moist towel and let rest for 2-3 hours.

8) Punch down the dough and knead it a bit more. Divide it into six even sections. Roll each section into a long log, then, braid into two separate challahs.

9) Place the challahs on a parchment paper lined baking tray. Cover again and let the loaves rest for 40 minutes.

10) Brush the egg yolk on the bread and cover with pumpkin seems.