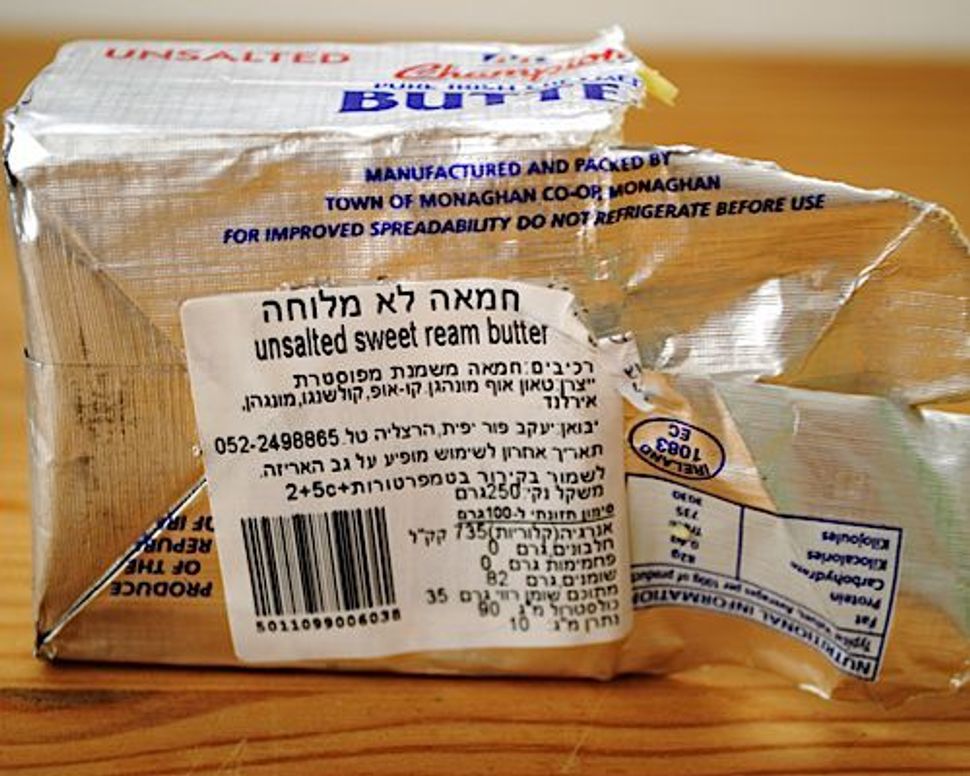 Around October people in Israel started to notice that the usual 227-gram blocks of butter were becoming more difficult to come by. By November, even the smaller, marked up 100-gram packs were scarce. And before the start of December, supermarket shelves were wiped clean of butter, meagerly offering margarine and other whipped oil products as replacements.

Israel is in the midst of the worst butter shortage in the country’s brief history. We’re talking more serious than the period of rations known as the Tzena, or “the Austerity,” immediately following the declaration of independence. So why is a trip to the grocery store suddenly reminiscent of the 1950s? A combination of increased demand, global warming, kashrut dietary restrictions, and protective tariffs are behind the scarcity.

To start, a demand for dairy products in Israel has unexpectedly risen by 3-5% in the past year, when previously consumption had been going down. Add onto that global climate change marked by an unseasonably warm fall (with temperatures as high as 96°F in the south during October). Cows produce far less milk in the heat and Israeli dairy farmers usually rely heavily on cool autumns and winters to build up a surplus to last through the year. When dairy is short, it is used for staples like milk and cream rather than butter, which is labor intensive to make and not as essential (although I would beg to differ).

At first, small groceries in Tel Aviv were hiding butter for regulars or rationing butter to two packs per customer (now they’ve mostly run out). When allowed, people have been seen buying as much butter as possible and hoarding it. I’ll admit that in moments of desperation I’ve even taken home butter packets from cafes; they have come in handy. Also, lucky for me, I’ve got a guy. I’m not sure how this one vendor at the shuk in Be’er Sheva maintains a supply of butter (and at only a two shekel, or 50 cent, mark-up) when the major supermarket chains are at a loss, but I don’t ask too many questions.

Not everyone has suffered from the butter shortage. Etai Spivak, owner of the popular Dining Hall restaurant in Tel Aviv reports: “Since we rely very little on butter and use mainly olive oil we were hardly affected.” Indeed, since the Israeli diet is decidedly Mediterranean, the butter shortage hasn’t created the same national crisis it might in, say, France. Additionally, since parve baked goods are part of the norm in Israel, many are used to baking sans butter.

While some people are content to lead a butter-free existence, the rest of us have been waiting feverishly for the Israeli government to take action. Increasing the amount of imported butter would appear to be a simple solution, but in Israel this is complicated. The Finance Ministry has major tariffs in place to protect the local dairy industry, so imported dairy is taxed an additional 140-160%, and is limited to about 550 tons in a market of 9,000 tons of production. In addition, since dairy in Israel is under close rabbinical supervision, importing products requires additional steps to ensure its adherence to kashrut.

In response to the dire situation, however, the Israeli Finance Ministry finally removed the import tax on butter. The tariff will remain lifted only until January, 2011, hopefully just long enough to get Israel’s butter business back on track. Moreover, to help meet demand, the Agriculture Ministry has agreed to allow 12 new dairy farms to be built.

Butter hasn’t been the only victim of Israel’s particularly hot year. Tomato and potato prices have skyrocketed and the country was even threatened with a hummus shortage because of a dearth of legumes (talk about a potential national crisis). Taxes on imported tomatoes and potatoes have also been canceled until the end of the year to reduce the shortage and lower prices.

Slowly, butter is returning to store shelves. Irish and Dutch butter have been spotted at select supermarkets for more than double the cost of its Israeli equivalent (upwards of $5 per cup instead of the standard $2 or so). It comes slapped with an extra sticker in Hebrew, sometimes verifying that it has been approved by a rabbi. Today I came across big blocks of butter, wrapped simply in unlabeled parchment, at a Russian, non-kosher market near my house. I stocked up.