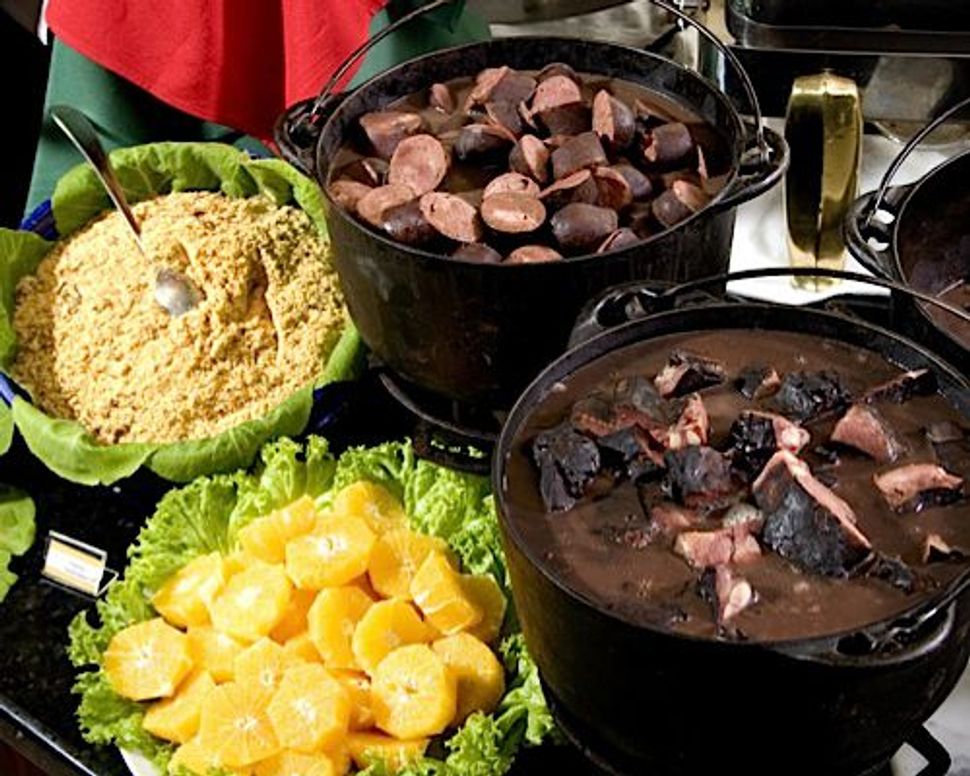 Ben Havumaki, a friend who is traveling through Southeast Asia emailed me recently from Thailand, “I’m fresh back from a meal at the Chabad House in Chiang Mai. I ate…………..Schnitzel! It was paired with ‘Wok Stirred Vegetables.’”

Whether or not the sound of that combination makes your mouth water, a meal of that nature – Ashkenazic or Israeli food made with a dash of local flavor, is characteristic of what is served at Chabad Centers the world over.

Chabad centers are in seemingly every corner of the globe (there are 3,300 centers in 75 countries), from The Democratic Republic of Congo, to Casablanca to Sao Paolo. While the long beards of the men and standard black and white attire of the shluchim, or emissaries, who run the centers, may stand out in some of the more exotic locations, the centers work hard to create a welcoming atmosphere for locals and travelers alike, sometimes using their menus to do so.

In Sao Paolo, Brazil, Eli Malowany, 20, son of the shluchim there, told me about their kosher version of feijoada, an iconic Brazilian stew made of beans, beef and several types of pork. In their rendition, the pork is replaced with various meats, from brisket to hot dogs. The availability of kosher meat in Brazil makes creating a kosher version of the dish relatively easy.

But, Brazilian dishes aren’t on the menu every shabbat lunch (which is typically served to 80-100 guests). The Malowanys change the theme each week, sometimes offering Italian food, sometimes Chinese and beyond, depending on the mood. This global buffet has an important role in their mission to encourage kosher observance among their guests. Malowany explained, “No matter which kosher food you want to eat – Brazilian, Mexican, etcetera, you can find it and it will be just as delicious as non-kosher food.”

Rabbi Shlomo Bentolila, who runs the Chabad House in The Democatic Republic of Congo generally serves what he considers “universal Jewish food” at his Shabbat table. However, one local item, African hot sauce, known as pili-pili, is a staple on the table. Made of hot red chili peppers, lemon, garlic, oil and salt, it highlights the locally grown hot peppers.

Rabbi Levi in Casablanca regularly serves Moroccan food. He says, “For shabbos we usually serve a typical Moroccan meal including Moroccan cooked salads, Moroccan fish, dafina [Moroccan cholent], etcetera. We usually host locals and we like them to feel comfortable. It is the food that people in this country enjoy.”

And of course, there are the wok stirred vegetables in Thailand.

But, for many travelers, it’s the standard “Jewish fare” and not the local flavors that stand out in their memories. Gena Bofshever of New York recounted her time at Chabad Venice during a backpacking trip through Europe, “The thing that’s most coming to my head is chicken soup, challah and I want to say… cold cuts?” she recounted. Josh Luckens of Boston gave an account of his travels in South America, “I went to Jabad de Cusco Peru on the Sabbath Eve. The food was horrible, typical greasy chicken and overcooked veggies that you’d get in the States. Nothing Peruvian about it.”

Ben Sales, the editor of New Voices, who has eaten in Chabad houses in Bologna, Florence, Hamburg, Barcelona and Romania recalled, “I do remember that no matter where they were, the Chabads tended to serve traditional Ashkenazic dishes.” He conceded, however, “each Chabad also served some local cultural staples, like salsa in Barcelona or pasta in Florence.” Havumaki echoed the sentiments when recalling his meals at Chabad in Thailand: “While there were a few ‘Asian’ selections on offer, the bulk of the menu consisted of familiar Ashkenazi and Israeli dishes.”

Havumaki points to the large population of Israelis at Chabad Chiang Mai as a reason for this, “This Chabad House seems to cater to an almost exclusively Israeli crowd – many of the signs were only in Hebrew,” he explains. With the bulk of Israelis spending months abroad following army service or university, Chabad Houses are often havens and gathering places for Israelis in search of comfort food and familiar sights and sounds.

The shluchim, the travelers, the locals and the availability of kosher food are all variables that influence what will be served at the Shabbat and daily table. In the words of Malowany from Brazil, “No matter where you are in the world, Chabad is always there.” And indeed, so is their shnitzel (perhaps served with some pili-pili sauce).