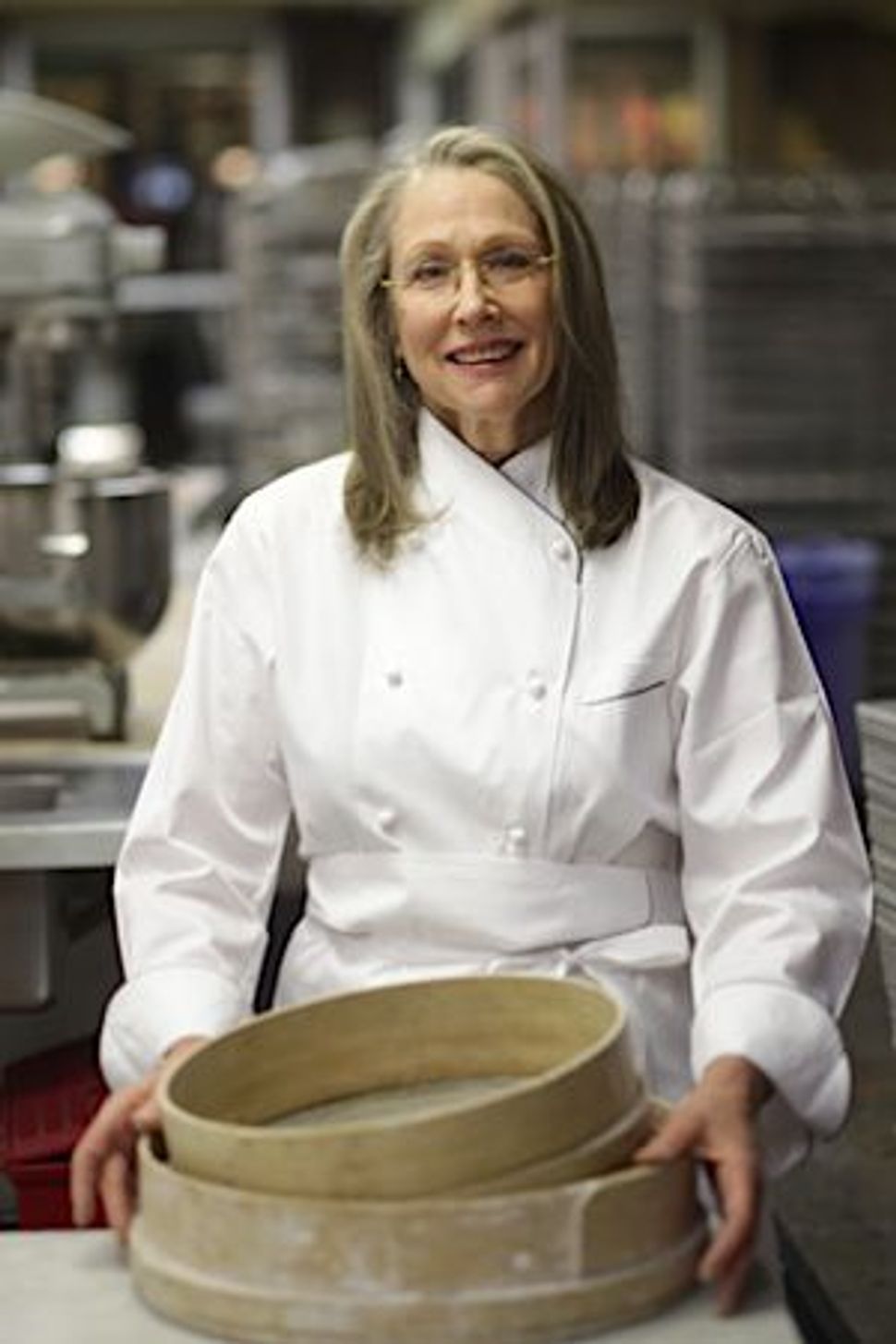 Baking is caught somewhere between a science and an art. Chemical reactions take place at the same time as layers of cake are artfully constructed or sugar is exquisitely pulled and colored. Mastering both the art and the science takes endless hours of practice or unfailingly good guidance. It is just this type of guidance that Sarabeth Levine, the owner of Sarabeth’s restaurants and jam maker, shares with home bakers in her new book “Sarabeth’s Bakery, From My Hands to Yours.”

Her career started with a secret family recipe for Orange-Apricot Marmalade, which she served at her husband’s café and grew from there. For the past 30 years she has been baking breakfast treats and whipping up silken eggs at her restaurants, which helped revolutionize the city’s brunch scene.

Drizzled throughout her book are recipes for a several traditional Jewish baked goods. Her rugelach, which former New York Times Dining columnist Mimi Sheraton calls “the best rugelach in New York and the best I have ever had this side of my grandmother’s kitchen,” are rich with cream cheese and crisp on top. Her babka is a riff on a traditional recipe, made with a breakfast Danish dough.

She talked with us about the roots of her recipes, being a self-taught baker and just how important technique (and flour selection) is in baking. She also shares with us her rugelach and babka recipes.

Devra Ferst: You own seven restaurants, a bakery, a jam factory and just put out a cookbook. How did it all get started?

Sarabeth Levine: I’ve always loved to eat and loved food. I grew up in a family where we had very simple food…My mother had maybe 10 dishes like her stuffed cabbage and her noodle pudding.

When I met my first husband, his mother was an amazing cook and that’s where I really learned to begin to cook… a lot of ethnic cooking and a lot of baking from Hungary. I learned from her and then the marmalade happened.

You were one of the major forces behind the development of New York City brunch. How has brunch changed?

Thirty years ago, brunch was a nothing. No one was making breakfast. You went to the diner on the corner and your eggs were cooked on the griddle. I love breakfast so it was natural for me to start making breakfast in the bakery where I was making jam and I put up three little tables.

The hotels were doing nice breakfast, but there wasn’t any place to go. I want to say I began brunch in New York or I brought notice to it. I made that an important meal.

There are several Jewish recipes in your book (babka, challah, rugelach…). Do they taste like the recipes you grew up with?

Yes these are the rugelach that I remember from being a young person. The rugelach that I see in the stores today I don’t recognize… Sometimes I have a whim to make babka so one day I just grabbed some of my Danish dough, which is very rich in egg yolk and is layered and is delicious. Babka is made kind of like you would make a brioche and this has layers so I said I wonder what would happen if I make some babka with my Danish dough? [It’s] very delicious, very rich.

So often rugelach at supermarkets or even bakeries are dry. How do you avoid that dryness?

Oh they’re awful. Sometimes from over baking or not using the right amount of jam in it causes that. My recipe has cream cheese in it and butter, equal portions. Ours are really how a rugelach originally was — a cookie.

Do you have favorite Jewish foods?

I love my mother’s stuffed cabbage. When I go to a Jewish delicatessen, it’s very hard for me to pass up a hot pastrami sandwich with the mustard — with the right pickle!

Now today I don’t go out for Jewish food or cook it much. In my first marriage I kept kosher. That’s the food of my first 25-30 years of my life and then food started to change for me.

What did it become?

It was like the windows opened and there was food — more food. Like, wow, combinations. I’m still very classical in what I eat. I mean bacon ice cream — come on, we get it, what is that? You see my baking — it’s classic.

Where did the recipe in your restaurants and in the book come from?

People would come in the early years, in the middle years and stay for a while, people with a lot of experience. They were culinary school graduates, people from France… so what happens is that you share. If you work here, whatever you create here, we make them here. When you leave, it’s what you’ve passed on to us and it’s a nice thing and what you’ve learned from us, you take with you. When you like to bake, you like to share.

You can have a recipe but if you don’t have any technique — forget about it! It’s all about the technique. There are a lot of great recipes.

One of the things you’re known for is the perfectly light silk-like egg, do you have a special technique for that?

There’s a secret to that. What I discovered from baking is if I mixed [the eggs] with a mixer when I was baking — it would totally break down the eggs. I said ‘what would happen if I beat my eggs with a mixer and strain them (you strain eggs sometimes in baking)?’ I applied that to the eggs and the next thing you knew — I had these smooth beautiful eggs. Light and fluffy. No milk — that’s a false fluff.

There’s such a new interest in flour — what kinds do you use?

Different flour achieves different results. If I give you recipes I have to tell you what kind of flour. And I do in the book. I like King Arthur flour. I used unbleached all-purpose flour, unbleached bread flour, I use pastry flour.

So besides your new blog (Goddess of Bakedom), what are some of your new projects?

Another book is on the horizon, a breakfast and brunch book in about two years. And we have a new restaurant opening this spring (before mother’s day) down in Tribeca. A nice big one — 240 seats.