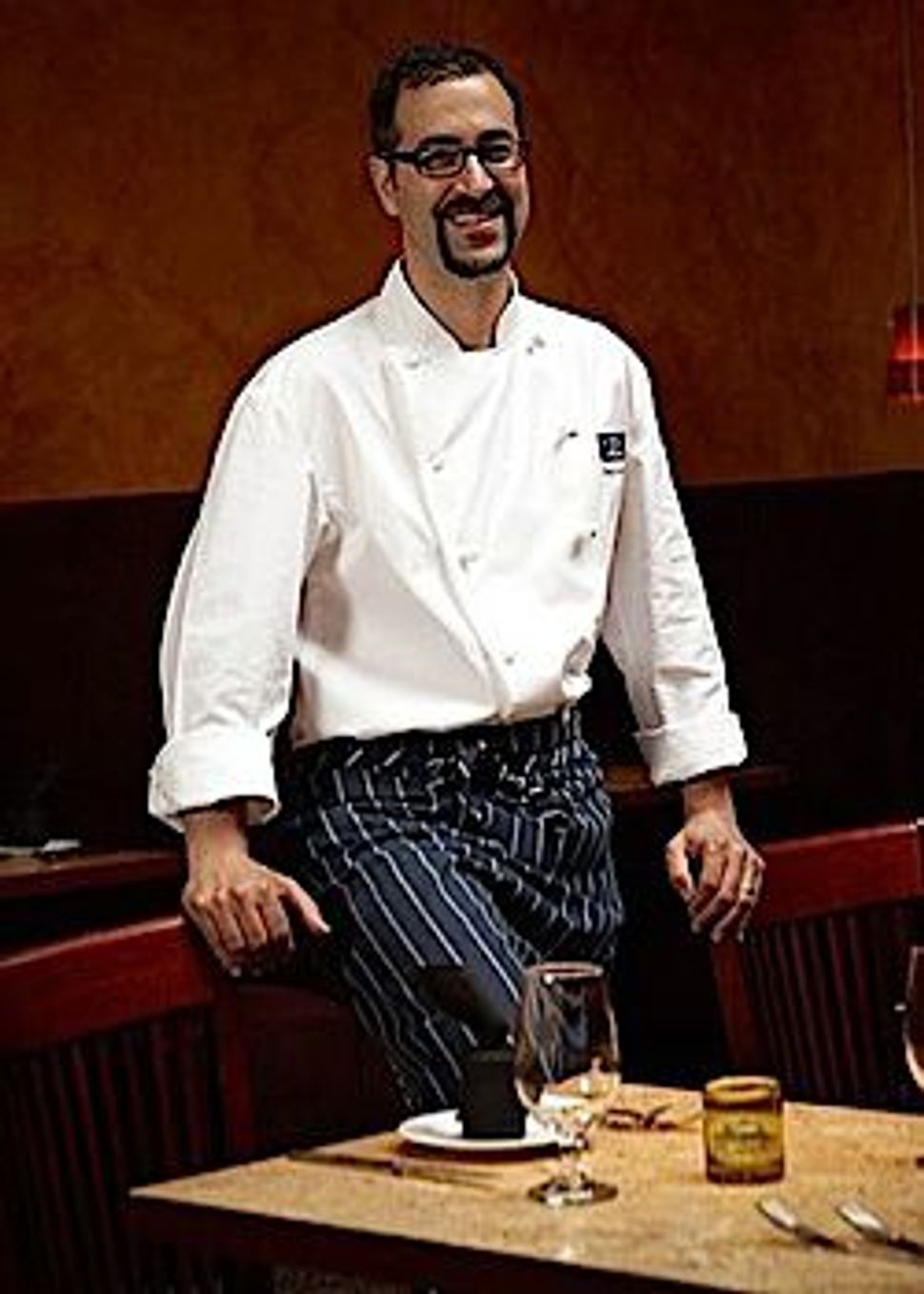 In our new series, Chosen Chefs, we will profile up-and-coming Jewish chefs making waves from Los Angeles to New York. And in case you can’t get there, we’ll include a recipe from each of the chefs that you can make at home. These are members of the tribe who you’ll want to keep on your radar. If we were the betting type, we might see some James Beard Awards in their future.

These days, chefs are revered, and they garner so much press attention that they’re often described as the new rock stars. In Barry Koslow’s case, the comparison is even more fitting. Koslow, executive chef of Arlington, Va.’s sophisticated American Tallula restaurant and adjoining gastropub, EatBar, was a guitarist in a rock band before turning his attention to food.

Now, Koslow garners accolades for his elegant American cooking with a French twist. One of his signature dishes at Tallula — which has never come off the menu — is a house-made cavatelli with veal sausage, escarole and chili flakes. “I have a few addicts that come in for that fairly often,” he said. At the wine-driven EatBar, his food is more casual and includes pub fare, like a fancy burger.

His Jewish roots pop up in a surprising number of dishes throughout his menus. A mainstay at both of his restaurants is a house brined and smoked pastrami, which he serves as a slider at EatBar and as a hash at Tallula. He also serves a lox-style terrine, which layers smoked salmon and horseradish and combines his classic French training and Jewish sensibilities. And just few weeks ago, he made a special tasting menu of tongue.

Some of his most vivid food memories from childhood involve his grandmother’s chicken soup, which he has re-created at Tallula. “I made a traditional matzo ball soup right before Passover, with pulled chicken and diced mirepoix [a combination of carrots, onion and celery]. The whole trick is making the lightest, fluffiest matzo balls,” he said. “The first time I made it I got yelled at by my mom, who said I didn’t make it right. She always said water had to be at rapid boil and you basically had to duct tape the top of the pot so that no steam escaped when the matzo balls boiled. But I think it’s all in the handling. I always say use your finger tips, not your palms.”

He must have done something right, because now he’s in charge of making the family chicken soup each Passover.

Koslow, 41, grew up locally, just outside Washington, D.C. He was raised in a traditional Jewish home, where he went to Sunday school, was bar-mitzvahed and attended synagogue on the High Holy Days.

And despite his mother’s fervor for a well-made matzo ball, he fell into cooking relatively late in life — attending Maryland’s small, French culinary school L’Academie de Cuisine at 30. While living in North Carolina, working as a guitarist, he, like, many other musicians, began waiting tables. “I started working in better and better restaurants, and I started to feel comfortable in them. I was with people who lived my kind of lifestyle. It felt like it was a band of pirates in every new restaurant,” he said.

Koslow’s roommate also happened to be the sous chef at Magnolia, a James Beard-winning restaurant. “Living with him was very eye-opening,” he said. He had cookbooks, magazines, and was always pickling stuff. I learned a lot from him.” Koslow gave up on music, got a catering job and decided he could handle the grueling restaurant lifestyle. During culinary school he landed an externship at Todd Gray’s Equinox, in D.C.

Before heading to Tallula two years ago, he ran the kitchen at Mendocino, a 45-seat wine bar where the food was also simple and modern American.

While his go-to cuisine may be French-inflected American fare, Koslow has a soft spot for deli. But he describes D.C. as a “barren wasteland of deli.” Asked whether he’d ever want to remedy that by opening a Jewish-style deli there, he answered: “Don’t think I haven’t thought of it. But it wouldn’t be a traditional deli, more of a crazy hybrid of fine-dining techniques and the rustic, organic nature of a deli.”

He said he’s curious to see how Spike Mendelsohn’s new kosher deli truck, Sixth & Rye, fares, as an indicator of whether or not D.C. has an appetite for deli.

But unlike Sixth & Rye, Koslow’s hypothetical deli wouldn’t be kosher. “That would be a hard sell. I think you’d have to appeal to a broader range of people. A lot of non-Jews like Jewish food.”

1) In a large pot add oil to pot and bring up to 150 degrees Fahrenheit. Be sure to leave enough room that the oil doesn’t splash.

2) Season the filets of Salmon with salt and pepper

4) Try to keep the oil as close to 150 as possible using a candy thermometer or digital thermometer. Cook salmon 10 minutes or to desired doneness. Remove from the oil carefully with a slotted spatula and drain on a paper towel.

1) Peel potatoes and onion and coarsely grate with a cheese grater. Squeeze out as much water as possible from the grated vegetables and place in a mixing bowl. Add thyme, egg yolks, salt and pepper

2) Heat clarified butter in a 12-inch nonstick skillet over moderately high heat until hot but not smoking.

3) Working in batches of 4 latkes, spoon 2 tablespoons potato mixture per latke into skillet, spreading into 3-inch rounds with a fork.

5) Transfer to paper towels to drain. Add more oil to skillet as needed. Keep latkes warm on a wire rack set in a shallow baking pan in oven.

Add ingredients together in a small pot, warm on low heat but do not boil

Putting it all Together

Place the warm Latke on a plate, with the Salmon sitting on top, and a light drizzle of the warm crème fraiche around it. Garnish with caperberries, pickled red onions, or some sautéed Asparagus with garlic. Enjoy!