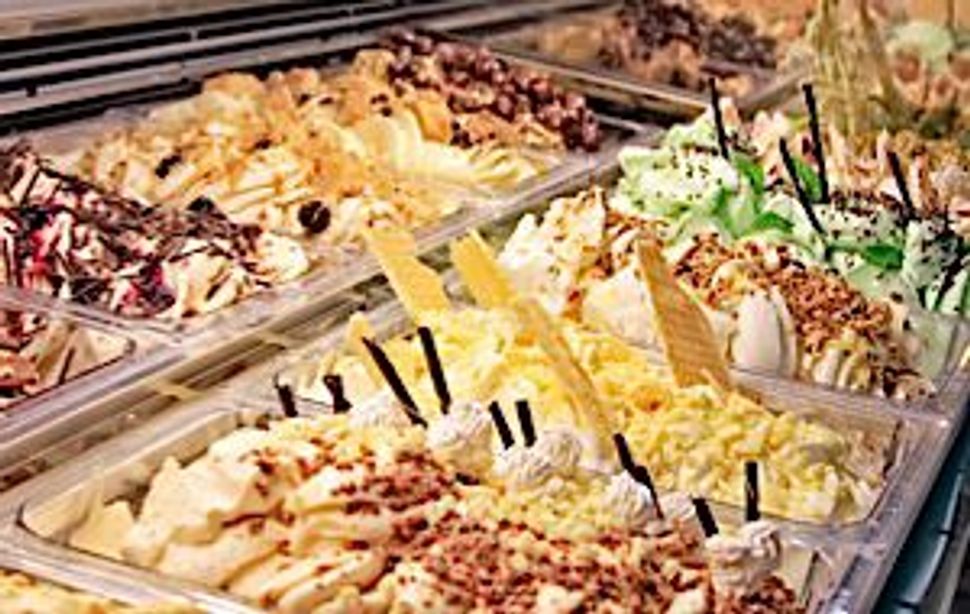 Image by Courtesy of Screme

People are fascinated with the idea of the afterlife and whether Jews believe in Heaven and Hell. Now, I’m no professional theologian, but I think that if I died and was greeted by a smiling minyan of Ben Cohen and Jerry Greenfield, Mr. Häagen and Mrs. Dasz, Joseph Edy and Moshe-Lev Dreyer, Burt Baskin and Irv Robbins, Sharon Breyer and Malky “Dairy” Queen bearing free samples that, for me, would be heaven.

Perhaps to partly compensate for classifying ketchup as a vegetable, Ronald Reagan’s gift to gastronomes was to proclaim the third Sunday in July National Ice Cream Day. As homage to Proclamation 5219 we convened a Forward think tank to test the tastes presented by two post-Reagan kosher ice cream outfits.

Due to a dearth of distribution depots it was difficult for our intrepid investigators to choose Chozen. Of their heritage-influenced flavors we were sadly unable to obtain Ronne’s Ruglach, Chocolate Babka or Apples and Honey flavors. Having sampled Matzel Toff’s excellent caramel and chocolate covered matzo in the past, we had high expectations for the Matzoh Crunch flavor but were sadly disappointed. Contrary to advertized, the slivers of unleavened bread were soggy and they lacked either a saltiness or nuttiness to give the ice cream dimension.

Our Canadian arty semite vouched for the Coconut Macaroon flavor which, he mumbled around mouthfuls, contained “a lot of coconut. Really has a lot of coconut. This has coconut!” And universal approbation came, not entirely unexpectedly, for the Chocolate Gelt flavor. Brooklyn foodster Devra Ferst noted that it tasted like “frozen hot chocolate.” Which is not as oxymoronic as it sounds, but about as tasty. Plus the Gelt had coin sized solids in it which gave it a pleasing texture.

Editor Eisner finished the Gelt flavor off with relish after having, inexplicably, refused the tangy yogurt-flavored ice cream from Israeli upstart Screme. A relative newbie on the American scene, Screme is a spinoff from Israeli ice cremeurs, Aldo. It is, presumably, trying to take advantage of Israel’s excellent reputation for dairy products — undoubtedly the result of its vast and lush meadowland upon which huge herds of happy cows graze.

Made from scratch every day, gelatos and sorbets from Screme face different challenges from Chozen tubs that can languish in freezers for weeks. Allison “YidLit” Yarrow is a popcorn maven and she was disappointed by the Popcorn flavor ice cream that she tried the day after it was purchased, whereas it was met with fairly widespread approval from the froznoscenti while it was fresh the night before.

Cookies and Screme was as sweet as advertized but it raised little interest from heavy-hitting news editor Larry Cohler-Esses who was sweet enough even before the cool treat. Biscotti Screme was also felt to be a little underwhelming although, perhaps, faithful to the flavor of the likewise underwhelming foodstuff, biscotti.

Naomi “Dasz” Zeveloff — champion of justice and soft-scoop — noted that the playing field was anything but level, trying ice creams at different temperatures and different ages. But, as the Gipper himself might have said, “Chill out, it’s ice cream month, dude.”