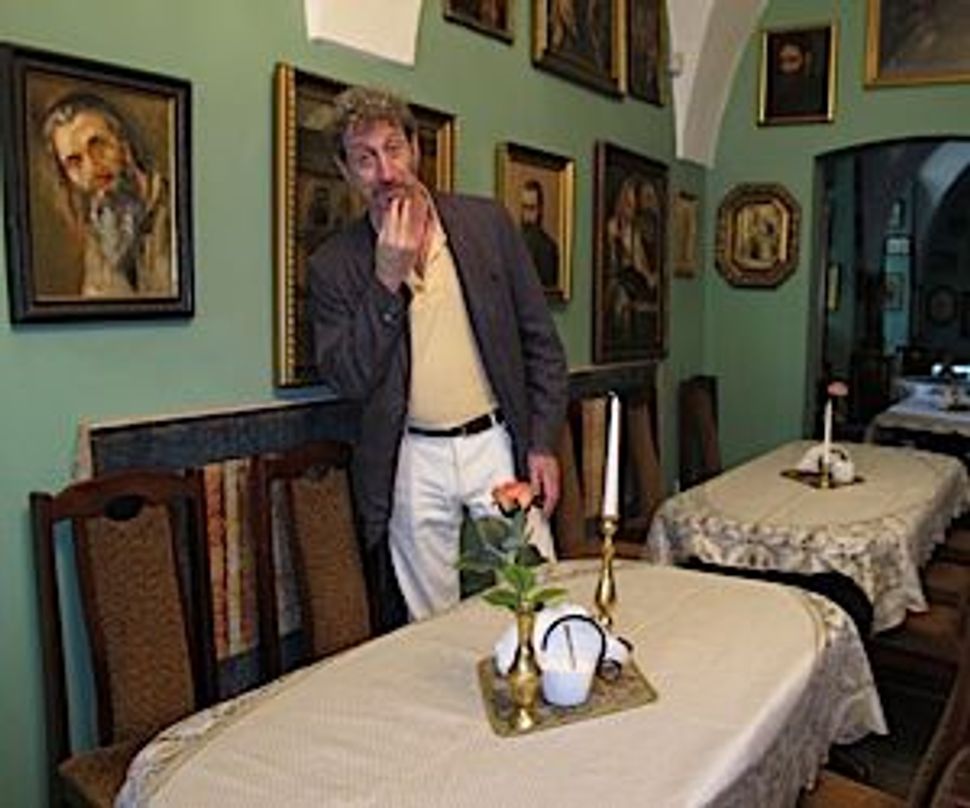 Krakow’s old Jewish quarter, Kazimierz, is famous (or notorious, depending on how you look at it) for its Jewish-themed tourist infrastructure. Its “Jewish” cafes present a nostalgic literary image of prewar Jewish life — some with taste and sensitivity, others in a disturbingly kitschy manner.

At least a dozen (and maybe more) cafes, restaurants, hotels and other establishments, which are mainly geared toward tourists, make reference to Kazimierz’s Jewish character. In general, furnishings and decor evoke a certain Old World shtetl chic with dark wood, old books, candlesticks, lace doilies, mismatched old furniture, and old (or faux-old) paintings of genre scenes and portraits of rabbis. They spell “Jewish” locally in the same way that dragons and red lanterns spell “Chinese” and that checkered table cloths with Chianti flasks signified “Italian” culture.

These venues use Jewish themes or make reference to Kazimierz’s prewar Jewish history in their name or signs, which are sometimes written in Hebrew-style letters. Their menus feature items like gefilte fish, chicken soup, stuffed goose neck and kreplach, as well as dishes described as “Jewish-style,” or with names such as “Rabbi’s Salad,” “Yankiel the Innkeeper of Berdytchov’s Soup” or “Maurycy the Tailor’s Slices of Beef.”

The trend started nearly 20 years ago, with the beginning of the touristic development of Kazimierz. The area encompasses Central Europe’s most important — and intact — complex of Jewish heritage sites, but at the time it was a rundown slum, and the first Jewish-style cafes were welcomed oases. They were often conceived as an homage to the vanished past. Since then, the district has evolved into one of Europe’s premier Jewish tourist attractions, home to the huge annual Festival of Jewish Culture, several Jewish institutions and even an active Jewish community center. An upscale kosher restaurant, The Olive Tree, opened in the area recently, serving sleek (and quite tasty) kosher dining, with an emphasis on Mediterranean cuisine.

Nowadays, visitors are still sometimes shocked by the extent of the kitsch (Szeroka Street, the main square in Jewish Kazimierz and the hub of Jewish tourism, souvenir stalls and Jewish-themed venues, is sometimes referred to as “Jewrassic Park”). But the Jewish-themed cafes are actually now in the minority — Kazimierz has become a major district of youth-oriented nightlife and music, with scores of pubs, clubs and cafes, and eateries of all sorts.

This year, during the festival, I enlisted two festival participants — Chicago-based dancer Steve Weintraub and Berlin-based trumpeter Paul Brody — to join me on a couple of “café crawls” to rate half a dozen of the most prominent Jewish-themed establishments in the district, from the ones that are over the top, to the ones that are a nice place to hang out.

A meeting place for local and visiting Jewish intellectuals and artists, K-H is run by Wojtek and Malgosia Ornat, who also operate a Jewish publishing house and bookstore. Both have Jewish roots. The Ornats’ first Jewish themed café, opened in 1992, was the first in Kazimierz, and their take on style, décor and menu has influenced many other cafes in the district and in other cities. Its front room is an intimate cafe/restaurant, but it also has larger dining rooms. Up flights of creaky stairs is a hotel with old-fashioned furnishings. In the shady garden, you can enjoy one of the best breakfasts in town — home-baked rolls, sour cherry jam, cheeses, fruit, eggs and hummus. Szeroka 6

Once Upon A Time In Kazimierz

The highly theatrical concept has always caused me to cringe a bit. The exterior of the café/restaurant is mocked up to look like a row of pre-war shops, with weathered-looking shop signs fronting the street like Benjamin Holcer’s Carpentry Shop and Chajim Cohen’s General Store. Big signs explain that the restaurant “takes us down memory lane to that bygone time.” The interior resembles an overstocked antique or curio shop crowded with items relating to the false-front shops, but it is surprisingly pleasant, achieving a sort of warm, fuzzy coziness. The menu is small but the duck with cherries comes recommended. Szeroka 1

Noah’s Ark, one of the best known Jewish cafés, opened in 1995 and was long located in a historic building with vaulted ceilings on Szeroka. It recently moved and it may be unfair to judge it yet on its new incarnation — the lace tablecloths and candlesticks are in place, live klezmer bands play at night and the restaurant is full — but everything is still so new that it’s rather soulless. Its menu still offers dishes with names like “Cheese Soup of Jealous Sarah” and “Veal in Garlic Sauce for the Klezmers.” Corner of Izaaka and Kupa streets

This pleasant little café is an offshoot of the Festival of Jewish Culture. It has a low-key atmosphere, a library of Jewish books, and it serves exotic teas and coffees, kosher wine, and Israeli snacks such as pita, cheeses, olives and sun-dried tomatoes. Cheder aims to serve as an informal Jewish cultural center and hosts book presentations, readings, concerts and other events often keyed to contemporary Jewish culture. Jozefa 36

Sara used to be a forbiddingly stark, modern café in the Jewish Culture Center located in a renovated prayer house at the edge of Plac Nowy. It has undergone redecoration to make it much more cozy, but it still eschews nostalgic kitsch. Its roof garden has a terrific view of Plac Nowy and Kazimierz rooftops, in what may be the most secluded and secret spot in the district. At the center for Jewish culture, Meisels 17

Ariel was the first Jewish-style venue to open — back in 1992 when it was run by Wojtek and Malgosia Ornat (now the owners of Klezmer Hois). Today, it is the most blatantly commercial of them all. It is a rambling establishment, catering to groups. Its facade sports a huge menorah flanked by lions and dominates Szeroka. While the outdoor seating is pleasant enough, the dozens of paintings of rabbis and other Jewish imagery that decorate its interior strike me as prime examples off-the-shelf “Jewish.” Its little shop selling carved figurines of Jews and even refrigerator magnets of Jewish heads with stereotype profiles makes me particularly uncomfortable. There’s a large menu, but the rugelach we ordered were too stale to eat. Szeroka 18