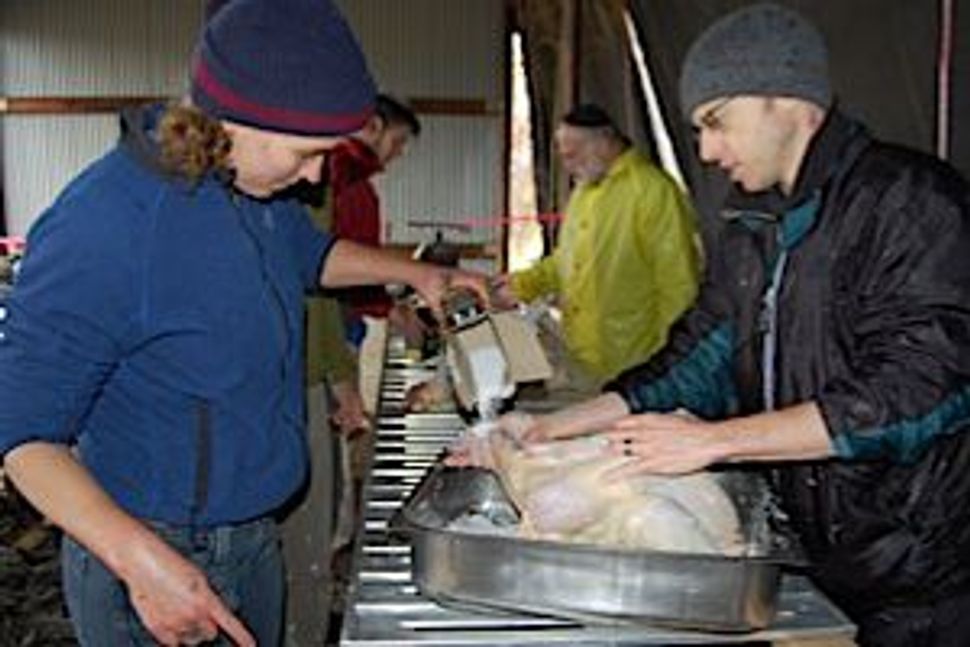 We’ve gotten our hands dirty making pickles. We’ve pounded sauerkraut like bubbes from the Lower East Side. We’ve planted herbs in havdallah gardens and we’ve learned amazing new braids for our challah, which we’ve leavened with natural sourdough. The DIY food movement has taken hold of the Jewish community — and it’s logical that after the vegetable growing and the bread baking that our thoughts turn to meat.

Ironically, though the DIY movement may be fueling interest in kosher slaughter, though, it’s not something you can read about on an urban homesteader blog and try in your backyard. The laws of shechita (kosher slaughter) are carefully guarded, and one must undergo rigorous training to become a shochet (a ritual slaughterer), at least according to orthodox standards. That said, there is still an opportunity for hands-on learning, and communities across the country have been gathering at farms and community centers to watch kosher shechita and in some cases, pluck a feather or two. The experiences are profound, and participants often have the opportunity to wrestle with important issues of meat eating, kashrut and Jewish tradition as a whole.

Back at the Hazon Food Conference in 2006, Nigel Savage, Executive Director of Hazon, said in his opening speech, “Put your hands up if you eat meat — but would not do so if you had to kill it yourself.” A number of hands went up. He then said, “Put your hands up if you’re a vegetarian — but would eat meat if you killed it yourself,” and a different group of hands went up. After this exercise, he announced that at the next Food Conference, there would be a shechitah demonstration Friday afternoon. So, in 2007, they shechteda goat; in 2008, it was turkeys; in 2009, chickens. And at this year’s Food Conference, we again offer an educational shechitah, with the goal of “lifting the cellophane veil” that keeps meat production, for the most part, a hidden mystery.

This June in Denver, CO, about twenty members of Congregation HEA along with their rabbi, went to a nearby farm to slaughter and dress fifty chickens. In his sermon about the experience, Rabbi Dollin talked about seeing an animal slaughtered for the first time: “We all experienced what it felt like to have the life flow out of an animal. We witnessed a shochet who did his work with piety, humility and exacting care. We all experienced how difficult and slow the process is in taking animal life and preparing it for our own consumption. It was a deliberate process, a process limited and specific and intentional. It was hard to do.”

In Boston, the Beantown Jewish Gardens’ Young Adult Learning Series recently featured a kosher slaughter as well (at other sessions in the series, participants learned to brew their own beer, compost, preserve their own fruits, and make bread). The organizers hoped the shechtingwould “unmask the mysteries of kosher meat production and explore how the conscious practice of kashrut changes and deepens our relationships with G-d, animals, and the earth.” One of the program organizers, Leora Mallach, said in an email interview that the aim of the program was to “increase conversation about relevant issues and teach tangible pieces or skills that people can walk away with.” And it seemed that the experience was indeed tangible. One of the participants in the Beantown shechtingsaid afterwards that “There is something very inspiring and grounding in seeing the physicality and the spirituality of how our food gets to us in a kosher manner. It is one thing to see a symbol on a package. It is quite another to see a trained shochet say a bracha and follow a strictly prescribed process to actually shecht an animal.”

The idea of really knowing what it means for food to be kosher is what drove two Reform rabbinical students, John Whinston and Gersh Lazarow, to teach themselves how to shecht chickens. They recount their experience in the newly published compendium The Sacred Table. As Reform Jews, they found they had to teach themselves how to shecht because they were unable to find a trained shochet to teach them, saying that “Some even laughed at the idea”. When the shechting was over, they determined that they had made four of six kosher cuts, and then set about reflecting on the experience. “It is difficult to describe how humbling this experience was and how much it affirmed the belief that our kashrut is not something we should outsource to either multinational companies or religious organizations that don’t share our sensibilities, ethics, or values.” These two rabbinical students spent a year of their lives questioning their own values, and the values of the religious community overall. They explored kashrut, sustainability, ethical slaughter, and even workers’ rights; ultimately deciding that finding the proper balance of all of these different aspects can be exceedingly difficult, but important nonetheless.

All of these stories seem to come to similar conclusions: experiencing shechitah first hand may not have made participants permanently alter their eating habits or lifestyles; but they also all agree that it is an experience that makes you take another look at the way in which you think about what you are eating and where it comes from.

Today the laws of kashrut (and shechitah in particular) are in the spotlight around the world: as kosher meat plants are under investigation for human and animals rights violations, and in the Netherlands they have banned the slaughter of animals without stunning them first (making Kosher slaughter illegal). It will be interesting to see what happens in the years to come as the local/sustainable food movement continues to expand — will it continue to expand to kosher meat as well?

Editor’s Note: Would you like to “lift the cellophane veil” and experience *shechitah for yourself? Join us at the Hazon Food Conference, August 18-21 at UC Davis in California. For more information visit www.hazon.org/foodconference*

Nadia Schreiber, one of Hazon’s summer interns, was born and raised in Tribeca, NY and is currently a junior at Middlebury College in Vermont studying International Studies. She has spent this past semester studying in the school of History, Philosophy and Sociology at the University of Havana in Cuba.