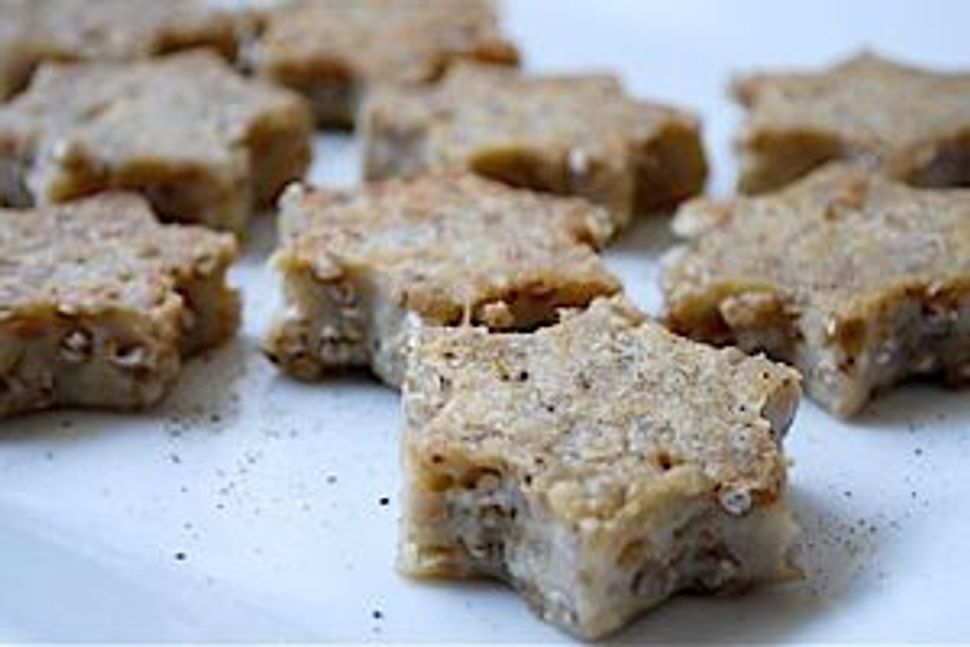 What would you do with a one-pound bag of toasted buckwheat groats, a.k.a. kasha? If you’re like most Ashkenazi Jews, you’d probably cook up kasha varnishkes, the Jewish “soul food” side dish made of kasha, sautéed onions, bowtie pasta, and often mushrooms. If you’re not Jewish, well, you probably wouldn’t have the kasha in the first place!

If you’re wondering why buckwheat hasn’t caught on here like other whole grains, try tasting it on its own. It’s bitter and bland, probably why our people resorted to mellowing its flavor with carb-heavy pasta, sweet caramelized onions, and plenty of schmaltz. (It’s worth noting that buckwheat is, in fact, not a grain at all, but a fruit in the same family as rhubarb and sorrel — but who’s keeping track?) But buckwheat is worth a second look, not only for its sentimental value but because it’s high in protein and fiber, and contains a significant amount of manganese, magnesium, and Vitamin B-6. It seems that our time-honored way of preparing kasha could use a twenty-first century makeover.

Kasha has been part of the Ashkenazi diet for so long, you might say it’s in our DNA to crave it. Kasha made its way west from China when the Tatars — Turkish tribes who were conquered by the Mongols — invaded Russia and Ukraine in the 14th century. In Slavic countries, the word “kasha” refers to any grain porridge, but for Ashkenazi Jews, the word came to refer specifically to toasted buckwheat groats. Buckwheat caught on in the Baltic Region, where it was an essential part of the diet, and in the late nineteenth century, Eastern European Jews who immigrated to the United States made it popular here.

According to Gil Marks, author of “The Encyclopedia of Jewish Food” most buckwheat groats sold in the United States today sell in major urban Jewish centers like New York, Los Angeles, and South Florida. A 2007 query on Chowhound.com’s Home Cooking board about what to do with kasha elicited fifty-three passionate responses, and any Jewish cookbook worth its weight in pickles includes a version of kasha varnishkes.

Since last year, mega-chef Jean-Georges Vongerichten’s much buzzed-about ABC Kitchen restaurant has featured a rich haute cuisine version of the dish that comes with veal meatballs and crisped kasha; it has garnered rave reviews from customers and restaurant critics alike. Evidently, we still have a soft spot for this food from the old country.

When I recently found myself with a pound of buckwheat groats, I turned for advice to Eric Tucker, executive chef and founder of the innovative vegan restaurant Millennium in San Francisco, where I had my first cooking job. Buckwheat groats have graced the Millennium menu in many forms over the years. I wondered why he would choose to spotlight this very marginal grain. Was it perhaps because of his Jewish heritage? “Heck yeah!” says Eric. “I ate kasha varnishkes as a kid, with mushrooms, and bow tie pasta. I miss them and I miss my mom making kasha varnishkes.” Sometimes the restaurant menu is a way to reawaken favorite tastes from the past, “Once in a while I’ll pull influences from my Jewish heritage such as doing a split peas soup with roasted kasha as a garnish which reminds my of my mom making split pea soup with kasha,” he added.

Tucker recommends using kasha in hearty salads with bold and sweet accompaniments, like pomegranate seeds and cubes of roasted pumpkin. He also likes to combine it with other grains. Here is Tucker’s version of polenta nera, a traditional Italian peasant food of polenta porridge made from coarsely ground buckwheat groats instead of corn. Seasoned with olive oil, garlic and rosemary, Tucker’s rustic polenta is a dish that pairs well with sautéed summer or fall vegetables. His favorite way to eat it, though, is with a quick mushroom Marsala sauce. “Hopefully you can get your hands on some fresh Porcini mushrooms, which ‘fruit’ under the coastal pine in November out in the SF bay area,” he said. We should all be so lucky! If you’ve got some forgotten kasha hidden away in your cupboard, pull it out and honor your bubbe by making this fresh spin on kasha varnishkes.

1) Heat a small saucepan over medium heat, then add the olive oil, garlic, and rosemary. Sauté until the garlic just turns amber. Remove from the heat and set aside.

2) Heat the water or stock. Add the salt and bring it to a boil. Slowly add the polenta while whisking. Turn down the heat to a low simmer and continue to cook, whisking often, for 10 minutes.

3) Stir in the groats and simmer another 10-15 minutes adding extra water or stock if too thick. When the mixture starts to pull away from the pan, it’s cooked through. Stir in the reserved garlic and rosemary and adjust the salt and pepper to taste.

4) Either serve as is, or fold in cashew milk and nutritional yeast for vegans, or add cream, butter, or a grated hard cheese like aged Asiago.

Variation: Pour the polenta into a baking dish and cool until firm. Slice into shapes and broil, or pan sauté until crisp.