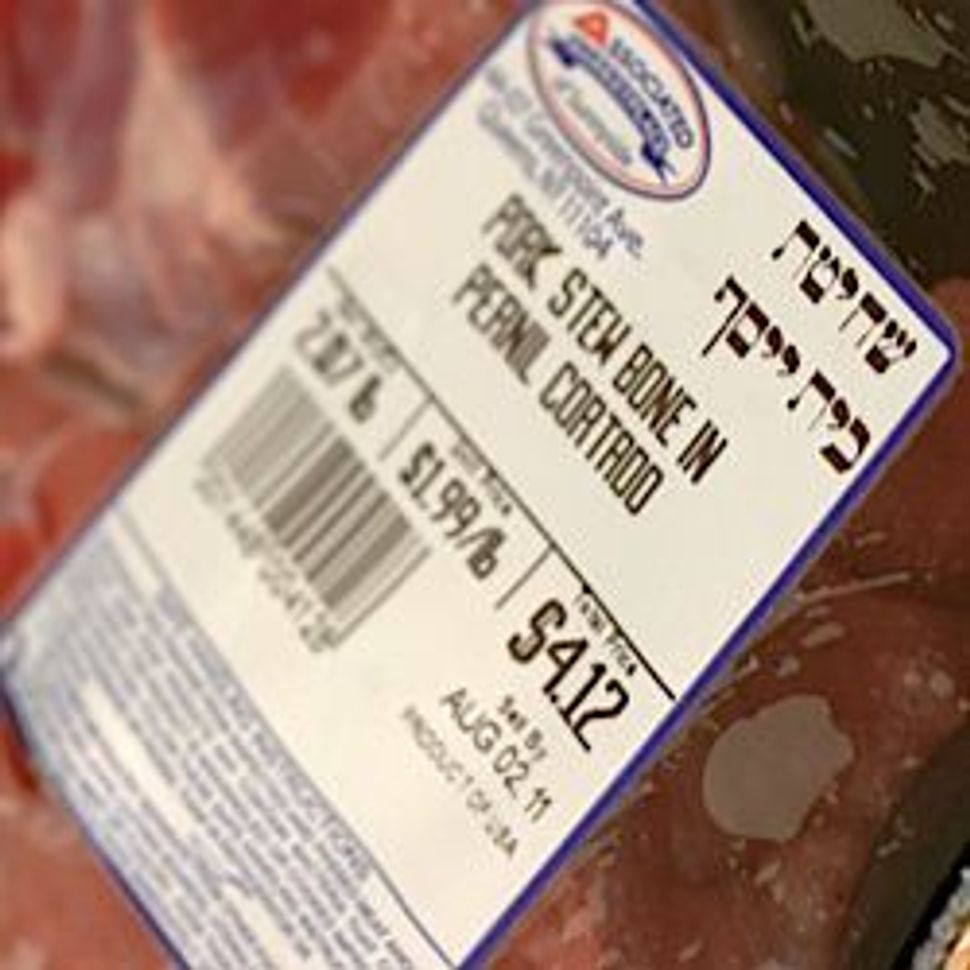 Kosher Pork?: This package, along with several others, lined the shelves of a Queens, NY supermarket. Image by Oded Hirsch

With all the recent talk about Jews and their love of bacon, could the advent of kosher pork really be far behind?

It appeared that the dream of kashrut-observant Jews with a hankering for the taste of treyf had come true on July 27 when photographer Oded Hirsch spotted a whole bunch of pork (spare ribs, pork chops — you name it) labeled as “Shechita Beit Yusef”(ritual slaughter of the House of Joseph) at an Associated Supermarket on Greenpoint Avenue in Sunnyside, Queens, a multi-ethnic neighborhood with a current Jewish population much smaller than it once was.

Alas, this kosher pork bonanza was too good — not to mention halachically impossible — to be true. Hirsch sent the photos to Philip Gourevitch of The New Yorker, who immediately set out to investigate this oxymoronic phenomenon.

It turns out that the meat, which was in actuality just regular, run-of-the-mill pig flesh, was mislabeled by an automated machine. It seems that the machine, a recent second-hand purchase by the supermarket, had been previously owned by a store that did, in fact, sell kosher meat (and you can be sure none of it was porcine). The machine had been set to stamp “Shechita Beit Yusef,” a Sephardic hekhsher, and no one had bothered to delete that feature before transferring it to a store that does not sell kosher meat, and even specializes in good cuts of pork.

The supermarket manager removed the meat from the shelves immediately after having been alerted to the mistake by Gourevitch. And you can be sure that the kashrut authorities had something to say about the incident. “He [the store manager] had a person from where he bought the machine delete the words,” wrote Rabbi Luzer Weiss, the director of the New York State Department of Agriculture and Markets Kosher Law Enforcement to Gourevitch in a follow-up email. “The machine now can’t print any kosher labels — I saw it myself this morning and had labels printed which I took with me,” he assured the writer.

Those who care deeply about following the food-related laws, and especially those who enforce them, dread these kind of rare occurrences. As Howard Katzenstein of the Orthodox Union put it to Gourevitch, “Computer-generated labels, they’re a nightmare waiting to happen.”

There are no reports of any Jewish pork lovers managing to grab some of that meat while it was in that never-never land between treyf and kosher. In any case, they are going to have to just keep dreaming their dreams. Even a sprinkle of fairy dust — let alone an erroneous label — can’t make them come true.