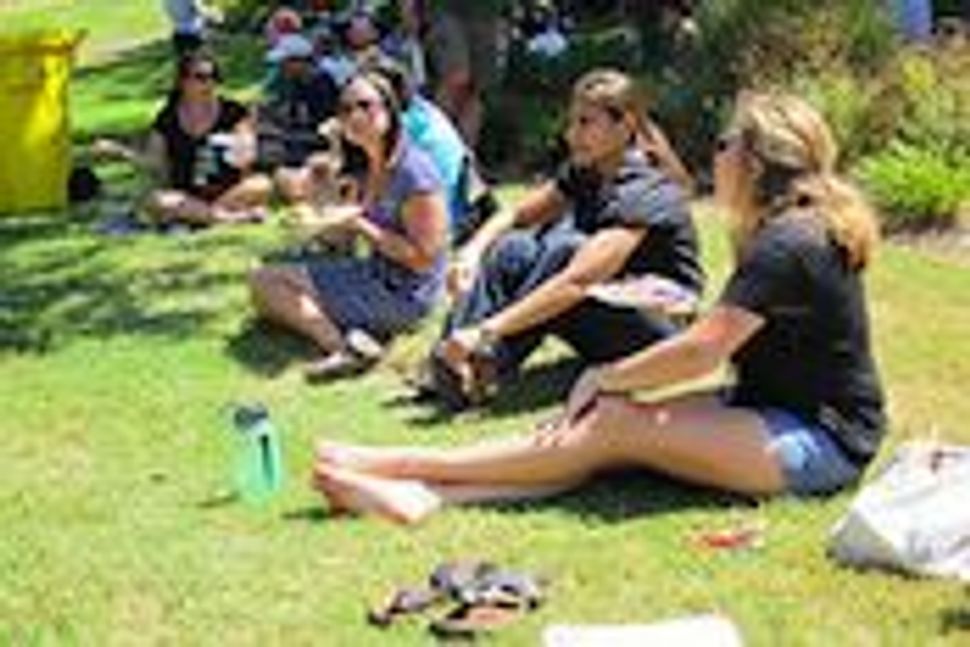 August 18, 2011 marked the first day of Hazon’s annual Food Conference. The four day gathering at UC-Davis, a global leader in sustainability projects, united people from Colorado to Japan under open blue skies and amongst beautiful trees, flowers, creeks, and even a dairy farm and winery. Food, fun, and activities aside, the 311 person gathering had an intense agenda including seven program tracks like Food Systems and Policy and Jewish Agriculture.

The Food Justice and Tikkun Olam track provided an opportunity for community activists, teachers, students and foodies alike to learn from one another about our complex food system and a broader movement to address hunger, poverty, workers rights, and food access both locally and abroad. Pursue, a project of American Jewish World Service and AVODAH, hosted a session called “Community-Supported Agriculture (CSA): A Vehicle for Collective Action and World-Changing!” The workshop provided a platform for learning, idea sharing, and, ideally, continued conversation and collaboration. All three presenters were recipients of the Pursue Food Justice Scholarship, a pilot initiative to strengthen the food justice programming at this year’s conference.

The first presenter, Naomi Ableson, Social Action Specialist at the Religious Action Center and Union for Reform Judaism in NY, began by asking participants to stand and read one of many varied statements about CSAs. After hearing the sentence, people scattered across the room to side with “yes/agree,” “no/disagree,” or “neutral/undecided;” the activity was not only interactive and engaging but also telling.

Opinions varied across the board- some said they see CSAs as trendy and popular while a smaller percentage said their CSAs tend to run under the radar. Gary Brandt, a self-described big time foodie, avid cyclist, and cilantro-lover from Utica, Mississippi, said that his CSA is, “a small scale operation in a place where no one has heard of CSAs.” After getting a sense of individual and communal perspectives on the subject, Naomi led the group into a discussion of how CSAs can or should support the Food Justice Movement and provided a chance for small groups to chat about action steps moving forward.

“I believe CSAs are integral to the Food Justice Movement”, read one participant, and the room seemed to split. Some highlighted the support and energy their communities provided while another said that she had “ already gained awareness and involvement without the CSA.” Statements like this exhibited the different backgrounds and experiences present, while statements like “I believe CSAs can be integrated into a low income neighborhood” brought almost everyone to the “strongly agree” side of the room. When asked what they viewed as the primary purpose of CSAs, Miriam Liebman of Detroit, MI – yet another recipient of the Food Justice Scholarship- said she sees this as “one of many ways to give back”; a piece of a much broader picture of action steps and the implementation of lasting change.

Sasha Feldstein then introduced herself as a core group member (or primary organizer) of the Brooklyn Bridge CSA, which was started through a partnership between Pursue and Hazon with an explicit focus on food justice. Before organizing a CSA around food justice, the group needed to define just what this term meant; for them it necessitated pricing plans and levels for lower income members and involved reaching out and partnering with other organizations in the community doing related work. This also allowed them to connect their resources to individual needs. This year, they had an abundance of donor shares which help to subsidize shares for low income members. Since they had more than they needed, they were able to donate their extra shares to low income members of the South Bronx CSA —17 subsidized shares to be exact. The passion and commitment in the room were tangible as Sasha enthusiastically passed the presentation over to Steven Deheeger of the South Bronx CSA.

Deheeger portrayed the impoverished landscape of the South Bronx using audience members and statistics about poverty, food hardship, and hunger in the 88,000 person district. 5 of the 10 volunteers stepped forward representing the 49% of children there living in poverty. Steven described the importance of long term goals for change, not only visions of immediate accessibility. Sliding scale prices certainly help, he said, but “we are looking at innovative ways of creating immediate affordable access to fresh produce while working together as a community to create change in our food system.” He closed his presentation with a personal video documenting the culinary lives of his CSA members as they opened their kitchens for demonstrations on how to use their veggie share in fun and healthy ways, including making pico de gallo and potato soup.

Idea sharing and brainstorming goals for moving CSAs and communities toward collective action followed. Ableson introduced a holistic approach to what she called the “effective social action agenda.” The three-pronged method consists of hands-on learning/ volunteering, education (both learning about issues at hand and partnering that with Jewish values) and advocacy. Presenters and participants alike encouraged one another to return home and engage their friends, colleagues, and neighbors in meaningful and impactful ways to advance social, economic, and environmental justice. By deconstructing their specific objectives, participants recognized what resources they have and need to have at hand, who is there and can be there to help, and what can be done in both the short and long term for leveraging CSA power to build community and inspire collective action.

Liz Kohn, originally from Evergreen, Colorado, is a Masters in Social Work 2012 candidate in the University of Michigan’s Jewish Communal Leadership Program and is Hazon’s Social Work Intern. Her professional and volunteer work and travels have deepened her desire to develop skills in meeting both individual needs and communal challenges related to accessibility and affordability of fresh, healthy food.