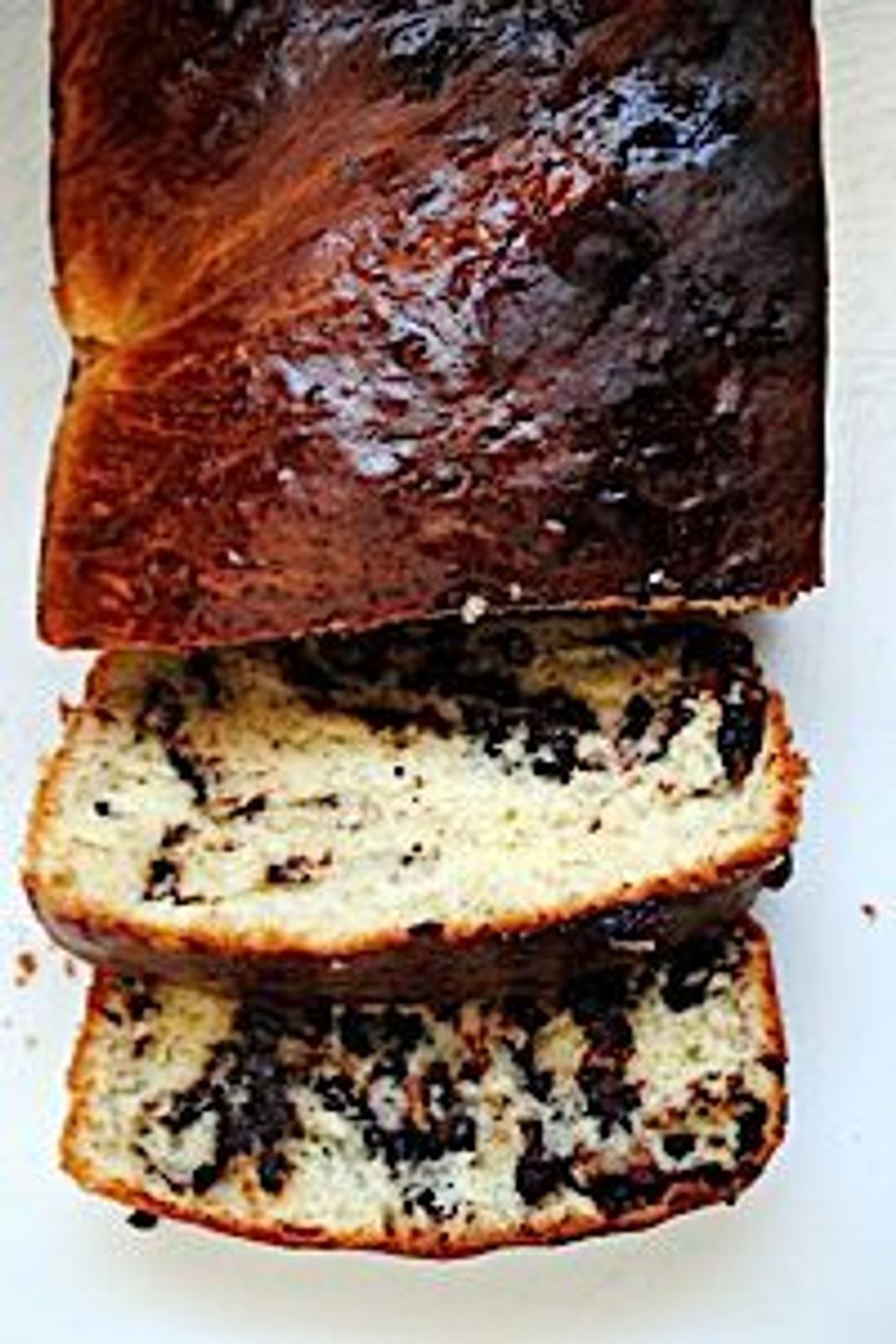 According to Gil Marks in “The Encyclopedia of Jewish Food”, babka originated in Poland or Ukraine where the word baba (similar to the Yiddish word bubbe) means grandmother. Babka is the diminutive, and the name arose either because grandmothers were the primary purveyors of this treat or because the tall, fluted pans originally used resembled folds in a grandmother’s skirt. Marks notes that the Jewish-style loaves probably came about in the mid-nineteenth century as a way to turn extra challah dough into a Shabbat treat.

Today loaves of babka typically come in chocolate or cinnamon varieties, with chocolate leading the polls by a longshot. Green’s kosher bakery” in Williamsburg is New York’s primary babka supplier, baking the goods for everyone from Zabar’s to Russ and Daughters, and from Whole Foods to Dean and Deluca. Of the approximate 12,000 loaves of chocolate and cinnamon babka they churn out weekly, chocolate makes up the clear majority.

While chocolate may be the current babka poster child, it is in no way traditional. Marks and others argue that cinnamon was the original flavor. Ari Weinzweig of Zingerman’s Community of Businesses (which includes the immensely popular eateries Zingerman’s Deli and Zingerman’s Bakehouse) in Ann Arbor, MI contends that chocolate was a luxury item in the Eastern European shtetls in which babka originated and was more likely a more recent Jewish-American invention.

So how did chocolate make its way into babka? “My guess,” says Zingerman, “is that some baker decided it would be a good move to try it and…it’s chocolate and it’s babka so…it sells!” Amy Emberling, one of the partner’s at Zingerman’s Bakehouse, notes that in her experience even cinnamon doesn’t appear until later and believes that walnuts and poppy seed fillings were dominant early on.

Cookbooks are little help, offering as many versions of babka as there are Jewish grandmothers. “The Israeli Cookbook” (1966; out of print) by Molly Lyons Bar-David, for example, has a recipe for bobke, or “butter buns,” as she calls them. These have just a little sugar and “raisins, as desired” mixed into the dough and are shaped as buns instead of loaves. Meanwhile, in Joan Nathan’s “The Foods of Israel Today” the recipe for Bubby Irma’s Babka calls for a meringue-like filling topped with raisins, walnuts, shredded coconut, cinnamon and jam. Some, like Martha Stewart, solve the chocolate-cinnamon dilemma by including plenty of both in her rich recipe. And I’m not going to even get into the debate on streusel-topping, which the bread is sometimes topped with.

With such variations — and the knowledge that chocolate is not, in fact, traditional — it begs the question: why aren’t there more creative takes on babka? Joan Nathan, in a 2007 New York Times article, recalls a pleasantly surprising babka at a Michelin-starred restaurant in France where what appeared to be chocolate turned out to be olive tapenade and anchovies. But this is a rarity rather than the norm. As chefs around the world have fun dressing up donuts, why not get a little creative with the similarly humble babka?

We’ll start slow, with a recipe for babka filled with chocolate and dried cherries, below. But take this as a call to get a little adventurous in the kitchen, let your hair down and fire up the oven. Bananas and peanut butter? Brandy-soaked cherries? Nutella and crushed hazelnuts? Pizza toppings? What’s the craziest babka you’ve eaten, made, or dreamed up? Share it with us in the comments section and make a new tradition.

Baker’s Note: The recipe below includes butter and so is not parve. For a parve recipe to serve with meat consult babka recipes by folks like Paula Shoyar and Gil Marks who use margarine and/or oil instead.

1) Heat the milk to 105–115°F in a small pot. Stir together the warm milk and 2 teaspoons sugar in a heat-proof bowl. Sprinkle yeast over mixture and let stand until foamy, about 5 minutes. If the yeast does not foam then you should discard it and start over with fresh yeast.

2) Add ½ cup flour to the milk mixture and stir with a wooden spoon until fully combined. Add the eggs, vanilla, salt, and remaining ½ cup sugar and stir thoroughly with a wooden spoon until combined. Mix in remaining 3 cups flour, a little at a time, until fully incorporated. Stir in the butter, a few pieces at a time, and continue to stir until butter is fully incorporated and dough is shiny, about 6 minutes. (Don’t worry if the dough is very soft and sticky; that is good.)

3) Transfer the dough to a lightly oiled bowl and cover with plastic wrap. Put in a draft-free, room temperature place and allow to rise until doubled in size, 1½ to 2 hours.

1) Butter two loaf pans or line with parchment paper. Punch down dough with your fist or a lightly oiled rubber spatula, then halve. Roll out 1 piece of dough on a floured surface with a lightly floured rolling pin into an 18- by 10-inch rectangle and arrange with a long side near you.

2) Beat together the yolk and cream. Using your hands, spread half of the softened butter on the dough, leaving a ½-inch border all around. Brush some of egg wash on the long border farthest from you.

3) Sprinkle half of the chocolate evenly over the buttered dough, then sprinkle with half of the dried cherries (½ cup). Starting with long side closest to you, carefully roll the dough into a snug log, pinching firmly along the egg-washed seam to seal. Bring the ends of the log together to form a circle and pinch to seal. Twist the entire ring twice to form a double figure 8 and carefully transfer to one of the loaf pans.

4) Make another babka with the remaining dough, some of egg wash, and remaining butter, chocolate, and cherries in same way. Chill the remaining egg wash, covered, to use later on babka. Loosely cover the pans with plastic wrap and allow the babkas to rise in a draft-free place at warm room temperature until the dough reaches the tops of the pans, 1 to 2 hours. Alternatively, you can let the dough rise in the pans in refrigerator for 8 to 12 hours; bring to room temperature 3 to 4 hours before baking.

5) Put an oven rack in middle position and preheat oven to 350°F. Brush the tops of the dough with the remaining egg wash. Bake until tops are deep golden brown and bottoms sound hollow when tapped (when loaves are removed from pans), 30 to 40 minutes, rotating halfway. Transfer loaves to a rack and cool to room temperature.