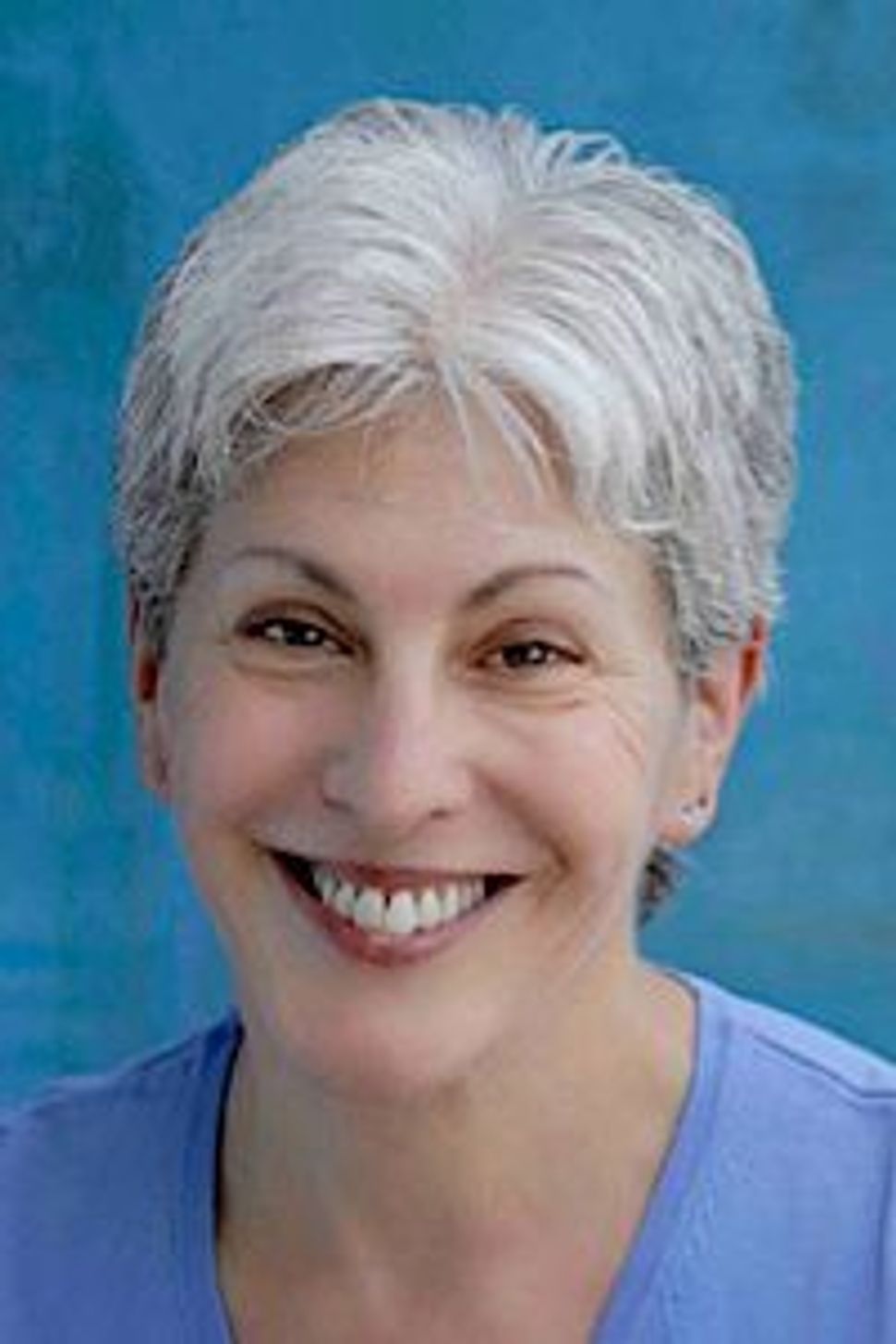 Mollie Katzen may be the godmother of vegetarian cuisine and one of the founding owners and chefs of Moosewood Restaurant in Ithaca, NY, not to mention one of the best-selling selling cookbook authors of all time, but she swears she never really intended to have a career in food. “It was never a goal at all,” she says.

Growing up, she wanted to be an artist. She never went to culinary school and instead saw cooking as simply a hobby that could help support her painting.

But eleven cookbooks later — with a twelfth on the way — and Katzen’s youthful avocation has long since become her life’s work. Of course, those familiar with Katzen’s cookbooks know that many of them, including the beloved “Moosewood Cookbook”, are adorned with her artwork on their covers.

While she is known for bringing vegetarian eating to the masses and likes to eat “mostly plant food,” she insists she is not anti-meat. Still, she says, “Where I’m coming from, meat is guilty until proven innocent.”

We talked with Katzen, 60, who left Moosewood long ago, about growing up kosher, how she got into vegetarianism and her foray into Harvard’s dining halls. True to form, Katzen also shared one of her newest recipes: broccoli-infused Green Matzoh Balls, perfect for the upcoming holidays.

Gianna Palmer: How did you first get interested in food and cooking?

Mollie Katzen: I had moments of discovery all along in terms of learning different things about food. But the impulse to be in the kitchen— I was just born feeling at home in the kitchen. That just felt very natural to me. And I never decided “I’m going to do a food career” when I was a kid. There was really no such thing. Being a chef wasn’t even a career then. It was very marginal.

So what do you consider yourself now?

I really refer to myself as a cookbook author. I don’t teach cooking classes per se, but I do speaking. And I am finding that my mission— first of all I found that I actually have one — is to really encourage people to cook at home. To learn how to cook as part of being human.

I’d like to bring cooking down a few notches from this kind of pedestalized, exotic, kind of fetishistic hobby. I hate the word “foodie.” I hate that word with a passion. I find it really upsetting.

Yea, it’s just like, there are certain kinds of people who are interested in food, and it’s this oddball, sort of specialized thing. And everyone else isn’t. To me, the fact that we even have a word “foodie” in the vocabulary indicates that we’ve gotten very detached from our birthright as beings who eat, and have sensuality. As if that’s a noteworthy thing or an exclusive club.

How did you first get started having your career in food?

I never really intended it. Even as it was happening, it came through the back door, in a way. I was an art student and I wanted to be a painter. In order to support my art studies, I needed to have a job. I started working restaurants in restaurants when I was 15, mostly in the kitchen.

I’d grown up in a kitchen where— this was very typical of the time— most of the vegetables we had were frozen vegetables. And discovering fresh vegetables for the first time when I was in my teens made me especially appreciate them. To me this was the most exciting thing in the universe. So I wanted to learn as much about that as I could.

How did you get into vegetarianism so far before it was mainstream, and what made you co-open Moosewood?

This would be a book in and of itself. In very brief, I just loved vegetables and new ways of cooking. I was never into “vegetariansim” per se — just loved the cooking, and wanted to avoid meat in non-Kosher settings. I co-opened Moosewood because I was invited to join the group that was led by my brother. I was the only one they know who had that degree of (or any) restaurant cooking experience.

Did growing up in a Jewish household affect your view of food?

Absolutely. We were very observant conservative Jews. We had a kosher home. I would notice on the nights when we didn’t have meat my mom made like 5,000 different things… because she was always so concerned that if you don’t eat meat you’re going to drop dead of starvation. I always found that dairy night was the most interesting night of the week.

I also got my suspicion of meat from it. Long before there were any discussions about whether meat was sustainably raised, I learned form kashrut that meat needed to be humanely slaughtered in order for us to even be allowed to eat it.

…I’m not observant now, but I feel deeply, deeply Jewish. My sense of food is more sacred than ever. The whole mindful eating thing and not wasting your food, and respecting food, I got that from my Judaism. Definitely.

What sort of projects are you working on lately and what’s next?

I’m working on my twelfth cookbook. On the side I do speaking, which I love. I’ve enjoyed a career as a speaker and also as a consultant. I work with universities, mostly with Harvard. Consulting on the menus, talking to students, and giving little cooking classes. A little teaching, a lot of consulting with the dining services.

I’m also working with the medical field now. A lot of HMOs and medical practitioners have not, until recently, understood the connection between healthy eating and prevention.

When is your cookbook coming out and what its focus?

We’re aiming for 2013. It’s like the story of my cooking. It’s mostly recipes— over 200 new recipes. I feel like my cooking, when I started, was beginner’s luck. I was a neophyte, I was just learning. I didn’t write a cookbook because I knew all there was to know. I wrote the Moosewood when I was at the very beginning of a journey of learning how to cook. At this point it’s a recap of where my cooking is and how it’s changed, what I’ve learned, what I do differently. We’re calling it “The Crispy Sage Chronicles.”

What would your advice be to people who want to have a career in food?

I have no idea. Even though I’m still doing it myself, I think there’s a real glut of food writing now that there are so many bloggers out there. There’s just too many.

There is sort of an oversaturation. But in a way, do you think that’s a good thing? Just that so many people have an interest?

Do you have any food blogs that you like to read, or any particular ones that you’re a fan of?

I have a couple that I love that are completely unknown. I have a couple friends here in the Bay Area who I think are extremely talented: Out to Lunch, Food Wanderings and Broke Ass Gourmet

Upgrade the nutritional profile of the humble, traditional matzoh ball by adding finely chopped broccoli to the mix. It works incredibly well! And you can innocently slip these to people who think they don’t like broccoli! They will be surprised, and, when they get over their brief anger, will thank you profusely.

You can use a food processor fitted with the steel blade to mince the broccoli, if you cut it into 1-inch pieces first. This is a good way to get the pieces really small.

1) Break the eggs into a medium-large bowl and beat them with a whisk. When they are smooth, beat in the oil.

2) Add the broccoli, matzoh meal, and salt, and if you like, some black pepper to taste.

3) Cover the bowl with plastic wrap, and let the batter firm up in the refrigerator for at least an hour. (Longer is fine. In fact, this will keep for up to two days or even longer.)

4) Put up a large kettle of water to boil. When it boils, reduce the heat to a simmer.

5) Meanwhile, form one-inch balls with the batter, dampening the palms of your hands with water so the batter doesn’t stick. Gently slide the matzoh balls into the simmering water, and let them cook for 40 to 45 minutes. They will almost double in size. If you plan to serve them the same day, just leave them in the cooking water until serving time. They won’t overcook. If you plan to serve them a few days later, drain them, then store in a tightly-covered container in the refrigerator.

6) To serve, heat the vegetable broth or chicken broth to your desired temperature. Place several matzoh balls in each serving bowl, and ladle the hot soup on top. Serve hot.