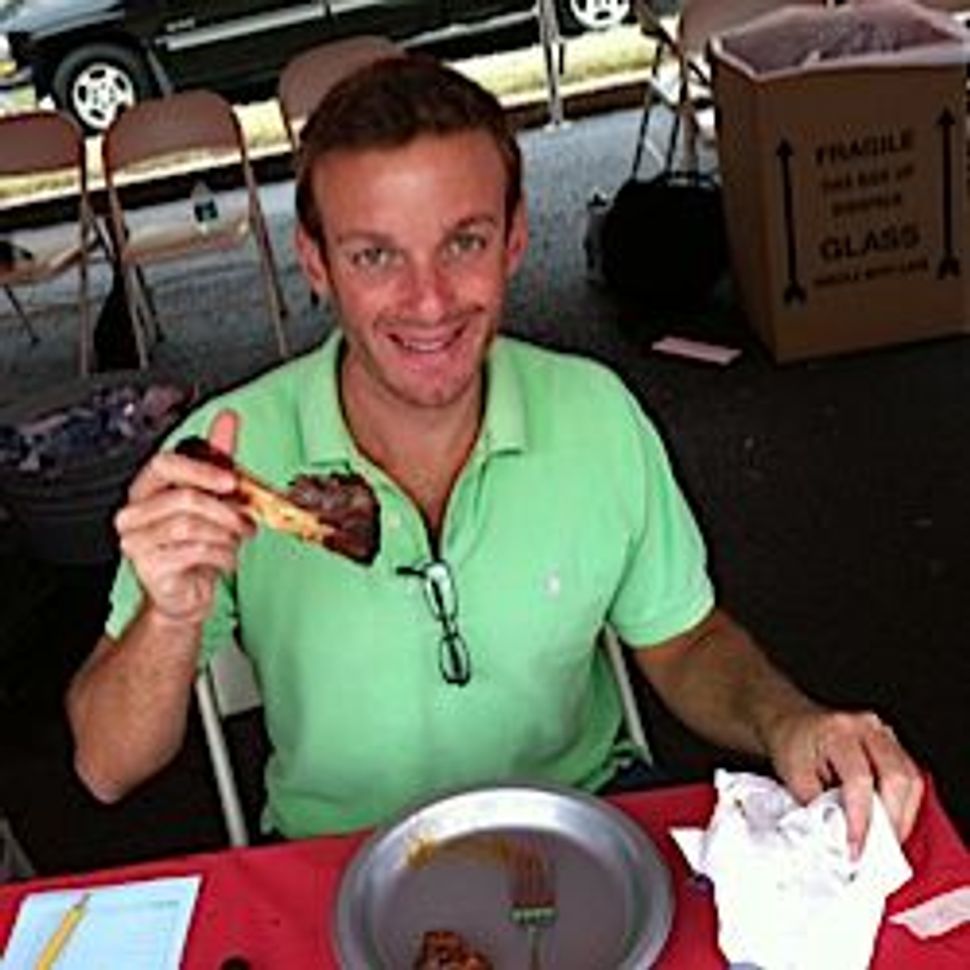 Image by Courtesy of Eli Rosenberg

“Take a bite, and if you don’t like it, spit it out!” said the veteran BBQ judge to my left as I eased into a folding chair, the smell of kosher brisket and ribs hovering over a packed parking lot of an Orthodox synagogue in Memphis on Sunday.

Before a recent move to Memphis, I considered myself to be pretty comfortable around a grill. After all, I was raised in Kansas City, and spent the last five years working in Texas, two areas of the country where BBQ is king. But as I sat down at the judges table at the 23rd Annual Anshei Sphard-Beth El Emeth (ASBEE) World Kosher BBQ Championships on Sunday, I realized I was entering a whole new world of sauce and flavor.

As I sat there waiting for my first taste of rib, the irony of all of this entered my mind. In Memphis, when it comes to barbeque, pork is a staple. As a somewhat practicing Jew, that means all I know about Memphis BBQ is what I’ve been told. In a sense, that’s how this all started. It was the late 1980s, and a couple of men sitting in the back of Shabbat services started lamenting about their inability to enter The Memphis in May World Barbeque Champions, a premier event in BBQ circles. The event is held on a Saturday in May, and focuses heavily on treyf, disqualifying many in this heavily-affiliated Jewish community. So from that, an idea was cooked-up, a Jewish BBQ contest.

Now, 23 years later, nothing is left to chance. Teams from as far away as Atlanta, a six-hour trek, and Birmingham, Alabama, 4 hours down the road, started showing up on Thursday. For $125 plus the price of the brisket or beef ribs, everything is provided, from seasonings, (There were easily three dozen different kinds of spices and liquids laid out on a table in the synagogue’s social hall) to the grills, to ensure everything stays kosher. The real fun starts at daybreak on Sunday, when more than 40 teams start firing up their grills.

As a first time judge, I was instructed to show up around 11 a.m. for instructions before the rib competition began at the bottom of the hour. I arrived early and quickly realized, this event just wasn’t just about the meat, but also about a chance for the community to meet. I asked one organizer about it, and he said this was THE event that drew Jews from all sector of this community of around 10,000 together. Each team has a booth, many of the cooks wear costumes, and all have creative names, playing off of Jewish themes. (Like, Delicious, Devine, and Devoid of Swine from Atlanta and last year’s winner for best name: Lebron Flames and the Miami Meat.) Creativity might start in the cooking, but extends well beyond.

But make no bones about it, while the community comes together, for those who put their names and their recipes on the line, this competition is about meat.

So, as the first large steaming rib, drenched in sauce, with the fat glistening under the overcast sky, I honestly didn’t know what to expect.

“Imagine the best rib you’ve ever had. If you taste that today, give it a ten,” the veteran judge to my left said we prepared to take our first bite.

The tender meat nearly fell of the bone and into my mouth, the flavor was exquisite. I immediately thought, THIS is the best rib I’ve ever had. Instantly I worried though. I had been selected as a “celebrity” judge through my day job (as a reporter for ABC), but my profession offers no qualifications for this kind of work. My mind raced. What if I thought all the ribs were a “10” and what would my veteran seat-mate think if I just gave everyone a 10? Integrity standing, I wrote a 10 on the score’s sheet with conviction and prepared for Round II. As I ate rib after rib, I realized there is a difference, and my scores reflected that. Many of the judges agreed, when it comes to kosher meat, there isn’t a reason to add salt, and the less sauce the better.

In the years since the first competition of just a few teams, this kosher-fest in the heart of the Mid-South has evolved. Dozens of teams participated in a 3-on-3 basketball tournament. There was a petting zoo, and a band played as people chowed down on kosher brisket sandwiches, baked beans, and coleslaw.

And it may not end here. For the first time, a team from the Memphis Islamic Center (the “Halal Smokers”) participated, and several guys from Long Island attended the event on Sunday, taking notes with hopes of launching a similar contest on the East Coast. A team from Birmingham was present after winning a similar contest there, and organizers are talking about creating a kosher barbeque circuit, with hopes of awarding a champion at this festival every year.

If a Sunday in September in the parking lot of an Orthodox shul in Memphis is any indication, I sense this pork-loving city and its annual BBQ contest may soon find some kosher’ites ready to fight charcoal with charcoal.