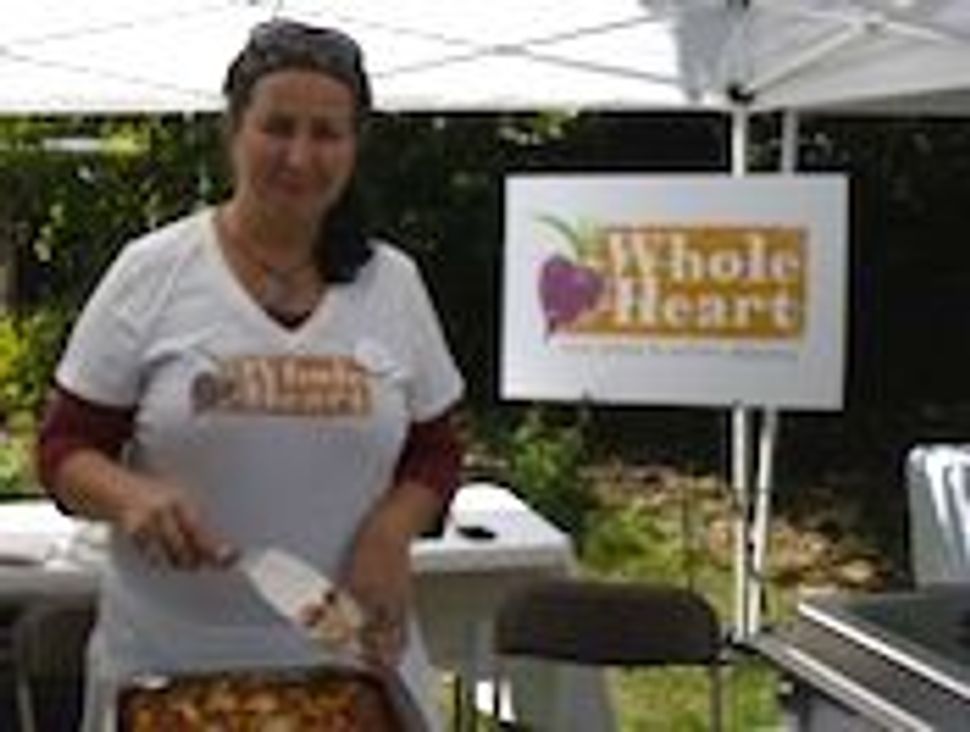 Once erroneously thought to be a swampland, the university town of Ann Arbor, MI and surrounding Washtenaw County are actually ideal land for farm stock. Many German Jewish immigrants settled in the small town and became farmers, peddlers, fur and skin traders, and eventually business owners, many of which were grocers. Over 170 years after European Jews brought their families, foods, and traditions to Michigan, the Jewish duo and modern snack makers behind WholeHeart Group are bringing a unique vision to life in and around Ann Arbor. With underlying Jewish values and personal histories woven throughout their professional and personal endeavors, they are striving to create healthy, prepared foods and use all profits to help under-served populations gain the skills needed to succeed in the healthy food business.

WholeHeart’s Patti Aaron and Dena Jaffee are showing Ann Arbor and surrounding areas what happens when a love for cooking and helping others permeates food. The quality of ingredients in products like their Cherry Crunch granola speaks for itself; with Michigan-grown oats, ground flax, and dried cherries, the taste is hard to resist. Each ingredient tells a story too: Hungarian Jews once harvested an abundance of sour cherries during the fall months, which is linked to their prevalence in Shavuot dishes like sour cherry pies and soups. WholeHeart’s commitment to the small producer also mirrors days of old in Jewish Ann Arbor as peddlers and tradesmen sold directly to consumers and through select food merchants.

Years ago, Jaffee was denied the opportunity to work and live at a kibbutz because of her mother’s conversion, but she later recreated a kibbutz-like scenario with communal living and gardening she feels influenced WholeHeart’s growth strategy: “I really liked that model of growing food together, cooking together, eating together and was always really attracted to that lifestyle.” For WholeHeart, this means building a web of providers who uphold integrity at all levels, from the sourcing to the production and sales. These include potential small retailers like Chelsea, Michigan’s Back to the Roots, a like-minded retailer whose primary purpose is to help the needy worldwide in a variety of ways.

WholeHeart is determined to be a model social enterprise, what Aaron calls a “for profit with a non-profit heart,” that uses its profits to benefit community. They have a big agenda striving for sustainability in food ingredients and production and set a high bar for their food, which must be nutrient rich and healthy without harming the environment in the process. Jaffee and Aaron see this as the only way to build an honest, community-based company and say the biggest obstacle for small food purveyors is the cost and accessibility of commercially licensed kitchen space. This is a challenge their Jewish and broader networks are helping them overcome in a way that maintains the grass roots feeling that WholeHeart and its founders aim for.

Jaffee, WholeHeart chef, teacher, and food and farm advocate strongly believes in reconnecting the dots between the farm and the table. Her father came to Michigan from Ohio, where his family owned a delicatessen. She learned about Jewish culinary traditions from her mother and watched as family and friends gathered in the kitchen around food and cooking. She is passing these food traditions along to her two daughters at home but also brings the smells, warmth, and engagement to her community in an inspiring and thoughtful way.

Aaron grew up in a community-oriented household and has continued to model that commitment with her children. Promoting marketable job skills training and economic self-sufficiency has been a major focus of her adult life: ”I’ve seen lives transformed simply by gaining the skills needed to achieve employment. There is a palpable change in self-esteem and determination, once an individual can bring value to their family and their community.” This intention and framework for articulating values comes from deep and special places in the hearts of this fledgling company’s founders as they tackle goals both big and small. In a food system ridden with disconnects and misinformation, it is companies like WholeHeart that provide inspiration for consumer empowerment, awareness, and communal engagement. As Aaron said, “it never made sense to just repair our corner of the world; we need to repair the whole fabric.”

Liz Kohn, originally from Evergreen, Colorado, is a Master’s in Social Work ‘12 candidate in the University of Michigan’s Jewish Communal Leadership Program. She is particularly interested in meeting both individual needs and communal challenges related to the accessibility and affordability of fresh, healthy food and works part time at Ann Arbor’s Fair Food Network.