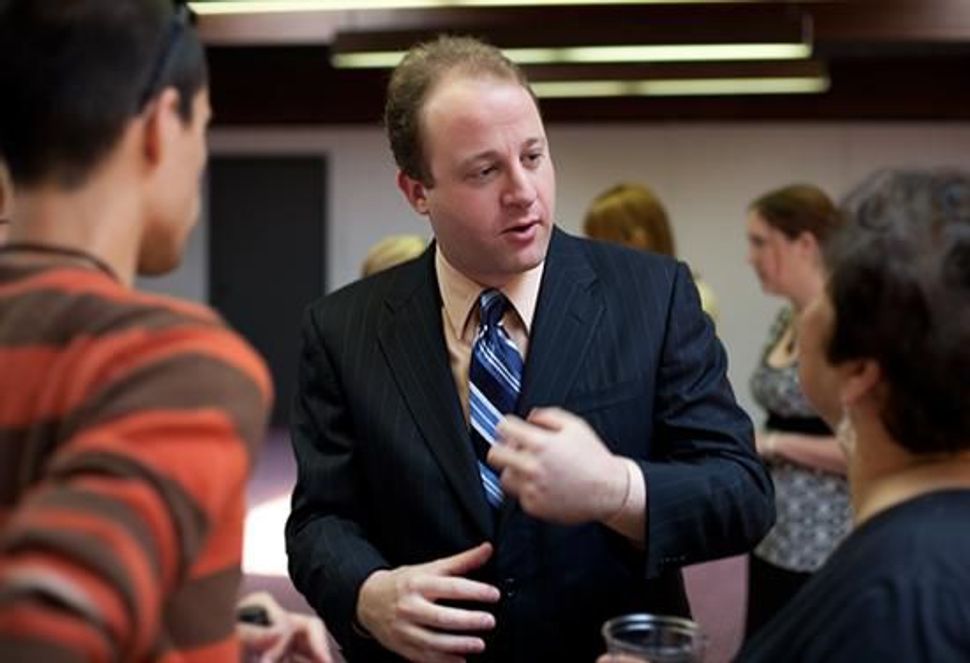 A Jew, a Muslim and a Buddhist walk into a Congressman’s office… No, it’s not a joke; it happened last week in Boulder, Colorado, at an interfaith roundtable on food and sustainability, co-hosted by Hazon.

Joining clergy from the local Modern Orthodox, Conservative and Reform Jewish communities were leaders from the local Muslim, Second Baptist, Buddhist and yoga communities, as well as the director for the Colorado chapter of Interfaith Power & Light. Twelve of us came together to share our concerns about food issues with our elected representative and two of his staff, to build relationships among ourselves, and to explore the potential for collaboration.

“It takes a diverse group to make change. An interfaith initiative speaking out on food issues is critical to giving moral authority for changes to occur at the national level,” stated Congressman Jared Polis, strongly encouraging continued convenings and collaboration. Polis, a member of local synagogue Congregation Har HaShem, is deeply concerned about food issues. He serves on the Congressional Organic Caucus and convenes a Food Advisory Task Force of local experts to keep him apprised of critical issues and how legislation can be used to effect positive change.

I am a member of that task force (we enjoy referring to ourselves as the FAT Force!). When Nigel Savage, Hazon’s founder and director, was visiting Colorado, he was able to be a guest at a FAT Force meeting. He suggested the idea of an interfaith roundtable and everyone got really excited about it. Hazon gladly offered to partner with the congressman’s staff to pull it together; we brainstormed desired outcomes, combined our contacts in the clergy community for an invitation list (we were deliberate about being as diverse as possible), we co-wrote a brief invitation, and emailed it out. And about half of our invitees were able to attend.

At our meeting, this ad hoc group of leaders explored areas of overlapping interest and concurred that GMOs, treatment of animals, hunger/starvation, and environmental sustainability are all food issues of common concern and potential areas for future partnership.

Rabbi Marc Soloway of Congregation Bonai Shalom reflected on the teaching of shikhecha from Deuteronomy 24:19-22: “When you drop or forget part of your harvest do not go back to get it,” for it is meant to be left behind for those in need. This teaching informs the Tuv Ha’aretz CSA, a project of all six Jewish congregations representing five denominations in Boulder. In their CSA (as in most CSAs in the Hazon network), if a share isn’t picked up, it is donated to a local food bank.

Professor Richard Dart of Naropa University, a school grounded in eastern philosophies of contemplative education, spoke powerfully: “We need a deep radical shift. We need to safeguard our ecosystems. We need attention, tenderness and meaningful conservation in our relationship with the earth.” Everyone nodded in agreement.

The gathering strongly reinforced to our Congressman that food issues are very important to a wide range of his constituents. While there was no specific legislation we were lobbying for or against, we know the Farm Bill will be coming up and this was a way to begin a conversation about that critical piece of legislation.

And it also reinforced the value of collaboration. We let each other know about activities and resources that we were working on independently. Activities ranged from an upcoming speakers panel on food issues and a garden and nutrition project for refugees, to someone sharing a great contact for major discounts on compostables from a local provider. There was unanimous consent that the sum is greater than its parts and that interfaith collaboration on food issues should be continued. While we have our differences, we all smiled, nodded, and recognized our commonalities when Pastor Bruce Merriweather of Second Baptist Church closed with this comment, “We must promote the wellness of the human thread.”

You don’t need strong connections with your elected representatives to coordinate something like this yourself. If you are a constituent, whether you’re working on a city, county, state or federal level, it is their job to listen to you! And Judaism would argue that it is your job to speak out on these important issues. Don’t be put off if you can only get an appointment with a staff member (which is most likely for a national official); staffers are influential and often know more about the issue than the legislator, and what you discuss will get shared with your elected representative. Plus, this is a good way to start building a relationship with their office, which can eventually lead to meetings directly with the elected official.

Becky O’Brien is Hazon’s Director of Community Engagement in Boulder, CO. She has a background in volunteer coordinating, community organizing, political advocacy, fundraising, communications and non-profit administration. Contact her at Becky.O’Brien@Hazon.org.