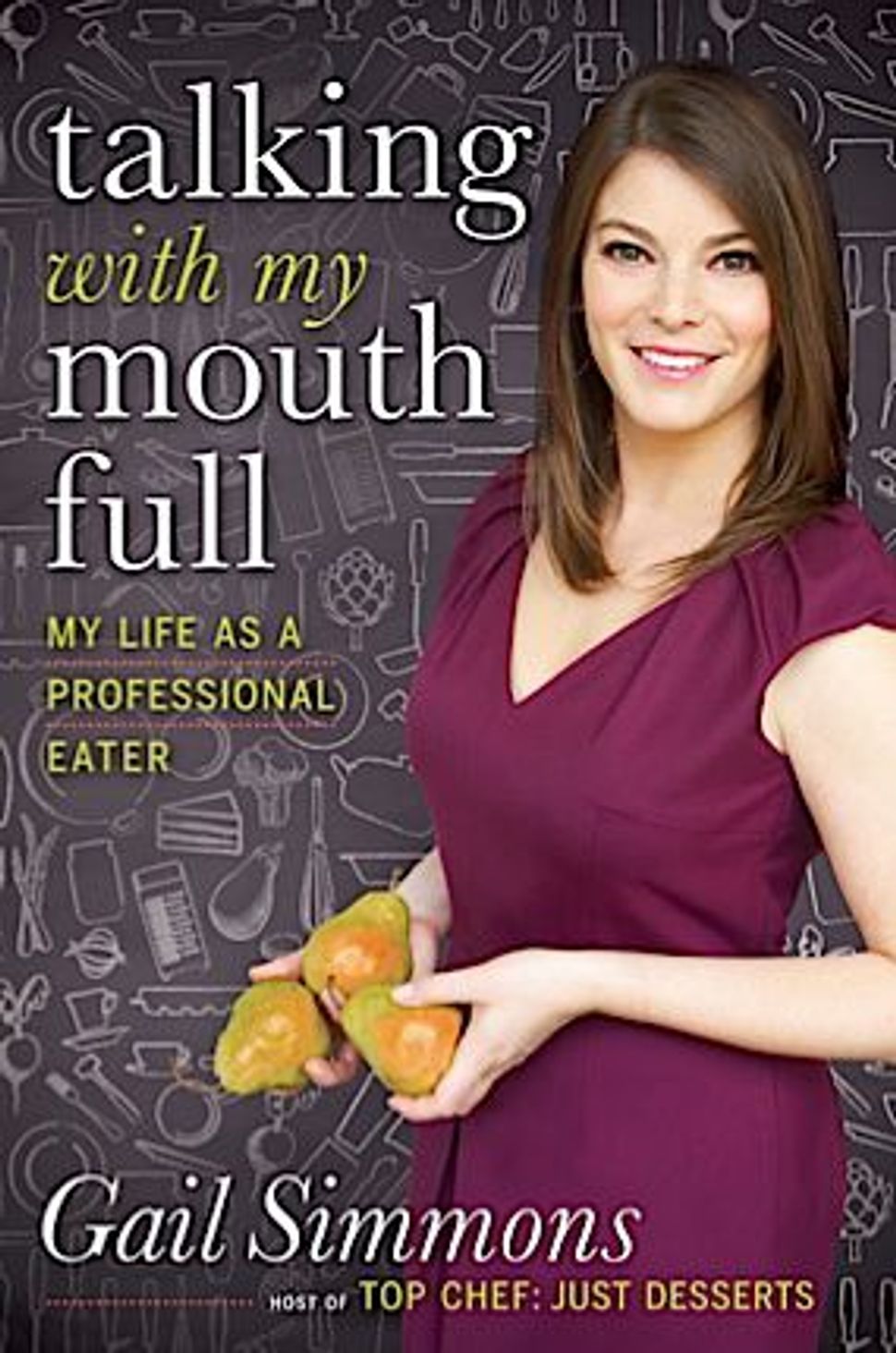 I never thought that I would yearn for Andy Cohen, the host of Bravo TV’s surprisingly popular talk show, “Watch What Happens Live,” but that’s exactly what Gail Simmons’s new memoir, “Talking With My Mouth Full,” made me do.

Simmons, a frequent judge on “Top Chef”, and the host of “Top Chef: Just Desserts,” writes in a fluid conversational style that’s easy to approach. The subtitle promises “My Life as a Professional Eater” and that’s exactly what’s here: her early internships with Canadian magazines; time in a professional kitchen; how coincidence led to a personal assistantship with the legendary Vogue food writer Jeffrey Steingarten — which led to a job for Daniel Boulud, then onto Food + Wine, the “Top Chef” franchise, and, oh yes, a wedding catered by Daniel Boulud. If you are wondering whether Daniel Boulud is an excellent caterer, he is.

Simmons comes across as charming, likable (it’s hard to remember that she was once considered the ‘mean’ judge on “Top Chef”), and, if you’re Jewish and between the ages of 26 and 40, someone you probably met once at a friend’s wedding, or on a teen tour. The experience of the book is better described as listening to a casual friend tell you about her life than it is reading a serious, culinary memoir.

The problem with the conversational tone, however, is that memoirs are monologues and not dialogues, and we only ever learn what the writer is willing to reveal unprompted. “Kitchen Confidential” confided in us and exposed everything on Anthony Bourdain’s mind. In contrast, Simmons is clearly holding back. She needs an interlocutor to push her and prod her, to get her to open up and speak more freely about her time working for and alongside some of the biggest names in food. In a way, this was clear from the title. “Talking with my mouth full” euphemistically means being rude, chutzpahdik, and speaking even when you shouldn’t. But here the phrase almost reverts to a more-literal meaning of not being able to say anything because it’s too difficult. She needs an Andy Cohen.

The book is at its best in the early chapters. Here Simmons relates her family history, childhood in Toronto, teenage misadventures, and travels across the globe — the lovelorn summer on a Kibbutz where she learned how to kill chickens and cook eggs for hundreds; and the semester in Spain when she and her friends mixed boxed wine and Fanta: “It was very wrong, yet it always hit the spot.” (Agreed.) Further, this is the conversational tone at its best: a simple, unassuming statement that elegantly captures what it means to be a young, aspiring cosmopolitan with more ambition than money.

There are still moments in these early chapters when Simmons has difficulty speaking. The discussion of her brother’s psychiatric problems is guarded even as it appears open. But the later we get in time — and the closer we get to her current employers — the more closed Simmons becomes. She gives us factual details about her jobs in the food industry, and nicely explains the mechanics of a professional kitchen and how they judge on “Top Chef”. But Simmons says little about the inner personalities of the people she works with, and gives no sense of conflict. Either these are some of the most tranquil and pacific workplaces on the planet, or Simmons is unwilling to tell us what they are really like. Consider only “Top Chef”: Have there been moments when the editing completely distorted her opinions? Have disagreements between the judges grown overheated? (How could they not?) And what of all the hosts and judges who’ve come and gone — why? The problem, again, is that in memoirs if you only have something nice to say it isn’t worth saying at all.

Talking with My Mouth Full: My Life as a Professional Eater, By Gail Simmons, $26.99