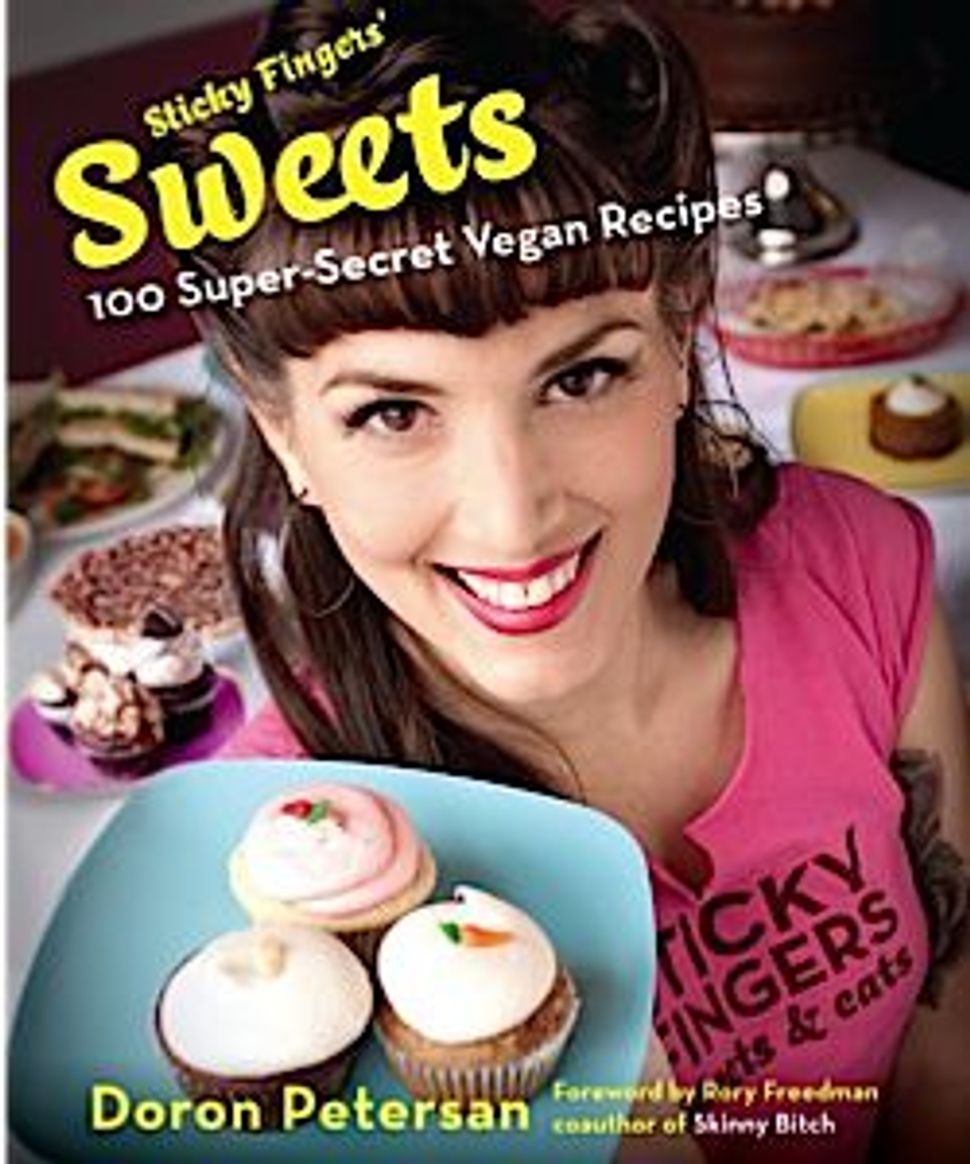 Step inside Sticky Fingers Bakery in the Columbia Heights neighborhood of Washington, D.C., and nothing seems amiss amongst the packed crowds and gleaming displays packed full with sweets like strawberry crème cupcakes, frosted sticky buns flecked with walnuts, and orange cranberry scones. That is, until you realize everything is vegan.

But, these baked goods fly off the shelves. Recently, a selection of the shop’s cupcakes even beat out traditional sweets on Food Network’s “Cupcake Wars All-Stars,” making Sticky Fingers the first vegan bakery to win the competition program. The shop’s success recently culminated in a cookbook released this month, “Sticky Fingers’ Sweets! 100 Super-Secret Vegan Recipes.”

How is all of this possible when vegan products have a reputation for being dry, crumbly, and, on the whole, less-desirable than their non-vegan counterparts?

“We’re all about baking,” explained owner Doron Petersan in a recent interview with The Jew and the Carrot. “We’re all about the science behind baking. We happen to be vegan. That’s kind of how we approach it … we try to look at everything from the angle of pastry chefs and bakers and recipe designers rather than [saying]: ‘Oh, well. It’s vegan. Let’s start there.’”

Petersan grew up in a Jewish and Italian mixed home, and her heritage features prominently in the savory foods she prepares, which range from Jewish favorites like matzo ball soup, Israeli-tinged hummus and baba ganoush to Italian flatbreads and lentil soups. “They’re all from New York, and [Italian and Jewish] is such a familiar combination for me,” Petersan waxed. “It never really dawned on me how much it played into the foods that I eat [and] the food that I cook, until I moved out of New York.”

That’s not entirely evident on Sticky Fingers’ menu, which ranges from sweet to savory. There’s an Asian-inspired wrap here, a breakfast burrito there, and a slew of sweets that defy ethnic classification. But Petersan says her Jewish grandfather may have had more to do with that than anything.

“My grandfather was an amazing cook,” she recalls. “He influenced definitely my palate and style of eating, but probably in a less Jewish specific way and more about being really open minded to flavors and great ways of combining foods.”

She recalled, years ago when she first announced her newly-adopted vegan lifestyle to her family, her grandfather was one of the most accepting of the bunch. “When I became vegan … he just made the effort to make sure that I was included in everything he was doing, and that was just such a beautiful thing.”

When Petersan decided to open a vegan bakery, her grandfather had some advice. She chuckled as she recalled his ironic choice of words. “My Jewish grandfather: ‘For Christ’s sakes, just make sure it tastes good. There’s nothing worse than bakeries that open and they try and make stuff that’s either low sugar or healthier and it just tastes like cardboard. Just don’t make it taste like cardboard. And if you do a hamantashen, don’t make it taste like every other hamantashen. You have to make it a good one.’”

Petersan plans to offer hamantashen in the store for the first time this Purim when the holiday rolls around next week. In the past, she’s offered other Jewish holiday favorites, like vegan potato latkes for Hanukkah. Beyond the holiday season, Sticky Fingers has a Jewish following: Although not a kosher certified facility, the bakery uses ingredients that are often previously certified and nothing incorporates dairy.

Sticky Fingers’ new cookbook features plenty of recipes that would appeal to kosher Jews, who have long suffered through dry, dairy-less desserts. In the book’s pages, Petersan reveals techniques for mimicking the effects of egg, achieving the airiness often absent in vegan cuisine, and most importantly, keeping things soft and moist. Our favorite recipe is one for chocolate biscotti, which as Petersan agreed, is a ringer for mandlebread.

1) Preheat the oven to 350 degrees Fahrenheit.

3) In the bowl of a stand mixer, combine the margarine, sugar, and vanilla and cream together with the paddle attachment until light and fluffy, about 3 minutes. Scrape the sides and bottom of the bowl and mix on high speed about 1 more minute.

4) In a small bowl, whisk together the water and egg replacer. Add the egg replacer to the sugar mixture and stir to combine.

5) Add the soymilk and stir until all the ingredients are incorporated.

6) In a separate bowl, whisk together the flours, cocoa powder, baking powder, and salt. Add the chocolate chips. Slowly add the dry ingredients to the wet ingredients and mix until combined.

7) Scoop the dough out onto a clean work surface and press it into a 9 by 6-inch log; place the log on the baking sheet. Bake for 15 minutes.

8) Remove from the oven and let cool until cool enough that it can be worked with.

9) Cut the log into ¾ by 6-inch pieces and lay the pieces on their sides. Bake again for 15 to 20 minutes, until the pieces are dry. Leave on the pan and set it on a wire mesh rack to cool.