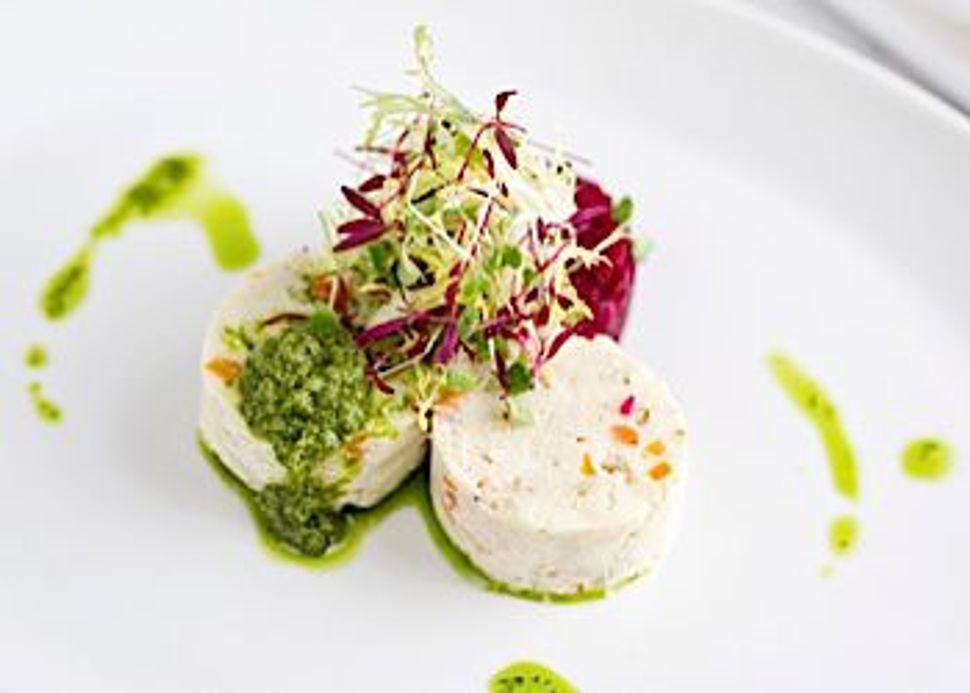 Gefilte fish gets dressed up at Kutsher?s Tribeca. Image by Evan Sung

Another perk, you won’t be limited to your aunt’s matzo ball soup or dry brisket. Here, the dishes even cross cultures — Passover tacos, anyone?

Kutsher’s Tribeca
186 Franklin St., 212-431-0606
This “modern Jewish American bistro” from the family behind the famed Catskill’s resort, is looking to give Jewish cuisine more foodie cred. Their Passover seder menu lives up to that ideal, with chopped duck and chicken liver, wild halibut gefilte fish with beet and horseradish tartare and KT braised brisket. Each table will get a seder plate, a box of Streit’s matzo and sweet onion butter.
Details: Seder menus will be available April 6 and 7. $78 per person for adults, $48 for children under 10. Reservations required.

Balaboosta
214 Mulberry St., 212-966-7366
Playing up the image of the balaboosta (rough translation from Yiddish: perfect homemaker), Israeli-born owner Einat Admony is joining forces with two other female chefs — Alex Raij of Txikito and Fany Gerson of La Newyorkina Mexican Ice and Sweets — for a second night seder with a killer menu including Gefilte Wannabe: Fish Cakes in Spicy Moroccan Tomato Sauce, Spring Lamb with Roasted Potato and Sunchoke and Orange and Pistachio Meringue Cake filled with passion fruit cream.
Details: The seder will start at 7 p.m. on April 7. $110 includes Israeli wines, but doesn’t include tax and tip.

JoeDoe
45 East 1st St, 212-780-0262
The Progressive Passover at JoeDoe is not for the straight-up traditionalist. Chef Joe Dobias learned to whip up Jewish-style foods when trying to impress his girlfriend/co-owner Jill Schulster’s Jewish family. We suspect that dishes like Jewish wedding soup (chicken meatballs, matzo balls, pickled vegetables) and slow-roasted brisket (horseradish potatoes, parsley sauce) probably did the trick. Elijah’s punch is made up of English Harbour rum, Manischewitz, lemon, soaked cherries. And for a more traditional twist: The JoeDoe seder sampler — maror, charoset, chicken liver and fried matzo.
Details: Dinners will be served on April 6,7 and 8, complete with Haggadahs, the cup for Elijah, the Passover playlist — which includes traditional and not-so-traditional Passover songs played from Schulster’s iPod, and the Afikomen. $65 per person, not including tax or tip.

James Beard House
167 W. 12th St., 212-627-2308
Joe Dobias and Jill Schulster (of JoeDoe) will also host their Progressive Passover at the Beard House. Schulster will act as mixologist, making drinks like Elijah’s punch (see above) and including wine pairings with every course. Dobias will be in charge of the food — with dishes that include gefilte fish fritters, horseradish deviled eggs, brisket jerky and persimmon-honey squab with foie gras Manischewitz demi glace.
Details: The second-night seder, on April 7, is $130 for members/$170 for the public.

Abigael’s on Broadway (Kosher)
1407 Broadway, 212-575-1407
The menu at this midtown Kosher staple is on the traditional side — with chicken soup, gefilte fish slow-roasted short ribs and chocolate truffle mousse among the offerings. Includes seder plate, matzo, sweet wine/grape juice. An extensive wine list is available for additional cost.
Details: Open throughout Passover, including communal seders at 8:30 p.m and private seders at 7 p.m. on Friday, April 6 and Saturday, April 7. Cost: $127 per person; $65 for 10 and under. The meal must be prepaid.

Prime Grill (Kosher)
60 E. 49th Street, 212-692-9292
This upscale kosher steakhouse (which caters to the Jewish and non-Jewish set during the year) is pretty traditional on Passover. The menu includes Chilean sea bass gefilte fish quenelles (which sound so much fancier than plain-old gefilte fish), pan-seared herb marinated chicken breast and prime rib roast. Haggadot, kippot, seder plates, matzo, bitter herbs and four glasses of wine round it all out.
Details: The restaurant will be open for all of Passover, excluding the last two days. First seder: Friday, April 6 at 8:30 p.m.; Second seder: Saturday, April 6 at 8:45 p.m. Group seders will be conducted by a rabbi. Private seders are also available. Cost: $139.00 per person for one seder, $219 for both, plus tax and tip. Full pre-payment is required.

Domenica
123 Baronne St., 504-648-6020
Israel-born Alon Shaya is at the helm of this John Besh-owned Italian restaurant, and his elegant twist on tradition includes matzo ball soup with duck, escarole and lemon and pomegranate-lacquered lamb shank with Moroccan spiced root vegetables. Each table will also get wood-fired matzo with Sicilian sea salt, freshly grated red and white horseradish, Sephardic charoset, and warm marinated olives with lemon and oregano.
Details: The Passover menu will be available April 6-14. $55 per person, not including tax and tip. Customers are welcome to lead their own seders.

Mon Ami Gabi
2300 N. Lincoln Park West, 773-348-8886
This French bistro (with locations around the country) is also going with tried-and-true Passover favorites like matzo ball soup, chopped liver, braised brisket of beef, potato pancakes with applesauce, and flourless chocolate cake with fruit compote. There are also take-out options for those who want to do a non-home-cooked home seder.
Details: Seders will be held on Friday and Saturday nights. $36.95 per person and $15.95 for kids 12 and under, not including tax or gratuity.

Spago
176 North Canon Dr., Beverly Hills, 310-385-0880
Those looking for a (Beverly Hills-appropriate) upscale seder meal can find it at this Wolfgang Puck eatery’s annual seder. The meal kicks off with shallot and thyme matzo and chopped liver, features braised beef short rib flanken and ends with New York cheesecake, Ovaltine bars, passionfruit pops, Passover puffs with chocolate sauce, wild berry sorbet and macaroons. There are wine pairings with each course, too.
Details: April 7 at 6 p.m. $175 per person, $80 for children under 9. Proceeds go to Mazon, The Jewish Response to Hunger. Prepayment is required.

Street
742 North Highland Ave., 323-203-0500
Susan Feniger’s L.A. vegetarian-friendly resto — which revolves around street foods from around the world — is offering a second-night seder (both a traditional and vegetarian menu are being offered). Dishes will include fava bean besara (a pureed fava bean dish popular in Middle Eastern cooking) smoked fish and potato bimueolos (a Ladino version of fritters), warm haloumi salad, Moroccan lamb or Moroccan vegetable tagine and spiced apple cake.
Details: A second seder will be offered on April 7. A brief service will begin at 6 (doors open at 5). A seder plate will be at each table, and the meal will largely be served family style. $55 per person.

Zahav
237 St. James Pl., 215-625-8800
At this upscale eatery, Israeli food is elevated above falafel. James Beard Award-winning chef Michael Solomon will offer a menu that includes salatim (salads) and hummus along with braised beef cheeks and handmade matzo; salt cod “kibbe;” brisket and coconut custard.
Details: Passover meals, from April 6-13. No seder specifically, but guests are welcome to hold their own. $45 per person.

London Grill
2301 Fairmount Ave., 215-978-4545
Co-owner (and re-enactment enthusiast) Terry Berch sets the scene for the seder by adorning the tables with ceramic frogs, colorful, scattered plastic bugs and sunglasses (to represent the plague of darkness). The menu is traditional: think gefilte fish, matzo ball soup and brisket. Matzo, charoset, and a shank bone will be available, too.
Details: Seders will take place on April 6 and 7th, but menu items — along with special Passover cocktails — will be available a la carte through April 13. $40 per person. $20 for children 11 and under.