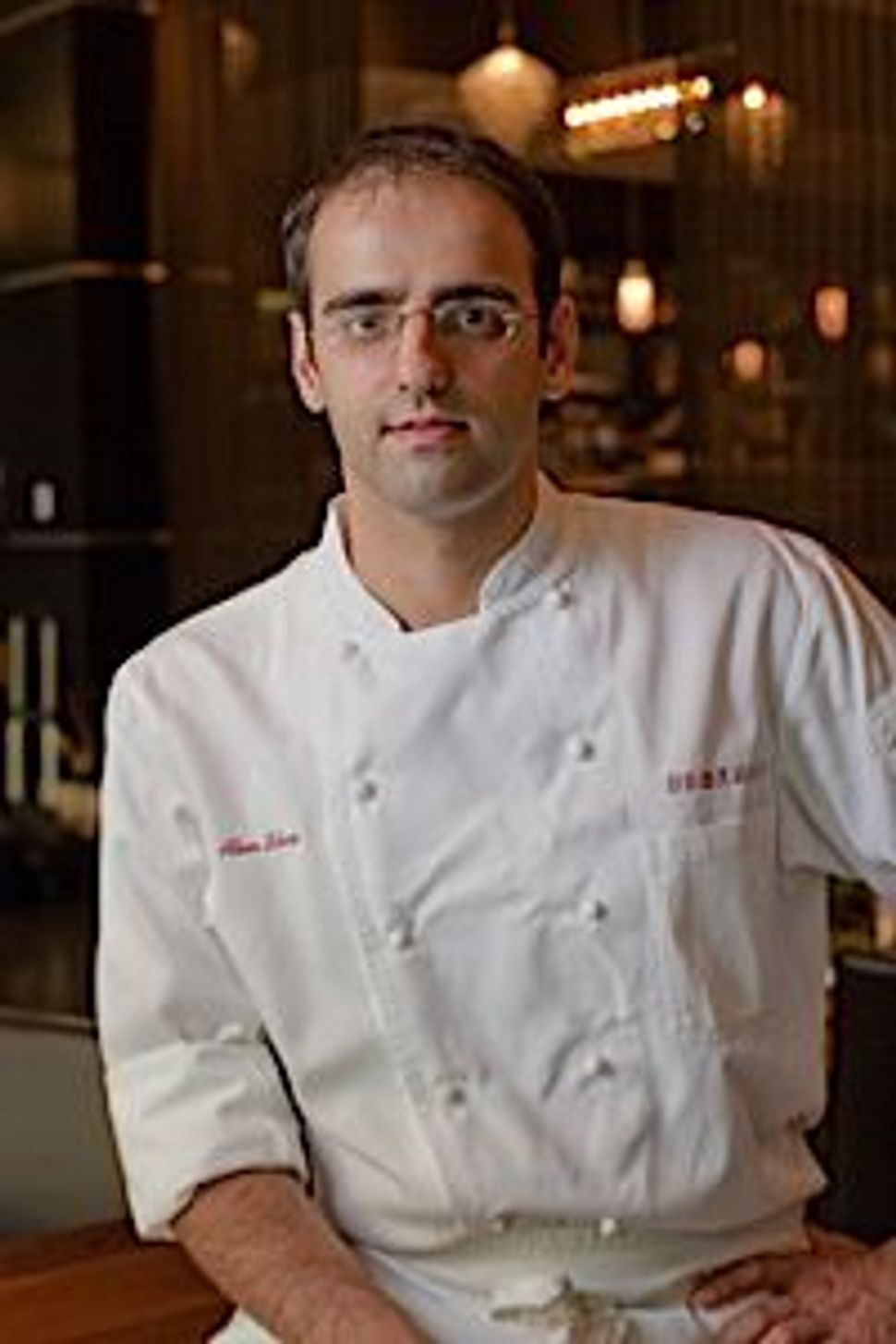 To hear chef Alon Shaya tell it, Israeli food helped get him where he is today. The acclaimed executive chef of John Besh’s Italian restaurant Domenica in New Orleans, was born in suburban Tel Aviv but moved to Philadelphia when he was just 4 years old.

The child of an Israeli mother and Romanian father, some of Shaya’s earliest memories were of coming home from school and smelling the roasting peppers his grandmother cooked on a flame. “Those are the memories that made me fall in love with food,” said Shaya, 32.

Shaya and his team at Domenica — an Italian eatery in New Orleans’ historic Roosevelt Hotel — are known for the expertly cooked pastas and upscale pizzas (he perfected the art of pizzamaking while living and working in Italy). But the chef’s Israeli influence is all over the menu, thanks to the many parallels between the cuisines. “That’s what drew me to Italian food as a kid — there’s olives and olive oils and artichokes and tomatoes and peppers. Those are things both Israelis and Italians eat at every meal.”

At lunch, Shaya serves an Israeli-style sandwich inspired by his Romanian-Israeli grandmother. It has fried eggplant with a tomato and parsley sauce. His grandmother made it with cream cheese, his has goat cheese. Shaya also serves a cauliflower sandwich with yogurt and mint that is “very Israeli.”

“I incorporate a lot of traditional food into the menu without thinking traditionally,” he said.

Shaya thinks a bit more traditionally when he’s cooking for the holidays at Domenica, which he’s done for two years. This past Hanukah he made latkes with three sides — goat cheese mousse, apple and walnut marmellata and pomegranate and chicory salad. On Rosh Hashana he cooked a veal brisket with root vegetables and apples. He also served apple and honey cakes for dessert, along with an apple and honey cocktail drizzled with walnut oil.

But some of his most popular meals at Domenica have been seders. His Passover tasting menu is always a hit. “People thank me for providing a place to go have Passover where they don’t have to do dishes afterward. It really touches me. People came from all over last year. There were a lot of people whose children had just started at [nearby] Tulane and Loyola; and they came with their kids to have their first Passover away from home.”

At the Domenica seder this year, he served matzo (cooked in the wood-burning pizza oven), Sephardic haroset (his mother’s recipe), an Italian riff on matzo ball soup (see recipe below), a Roman fried artichoke (popular in the Jewish quarter of Rome), a roasted goat (served shakshuka-style, with tomatoes and eggs), and matzo meal beignets with lemon curd for dessert. “It’s definitely not what you would get at any other Passover seder,” he said. While the meal wasn’t kosher, he didn’t use any flour, or mix milk or meat. He substituted olive oil for butter in both the savory and dessert dishes — a trick he learned from Venice’s kosher bakeries.

Growing up in a traditional home, Shaya learned a thing or two about kashrut. “My mother is religious, so we observed Shabbat and the holidays. I was the one who had to kasher the kitchen for Passover and bring the dishes up from the basement — that was the worst thing,” he said. On a brighter note, she taught him to make sufganiyot for Hannukah and hamantaschen for Purim.

Though Shaya has fond memories of his childhood in Pennsylvania, he’s adopted New Orleans as his new home and has been welcomed into the Jewish community there. “It’s not very big, but the community is strong and the people are really great. They have opened up their homes to me,” he said.

Despite — and perhaps because of — the difficulties New Orleans has faced, he plans on staying in his adopted home.

“I love it here — the city’s been very good to me. Every time something like a hurricane or oil spill happens, I feel more connected to the city. It makes me feel needed.”

Shaya even appeared in the New Orleans-based “Treme” on HBO — as a New York line cook who was constantly being berated by his boss.

In reality, Shaya has a good relationship with his boss and partner, famed New Orleans restaurateur John Besh. Before becoming co-owner of Domenica, Shaya worked with Besh at Besh Steak, from 2003-2007.

As far as what the future holds, Shaya said he’d consider opening an Israeli restaurant down the line. And he already knows whom he’d like to emulate. “I think what Michael Solomonov is doing with Zahav is amazing — bringing modern Israeli food to the mainstream in America, telling people it’s not just falafel. I think if I ever did something like that, I’d look to him for inspiration,” he said.

*Shaya’s given the traditional matzo ball soup an Italian twist. The result is a modern take on the classic Italian wedding soup, which usually consists of escarole, beans and meatballs in a clear broth.

1) Remove excess fat from chicken. Rinse chicken under cold running water and place in a large pot. Cover the chicken with cold water and over a low flame, slowly bring to a simmer. As it simmers, skim off all the foam and fat as it rises to the top. Cook for 45 minutes on a low simmer.

3) Pull out chicken and let cool. Remove all the meat from the chicken and save for another use. It makes a great chicken salad for lunch the next day.

4) Add the matzo balls (recipe below) to the broth and let cook slowly for 45 minutes. At this point, you can hold the soup warm, until you are ready to serve. When ready to serve, add the cannellini beans, escarole, tomatoes and cook for a few minutes until all ingredients are hot.

For the Matzo balls

1) Mix the matzo meal with the salt, onion powder and garlic powder.

2) Warm the duck fat until it becomes liquid, but not hot. Add the eggs and duck fat to the other ingredients. Mix until evenly incorporated. Let mixture rest in the refrigerator for 1 hour prior to rolling.

3) Roll into one ounce balls and carefully place in the simmering chicken broth to cook. Cook for 45 minutes on low heat.