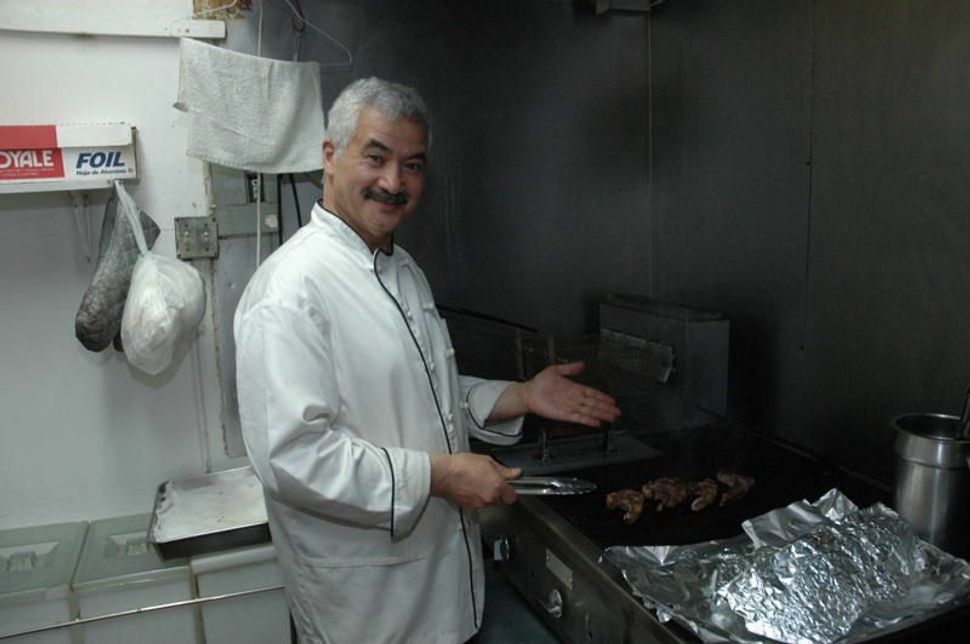 Mention seder to chef Simon Elmaleh and his peaked eyebrows lift, his graying moustache twitches and his eyes dance.

“When I was growing up in Casablanca, Passover was a really big holiday for us,” he said. “My mom would go to the market and buy lamb, chicken, vegetables and, of course, dried fruits for a really huge meal.”

The centerpiece of the seder would be a lamb tagine — a stew cooked slowly to fall-off-the-bone tenderness over low heat in a special clay pot, also called a tagine. The pot — a shallow, round base covered by an open funnel-or dome-shaped lid — allows steam to rise, cool and condense. The flavorful juices flow back into the stew.

“My mom would do things the way they really should be done,” said Elmaleh. “For example to make a cold Moroccan salad, she would grill an eggplant or a red pepper slowly over an open fire first. If you don’t, you don’t get that smoky flavor. When you grill them, the skin comes off. Then you can chop them and mix them with tomatoes.

“It’s not that I haven’t tried the short cuts,” he said with a smile. “But I come back to what she taught me.”

Elmaleh’s family originally came to Casablanca from Spain after the Jews were expelled in 1492. The neighborhood he grew up in was a mixture of Jewish and Muslim families.

“When we had holidays, they would come and congratulate us. When they had a holiday, we used to go to them and say, ‘Hey, happy Eid Al-Fitr (end of Ramadan)’ or whatever.”

Relations between Muslims and Jews chilled in 1956 after Egypt lost Sinai to Israel. Six years later, Elmaleh’s family immigrated to Ashkelon, Israel. Because he could speak French, he was hired to work with a French chef at a Club Med in Israel. He then went to work for a cruise line, working his way up to run the catering department.

In 1983, he was offered an opportunity to open a restaurant in Kobe, Japan. He and his wife, Haruyo (Aviva), came to Los Angeles in 2000 and opened another Moroccan restaurant, Simon’s Café, now located in Sherman Oaks.

During Elmaleh’s time in Kobe, he was active in the leadership of the Jewish community, including serving three years as president. He was called on to plan several community seders. The key to a good seder for a community or large group, according to Elmaleh, is planning.

“It’s about food and menu, timing and organizing large scale food preparations in a small kitchen,” he said. “You have to decide what size portion should be served for each dish. How many people are coming? How much food will be needed? Everything has to be calculated in advance. You can’t make the whole meal in one day.”

Ultimately, Elmaleh said the important thing is not to become so enslaved by preparations that you lose sight of the meaning of the holiday.

“I think Passover is about tradition. It connects you to your family, to your community and to your memories and you feel good with that.”

Cut the lamb into one- or half-inch cubes. Season with salt and pepper. Sprinkle the meat with matzoh meal and sauté in a hot frying pan until golden brown. Put the lamb into a tagine or a pot that can go into the oven. Saute the onion until it is golden and put on top of the pot. Add the dried fruit, stock and cinnamon. Let the pot come to a boil on the stove. Then cook in the oven for about three hours at 350 degrees.

Serve with the chopped parsley and roasted sesame seeds sprinkled over the tagine.