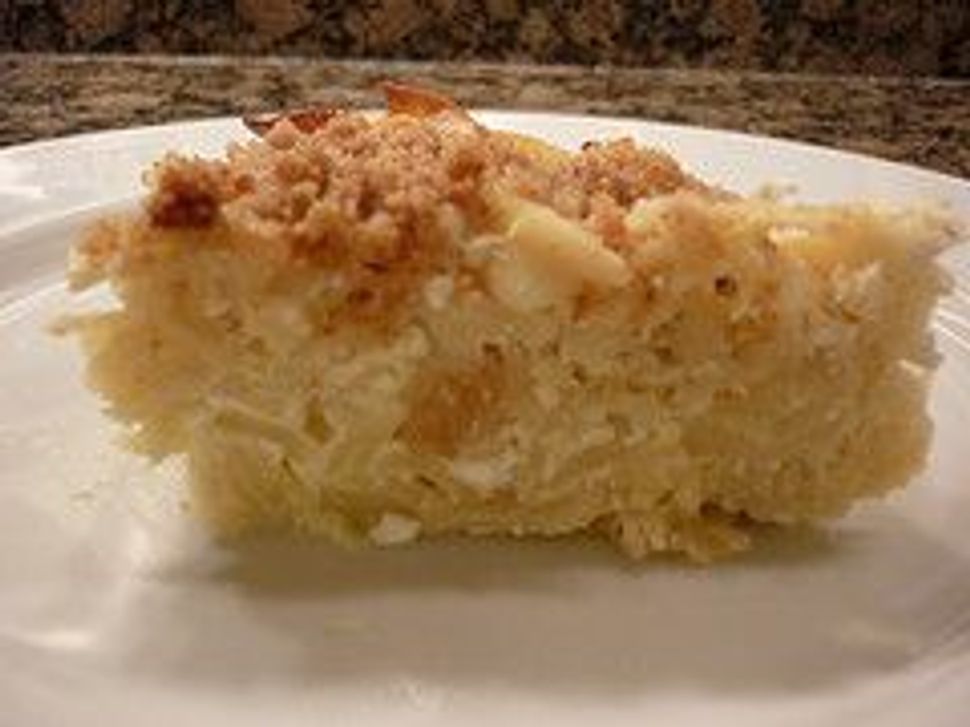 Chicken soup dripping in schmaltz, sweet noodle kugel swimming in cream and butter and sprinkled with brown sugar, potato pancakes fried in oil, with that deep fried odor that permeates the house for days (can’t you just smell them right now?), beef brisket made any number of ways. I imagine many of us have a special family recipe handed down to us, for any or all of these and other traditional Jewish food dishes that are typically served during any holiday. Even if we don’t have a stained or yellowed recipe card, we have searched the web for someone else’s traditional recipe.

It wasn’t until I became a nutrition student that I began giving thought to the nutritional value (or lack thereof?) of our cherished recipes. But then again, what’s the point? If these traditional foods are only eaten three or four times a year, why not enjoy the calories, fat, carbohydrates and sugar that they so richly provide? We all need a diet “cheat” day once in a while, right? Well, right for some, but for those with metabolic diseases such as diabetes, cardiovascular disease, hypertension, or obesity who are trying to improve symptoms, unhealthy changes to their (hopefully) healthy lifestyle can be dangerous. For example, an insulin dependent diabetic works diligently each day by monitoring blood glucose levels and adjusting their diet appropriately. Even one time, eating “cheat” foods can lead to spikes in blood sugar and serious consequences such as imbalances that may be difficult to restore, leading to other problems.

One of my current classes is entitled “Food & Culture.” It is an interesting course that details traditional food habits, food staples, nutritional intake and special occasion foods from cultures throughout the world. The purpose of the course is to learn how, as a dietician, to be able to effectively counsel immigrants and their families who have very specialized beliefs around food and health. Early on in the course, a chapter about food and religion covered the three major monotheistic religions: Judaism, Islam and Christianity (among others). We were asked to discuss whether or not our religious or spiritual views affected our views on “over-and under-eating,” meaning alternating indulging and retraint. What a great question for a Jewish girl to answer! As a second generation Jewish American whose parents were born during the depression, living currently as a Reconstructionist Jew in Evergreen, Colorado, there are a couple of ways that I would answer this question.

I can easily justify overeating among my parents’ generation; they were depression-era babies who grew up during a time when food was scarce. One of the darkest periods in Jewish history followed the depression years, and it’s difficult to argue why some of that generation have chosen to indulge in today’s blessings of abundance. On the other hand, as someone who is passionate about nutrition for health and longevity, I can also argue that our religion/culture/upbringing have led to appalling eating habits responsible for today’s increase in chronic diseases such as diabetes, heart disease and hypertension. Our mothers and grandmothers urged us to “eat, eat, you’re too thin.” If there wasn’t meat on the table, it wasn’t a meal.

So what’s the solution to honoring cherished family recipes without the guilt of forgoing our healthy habits? Eating healthy takes work, especially if we weren’t raised to eat this way. One web site that I was pleasantly surprised existed is geared towards Jews with diabetes; it is the Jewish Diabetes Association. For anyone with diabetes, or for those of us who want to continue our healthy habits even during a Jewish holiday such as Pesach, whose traditional foods can be loaded with fat, calories and sugar (but don’t have to be!), this is a source of information that you want to refer back to frequently. The web site even gives information on how to eyeball serving sizes when you’re unable to weigh them. For example, a 3-ounce cut of meat is similar to a deck of cards. Portion control, carbohydrate balance and calorie counting is critical for those with diabetes, but time honored traditions such as Bubbe’s recipe shouldn’t have to be eliminated on special occasions.

I’m excited to help plan and attedn the Rocky Mountain Jewish Food Summit on April 29 at CU Boulder and plan to participate in the presentation: “Adapting Bubbe’s Recipes to Meet Your Dietary Needs.” At this session, you’ll learn how to honor those age-old recipes, without the guilt on the side. Hope to see you there!

Susie Speer is a nutrition student living in Evergreen, Colorado. She is on the planning committee of the Rocky Mountain Jewish Food Summit.