Stir, Pour, Not Much More: Cooking with Noah 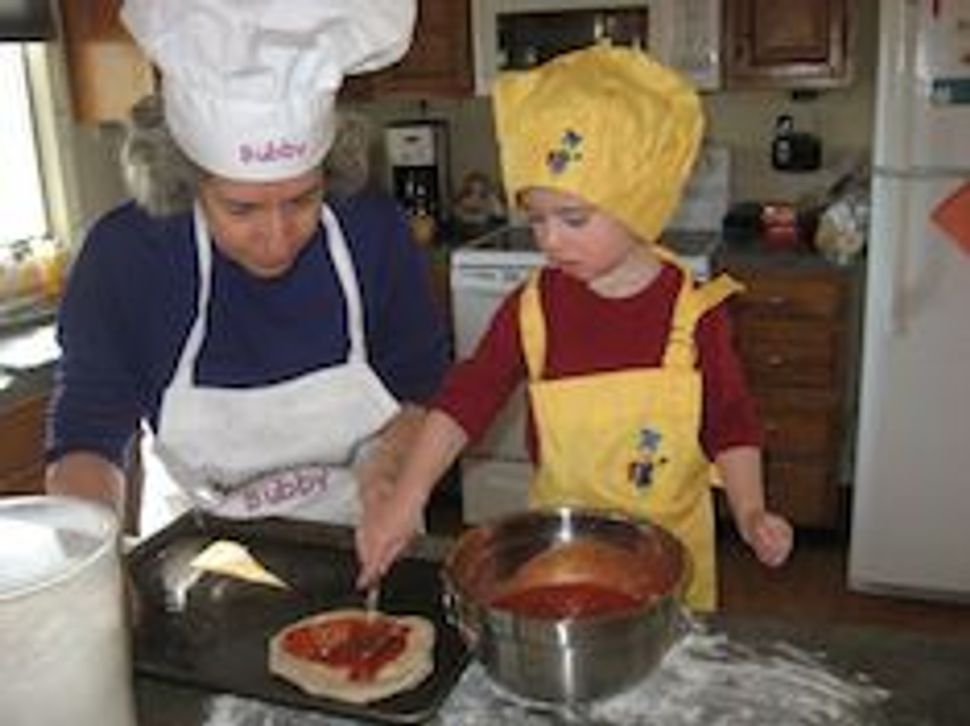 Image by Photo by Judith Belasco

My sous chef tosses the salad and some of it ends up on the floor. He sticks his hand into the bowl, picks out his favorite ingredients and eats them. He takes a bite of a carrot, declares it “too hard” and returns the teeth-marked carrot to the bowl.

Despite the mess, I think he does a wonderful job. Of course I do: my sous chef is two-years-old. He’s my son Noah.

There is clearly something special and important that happens when we take the time to pause from our busy lives and sit down together to share a meal. But what about the time prior to the meal, when the food is actually being prepared?

While parallel studies have not been done about the impact of cooking with your children, in my gut, I know that not only will inviting my son into the kitchen increase the likelihood of our home being a calmer, less stressful environment, but is also a foundation for our shared-understanding of what it means to live in a Jewish home.

After the destruction of the Temple, the rabbis declared the home to be a mikdah m’at “small sanctuary” that brings our Jewish life from the communal space into the private, family space. Even though we have mezuzahs on our doorways and various Judaica and Jewish books around the house, it is when my son is in the kitchen that I know he is in our Jewish home.

The welcoming of Shabbat into our home doesn’t start when we light the candles, but rather when my son and I first mix flour and water together to create dough for challah. Somehow his dough still rises after the extensive poking and squeezing, rather than kneading, and still tastes delicious even if the braids are more like blobs. It takes longer and is certainly messier, but the Shabbat dinner table — or Tuesday night dinner table for that matter — is transformed when we sit down to food that Noah’s hands were also a part of creating.

All of this is hard. It takes patience and sometimes ends in tears (either his or mine). Both my husband and I work outside of the home. While I have read all the tips and short cuts for how to get dinner on the table seven nights a week, it often doesn’t include children’s participation. So, I make up and modify ways for Noah to be my sous chef as he becomes an ever more capable kid. If a pot of water needs to be filled, Noah will stand by dutifully with the pot top waiting for the exciting moment to put it on before it goes on the stove, which is still very much off limits for him. Ingredients that I used to eyeball when I put them into a dish are now put into small bowls so he can mix them before they go into the dish. Bananas were never so well mashed before I had Noah to mash them up for banana bread. I no longer read recipes for what ingredients I might have (or not have) on hand, or for how complex they are, but rather for ways I can include Noah in the process of cooking. And it is not just my proverbial apron strings that he is growing up with. His Bubbe does a masterful job of preparing homemade tomato sauce, stir frying mushrooms, grating cheese, and diving dough into small, individual pizza sizes so that after Noah’s nap, he is able to, together with his Bubbe, stir, mix, scoop, and shmeer to make pizza of which I have never tasted finer (see photo).

If you cook with your toddler — share your secrets about how you make it work!

Judith Belasco is the Director of Programs at Hazon, where she guides all of Hazon’s Food Programs and the expansion of our food work.

Stir, Pour, Not Much More: Cooking with Noah