Cook-Off: The Best Kugel in the West 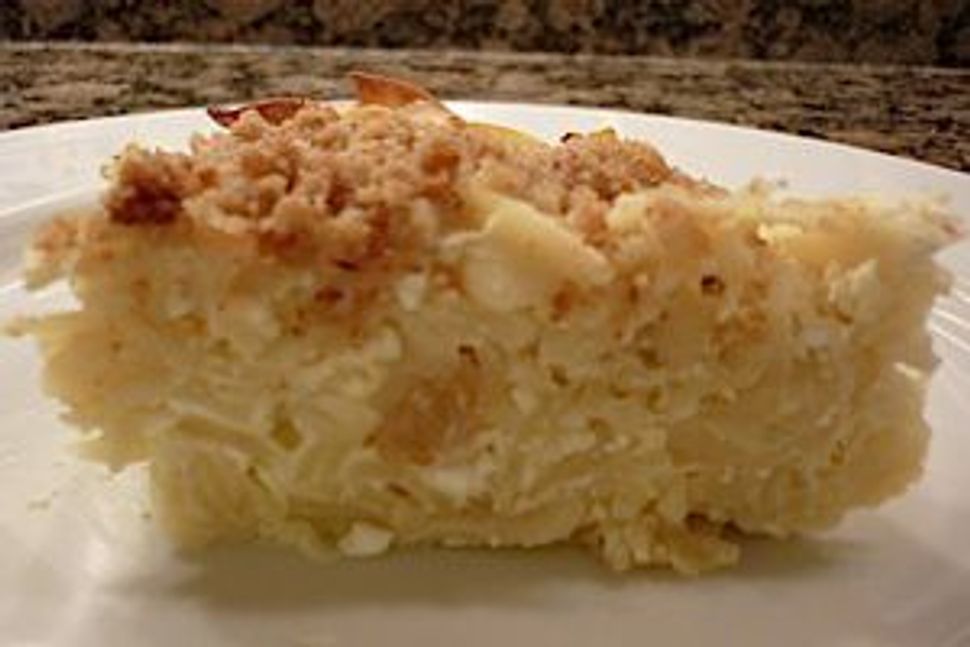 A mom in St. Louis had a say in the results of Hazon Colorado’s Best of the West Kugel contest. Nancy Green’s daughter, Hannah Green, a student at the University of Denver, was attending the Rocky Mountain Jewish Food Summit in Boulder on Sunday. And Hannah was so excited about being a kugel judge that she texted her mother — who quickly texted back what Hannah should look for. Nancy wrote that the “qualities of a good kugel” include moistness, holding together somewhat (but not too much), and good flavor and texture.

Taking her mom’s advice to heart, Hannah even re-tasted entries and changed some of her ratings. When the ratings of all 13 judges, chosen at random, were tallied, first place went to Sara Rachlin in the Sweet division, while Lindsay Gardner won top spot in the Savory category with a three cheese and spinach kugel. Shari Goldstein took the Sweet second place, and Benjamin Stuhl was second in Savory, with all four taking home prizes.

The winner of the Sweet division, Sara Rachlin, said she couldn’t wait to call her Grandma Pearl in Tarrytown, N.Y., to tell her the good news: the recipe she had entered was her grandma’s recipe, one Sara fondly remembers from childhood. Lindsay said she experimented with “all sorts of kugels” for weeks, using her family as tasters, before she settled on her winner, a spinach-rich adaptation of Joan Nathan’s classic recipe.

1) Cook noodles according to package directions. Drain and toss with 1 tablesoon butter.

2) Saute onions in 1 tablesoon of butter until transparent and soft, approximately 5 minutes.

3) Either defrost spinach and squeeze dry, or cook in a small skillet until liquid has evaporated.

5) Add 1 tablespoon canola or other vegetable oil to a 2-quart baking dish. Oil the bottom and sides of the dish well. Pour noodle mixture into dish and flatten top. Grate fresh nutmeg on top.

6) Cover with aluminum foil and bake in a preheated 375 degree oven for 40 minutes.

7) Remove foil and continue to bake for another 20 minutes or until the top and edges are crusty.

Kugel may be served hot or at room temperature.

1) Cook noodles according to package instructions. Drain and rinse.

2) Combine all other ingredients in the warm pot in which the noodles were cooked. Stir until mixed together. Pour noodles back into pot and stir well. Pour into greased 9×13” baking dish. Sprinkle Corn Flakes over top and dot with additional butter.

Now a freelance editor in Denver, Lorrie Guttman is the former food editor of the Tallahassee Democrat.

Cook-Off: The Best Kugel in the West