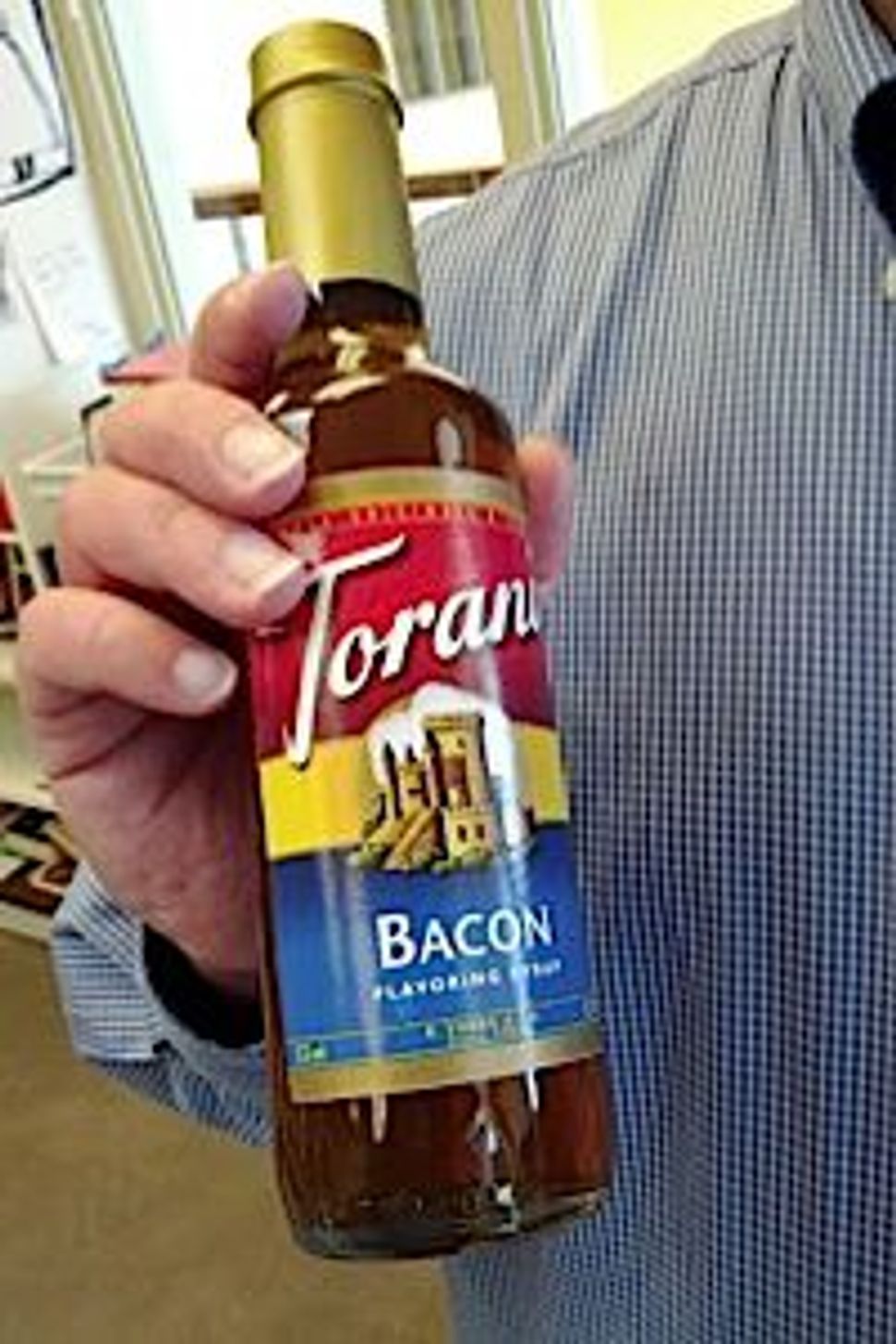 Image by Courtesy of Menachem Creditor

It’s thanks to one rabbi that The Jew and the Carrot discovered kosher bacon syrup, and thanks to another that it even exists.

On Tuesday, Rabbi Menachem Creditor of Congregation Netivot Shalom in Berkeley, California posted a photo on Facebook of his hand holding a bottle of Torani brand “Bacon Flavoring Syrup.” His comment on the photo was: “This is hekhshered bacon-flavored syrup. Not sure where to begin.”

Creditor may not be sure where to begin, but the product itself began in the spring of 2010. According to Andrea Ramirez, Torani’s customer marketing manager, the company which makes flavored syrups decided to create a single run of bacon-flavored syrup just for fun because “bacon was really happening at the time.” Inspired by cutting edge bartenders who were “fat washing”(mixing dark spirits like bourbon with rendered bacon fat, freezing the mixture, and then straining out the liquor once the bacon flavor had been transferred to it) to make bacon-flavored cocktails, Ramirez said Torani asked a number of the flavor houses they work with for bacon flavor samples and eventually settled on the one that “worked across a lot of things.”

Torani, a San Francisco-based family-run business that sells internationally, didn’t even think of getting kosher certification for the bacon-flavored syrup originally. Aside from the fact that kosher bacon syrup sounded oxymoronic, the company truly planned to do the single novelty run and be done with the product.

But on the day of production, Rabbi Don Yoel Levy of Digital Kosher who certifies the plants kosher syrups, was ironically on site. “He thought it was just hysterical, and it was his idea to give it kosher certification. He wasn’t going to pass up the chance to finally be able to taste bacon,” Ramirez recounted humorously. Surprisingly, there was no difficulty in the rabbi’s giving the hekhsher, as all Torani syrups — including the bacon one — are vegetarian and almost all are kosher. There’s smoked soy and wheat in the bacon syrup, but no meat.

“The bacon-flavored syrup has really taken off both in retail and in our online business,” It’s been used in fast food chain Jack in the Box’s bacon milkshake, and has also been used to flavor coffee, hot chocolate, chocolate milk and mochas. But Ramirez personally thinks its “salty, hearty, smoky flavor” is best for mixing into starchy foods like grits and mashed potatoes. “It’s also used in a vinaigrette for spinach salad,” Ramirez noted.

Hekhsher not withstanding, Creditor told The Jew and the Carrot that, although he put the bacon syrup on his Facebook page, he has no intention of putting it in his mouth. “I wouldn’t taste it if you paid me,” he wrote in an email. “Capitalism and kashrut make strange bedfellows.”