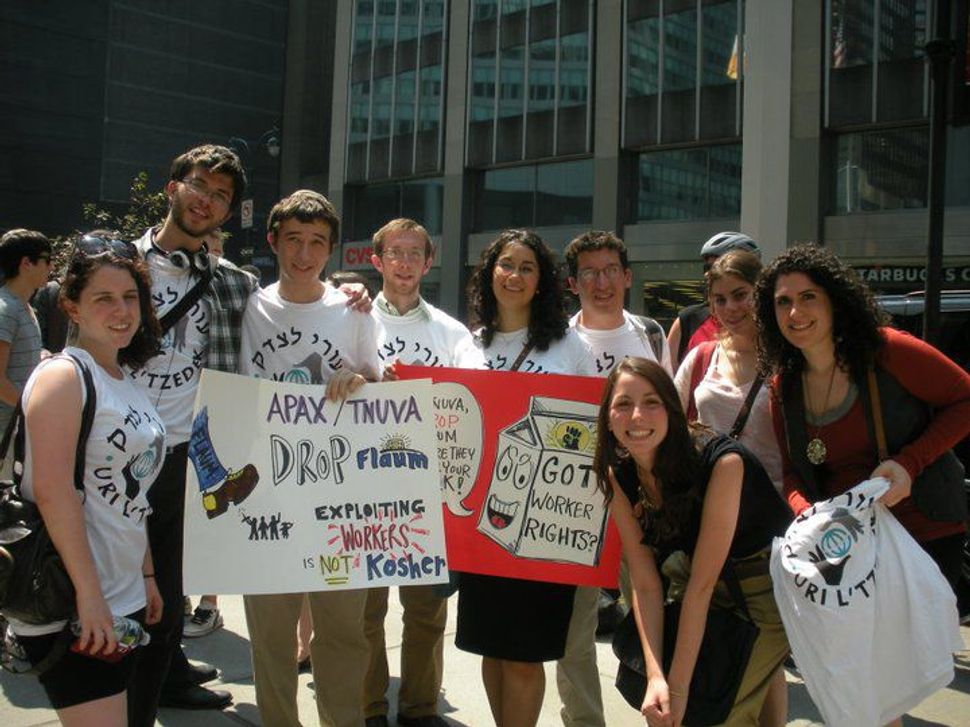 The victory comes after a long campaign fought by the workers’ group, Focus on the Food Chain, in partnership with Orthodox social justice organization, Uri L’Tzedek: The Orthodox Social Justice Movement. The campaign and its unlikely partnership spanned from street corners to corporate headquarters, college campuses to houses of worship across the United States. The campaign ultimately convinced 120 grocery stores, multinational corporations, spiritual leaders, and thousands of consumers to support the Flaums workers in their quest for justice.

Workers were subjected to wage theft including a failure to pay overtime and at times the minimum wage, for grueling work weeks as long as 80 hours. Workers from Latin America faced discrimination and abuse including anti-immigrant insults from senior management. When workers demanded payment in accordance with the law, 17 were illegally fired. Flaums lost a National Labor Relations Board trial and multiple appeals, but was still resisting compliance. This global settlement resolves both the NLRB retaliation litigation and a federal lawsuit over unpaid minimum wage and overtime.

Rabbis and Jewish activists, led by Uri L’Tzedek, working in deep partnership with the workers of Flaums, were able to raise communal consciousness, garner the support of dozens of grocery stores and food companies, direct media attention to the cause of the workers, and ultimately broker a settlement between the owners of Flaums and the workers.

Uri L’Tzedek has waged high-profile campaigns before, most notably around the Agriprocessors scandal, which was highly covered by this blog and the Forward (read posts here and here). Since then, the organization has focused its social justice work on a number of different issues, not all of them food-related, including publishing a number of justice-themed essay collections for the Jewish holidays, micro-lending, and teaching on issues from child abuse to hydrofracking. However, as co-founder Rabbi Ari Hart explained, “The food issues have special resonance in the Jewish community.” Their food-related work, particularly with the Tav HaYosher (an ethical seal awarded to kosher restaurants and catering companies who abide by state labor law and respect the pay, time, and dignity of its workers) and the Flaums campaign have struck a chord in the Jewish community. Why? Hart finds that food issues are universal, and grounded in Jewish tradition: “People from every sector of Jewish life care about how our food gets from the farm to our plates. Food consciousness in Judaism is as old as the Torah itself. We view ourselves, and the whole Jewish food movement, as a link in that chain.”

Speaking about the Flaums case, Hart continued: “This is a triple victory — a victory for the workers who have finally achieved justice after a long, hard struggle, a victory for Jewish activism and its potential to create real, tangible change, and a victory for Flaums for stepping up, doing the right thing and emerging a better company. I look forward to once again eating Sonny and Joe’s hummus at my Shabbat table, and I encourage businesses and consumers to support Flaums.”

Dasi Fruchter, a leading college activist from the Uri L’Tzedek side, organized hundreds of kosher consumers around the cause. “As a basic element of the human experience, there are many connections between food and power, and as a result, many injustices have coalesced around its production. As a community who sees their relationship to food as sacred, we have a unique responsibility to make sure that what feeds and sustains us is not perpetuating these wrongs.”

The Flaums campaign is part of a larger Jewish food justice movement. Uri L’Tzedek recently celebrated its 100th awarding of the Tav HaYosher. Thousands of consumers across North America have supported this effort, seeking to positively reinforce businesses with a commitment to just labor practices. What’s next for this growing organization? Hart says “We’ve got a few things on the burner, but one big one is a really exciting campaign to help raise the minimum wage for food workers and other service workers in New York State. The Tav also continues to grow and we’re focusing on strengthening it in cities like LA, Chicago, and more.”

Anna Hanau is the Associate Director of Food Programs at Hazon.