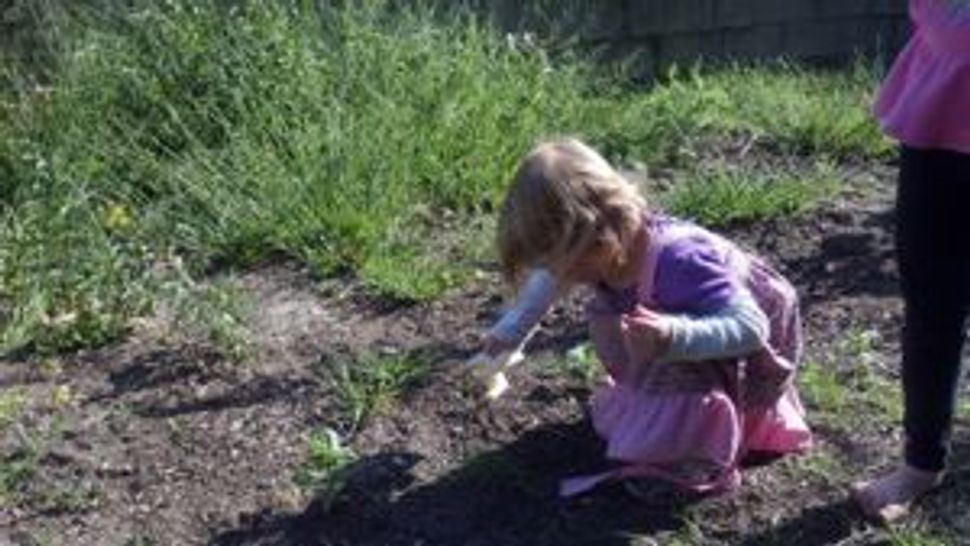 I’m counting the Omer and reflecting on my garden this year: What has been accomplished, and what remains unfinished? (the metaphors abound).

The winter here in southern California is enviable to gardeners everywhere. We can plant in December what others can only begin to plant — if they’re lucky — now. Lettuces, chards, carrots and beets, and peas to name a few. By now, early May, I can start to put in summer’s heavy hitters; tomato seedlings, sweet corn, cucumbers and green beans from seed. Nature makes it easy to garden here the year round, if you can keep yourself motivated.

Last summer, the rows of corn I’d sown in the spring towered over the rest of an abundant garden, and gave us more ears than we knew what to do with. We steamed, grilled, roasted, and gave it away. I sent my five year old out to the garden before dinner to pull off a few ears and she quickly learned to sit on the back stoop and shuck them, as expertly as any farm-raised kid. We had tomatoes and tomatoes and tomatoes, summer squash, okra, zinnias and cosmos for the butterflies and for cutting, cucumbers and Japanese eggplants, Hungarian and Thai peppers and so much butternut squash we had enough to eat through November.

In the fall, we tore out the corn stalks, the tomato and squash vines, all into the compost bin. I felt good, righteous, even. We had a working garden now, and my kids knew that tomatoes came from plants. They know why we say “borei pri ha’adumah” creator of the fruit of the earth as a blessing before eating veggies (and some fruit) and not borei pri ha’aisle five.

This was one of the biggest reasons for having a garden, the kids. For the knowledge and the joy of it. I love the way fresh produce tastes in season, but honestly, it would be simpler to go to any one of the weekly farmer’s markets with my daughters in tow, the promise of a Moonbounce ride at the end of our veggie shopping excursion. But my girls wouldn’t know about ladybugs, and flowers that attract dragonflies and butterflies in their own backyard. They might not know that bees are good, dirt smells great, and they are nothing to be afraid of.

But I’m looking out at my garden right now, and it’s not what I hoped it would be. Because we never experience a frost the gardening doesn’t need to stop for the winter. Cool season crops are sown along side the summer veggies giving you their last effort of fruit. I could’ve been harvesting Brussels sprouts and potatoes through the spring, had I put them in last winter. But I didn’t. It was my oldest kid’s first year of kindergarten. My two year old is age appropriately rambunctious and as destructive as any pest in the garden. There have been Shabbat meals to plan, lunches to pack, playdates, holidays, then another set of holidays. The garden I began in order to enhance my family’s life gets harder to maintain because I have a family.

The Bermuda grass inches further and further into the boundaries of the tilled soil, and an unknown geranium-like plant is spreading from the far corner towards what little I do have planted and growing. A bit of leaf lettuce, some purple top turnips. Sometimes I take naps during the day, while my youngest daughter does the same. I should get out to the garden, but I am waiting for inspiration to strike.

I’m thinking about this now, as we count the Omer, each day closer to Shavuot, hoping to find that motivation. A paper fruit basket hangs on my dining room wall, a project from my daughter’s class last year. In Hebrew it reads “Chag Habikurrim”, the holiday of first fruits, the early wheat harvest brought to the Temple. The Jewish calendar of holidays and observances, our prayers and petitions, call forth images of a people tied to sowing the land, relying on the grace of a good season and offering our gratitude.

I think having a garden ties me to that, or better put, reminds me that I am already tied to that in everything I do. Gardening isn’t the same as living the vagaries of an agricultural life. If giant grasshoppers make a meal of my tomato plants, I am much aggrieved, but not one step closer to famine. But life has ups and downs aplenty. My garden reminds me that I have control over very little in life beyond my, hopefully, thoughtful actions. You put in the effort, trust, and are filled with gratitude for the harvest. And while we won’t have any wheat by the time Shavuot arrives, if I hurry out to the garden, I might have a zucchini blossom or two by then.