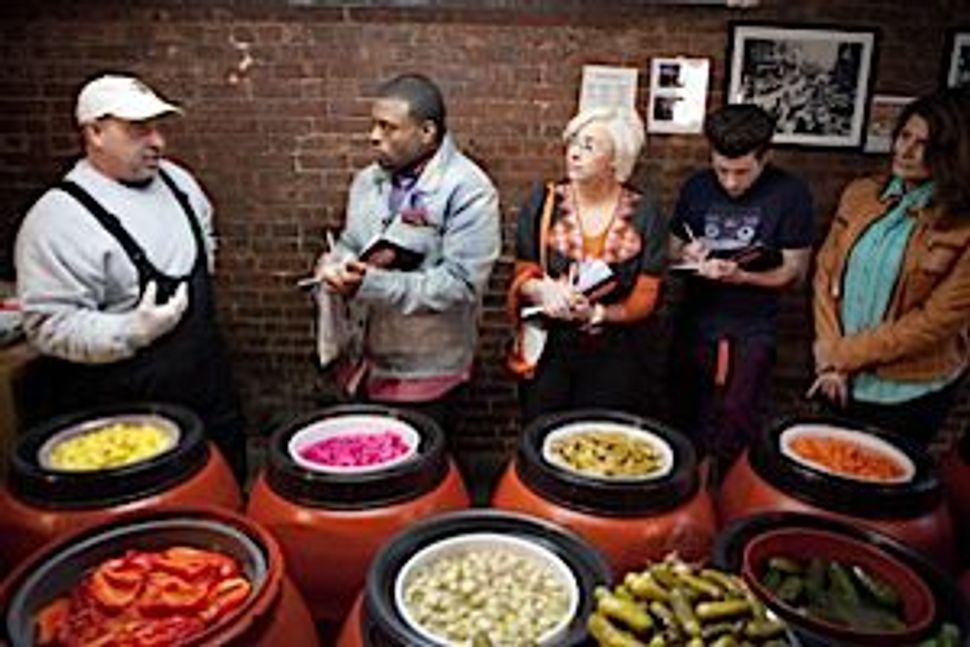 What would a gastronomical visit to New York be without a stop on the Lower East Side for some traditional Eastern European Jewish food? That’s exactly what the producers of The Next Food Network Star were thinking when they sent one group of contestants to the area on this weekend’s episode.

The episode was all about ethnic food in New York, with Alton Brown’s group checking out the Jewish food, Giada De Laurentis’s crew headed to Little Italy, and Bobby Flay’s team checked out Harlem. The assignment was to visit several landmark culinary businesses in the neighborhood, and then to make a dish inspired by them.

On the Lower East Side, Brown’s group visited legendary competitor of Essex Street Pickles, The Pickle Guys. Unfortunately, contestant Judson said, “I’m just not feeling it,” as he heard a shpiel from an apron-wearing pickle monger in front of the barrels brimming with full sours, half sours, and an assortment of other pickles. However, stops at the Streit’s Matzah factory and Kossar’s Bialys proved very inspiring for contestants Justin and Emily, who come up with Bialy-inspired chips and a Passover meatloaf, respectively.

Few people can forget a pastrami sandwich they ate at Katz’s Deli. So, it is not surprising that contestant Martie made a dish inspired by the deli masterpiece, which she first encountered 20 years ago on a trip to New York. Martie, quite a schmoozer, likes to talk a lot, so it’s no surprise she felt at home at Katz’s.

Unfortunately, the Jewish food team didn’t win this round. The honor went to Giada’s Little Italy team. But all is not for naught. Bialy chip, anyone?