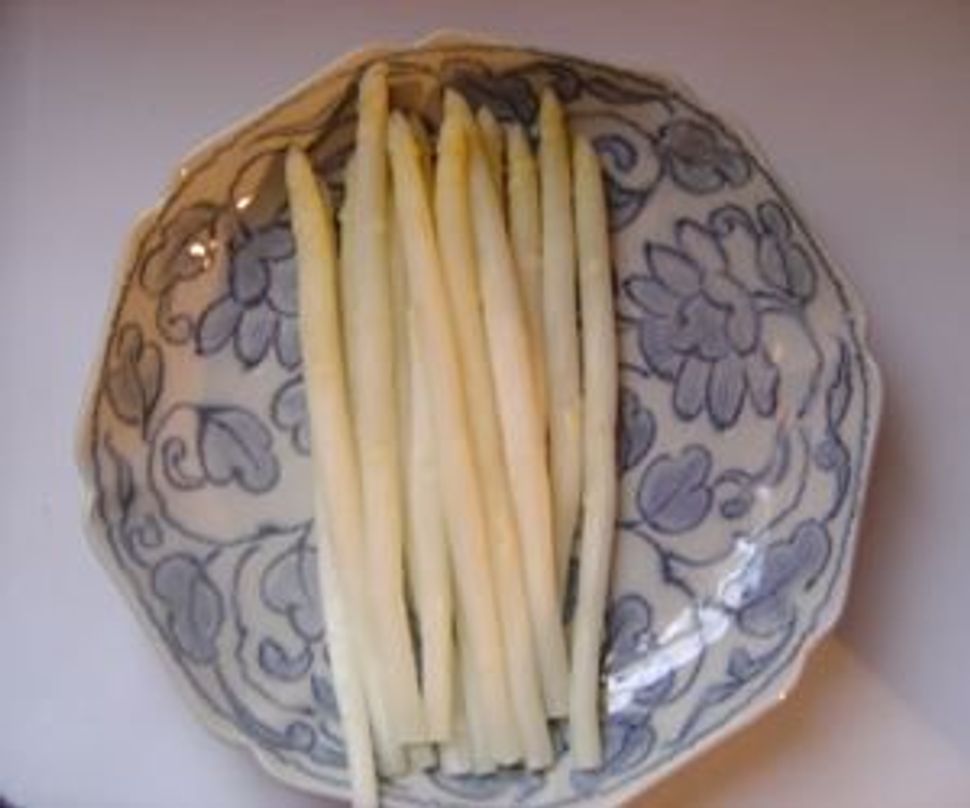 I love asparagus. They are sweet and tender and, more than any other fruit or vegetable, asparagus mean spring to me. They are the heralds of warm weather; signifiers of the oncoming berry season, shorts weather, and long, lazy days in the kitchen. I’ve always been impressed by asparagus. They are determined. It takes three years for their root systems to even develop enough to be harvested. Once the roots are finally established, the stems push their green heads through the cold ground, fighting to be the first vegetables each spring. Asparagus are strong, too. They can grow up to seven inches a day, and need to be cut every morning.

That evening in Bilbao, Spain, however, I was not in love. I hated the asparagus in front of me. They were white (not green, as I was used to), and instead of being cooked, they had come from (gasp!) a tin where they were packed in salt water. These white asparaguses are considered a delicacy, but I was not and am not a fan. To me, they tasted like metal and were slimy and stringy.

Now, I understand that the white asparagus is a labor of love. In order to grow, they must be continually covered with dirt to keep the stem from being exposed to the light. But, they just weren’t for me. However, as a vegetarian in Spain, nearly everyone I encountered seemed to think I must love them, or at least want to eat them, because I was served them with nearly every meal; they came with salads, sandwiches, on their on as pintxos or tapas (small-bite appetizers). I just could not stomach them. I would leave them politely on the side of my plate, the neat line of white a testament to my disgust.

Back home in the states, however, it is a different story. I eat green asparagus by the bunch. Starting from late April through mid-late June, it is available at my local farmer’s market. As I’ve written before on this blog, I am not from New York. Back home, in Ann Arbor, we have one big farmer’s market, and when those first bunches of asparagus come in, I think the entire city goes into a frenzy. I hear about friends roasting it, grilling it, pureeing it into soups, dips, even incorporating it into cakes. I like a simple sauté (or grill) with olive oil, salt, and lemon.

I feel a little guilty for my dislike of the Spanish asparagus. Maybe it’s just that it doesn’t seem fair that something that should taste so good has been put in a tin, and I feel sorry for it. Maybe it’s that I am ashamed that I don’t like something that is considered a “delicacy.” Maybe I was, and still am, somewhat afraid that I will insult a country I love so much by saying I dislike one if it’s most beloved dishes. Whatever it is, I have to be honest; the white asparagus is not for me. ¡Lo siento, España! (I’m sorry, Spain)

Here is a recipe for sautéed asparagus the way I love it. Quick, easy, and perfect next to just about anything: 1 bunch asparagus
1 tablespoon olive oil (I prefer Spanish)
1 lemon
Sea salt and pepper to taste

1) Rinse asparagus in cold water, “snap” them to get correct length. Asparagus have a natural break point – just bend until they break and compost or discard the non-pointy end.

2) Pre-heat a medium-large stainless steel or cast iron pan over medium-high heat. Add in ½ the olive oil. You’ll know the pan is ready when the oil pops a bit when you sprinkle a little water on it.

3) Put in half of the asparagus. You don’t want to overcrowd your pan!

4)Add a dash of salt and pepper (I add all of the pepper and only some of the salt).

5) Move the asparagus around occasionally, making sure they don’t burn (a little browning is OK though). They are done when they are bright green.

6) Put on a plate, squeeze half a lemon (or a whole lemon if you’re like me) over the asparagus. Add salt to taste. Serve hot.