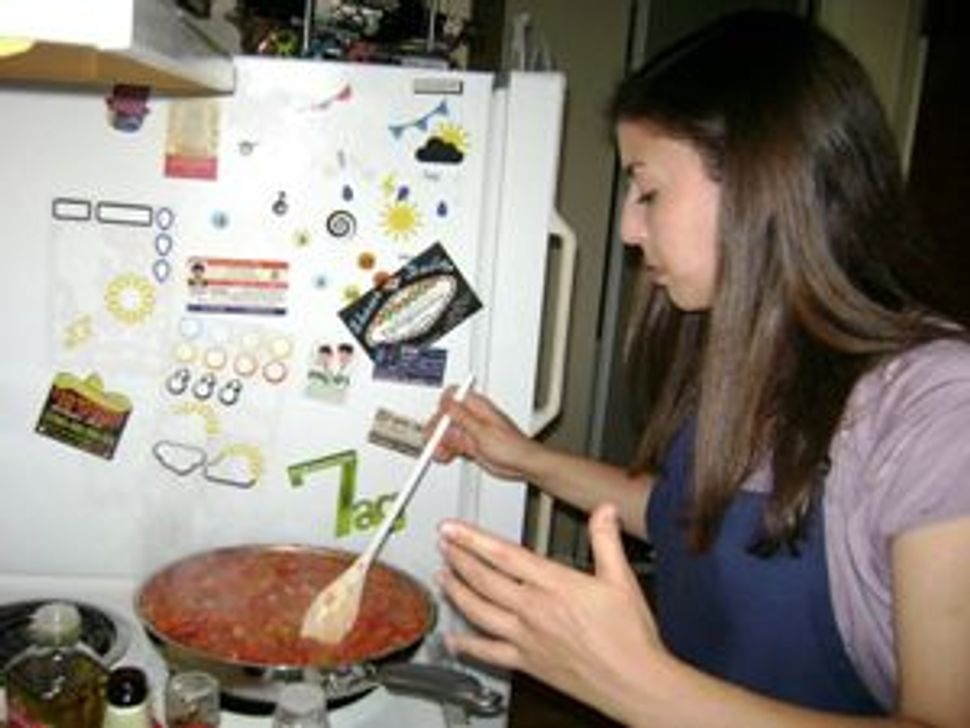 If you closed your eyes, you could easily imagine the scent of rich tomato and onion wafting from Jennah Craig’s East Bay apartment, and the joyful colliding of conversations ricocheting down the hallway coming from an airy apartment complex in downtown bustling Tel Aviv. That was exactly the feeling this gathering was going for. A group of ten young adults who’ve all settled in the Bay after years living in Israel, we rolled up our sleeves to create a Middle Eastern-style feast of Shakshuka (see recipe below) and homemade pita, and toasted to some of our most memorable meals cooked in the Holy Land.

Danna Rubin, Northwest Regional Director for Masa Israel Journey, spearheaded the edible effort after hearing from a number of MASA Israel program alums that the thing they missed most from their time spent in Israel was spent making a mess on the stove, in good, raucous, company. “A big part of living in Israel is gathering together and cooking meals together; something less prevalent in American culture,” says Rubin.

As the Shakshuka (a deliciously simple dish of eggs poached in a sauce of tomatoes, chili peppers, onions and as many additional ingredients as you can dream up), bubbled and simmered on the stove (after we’d finally agreed to stop futzing with the recipe), some in the group opened up about their favorite Israeli feasts.

Danny Fleischer, who recently returned from several years spent living in Israel, and serving in the IDF, had tuna, of all things, on the brain. “While most people wouldn’t associate it with Israel” he says, “There is nothing that brings me back to Ha’aretz like an old can of oil based tuna…As a soldier, my team was often stuck eating canned tuna three meals a day — for weeks on end. As time went on, we began to get creative with our rations of tuna, finding unique and often questionable ways of garnishing and preparing it. One of my favorites was “burnt tuna” with Tabasco sauce. It goes best with after an all night march through the Negev and eaten under the light of a vibrant sunrise and a dirty canteen that tastes like sand.” (He offered a recipe almost too gross to include here but for the curious and brave, here it is:

After carefully opening up the can (being cautious not to spill any of the oil), lay a few plies of toilet paper directly on the now-exposed tuna in the can letting the toilet paper soak up the oil. Next, light the now wet toilet paper and let the flames slowly cook the tuna for 7-15 minutes, depending on how “well done” you like your old tuna. Finally, after the tuna has reached your desired temperature, extinguish the flames and wait for the can to cool for a minute or two. In the meantime, extract your baby Tabasco sauce bottle that you have hidden in your vest and begin adding and mixing until you have reached your desired level of spiciness. Eat and Enjoy!

Jennah Craig, who now serves as the Assistant Director of the American Jewish Committe in San Francisco, shared a Pesach story from her days as a student on a shoe-string budget, living in Be’er Sheva:

“During Passover 2011” recalls Craig, my friend Jeff went to a moshav, for the chag (holiday). “We decided to cook dinner together — like we did quite often. On a walk on the moshav Jeff spotted two trees, an avocado and a lemon tree in the front yard of one of the houses. Jeff asked if he could take from the trees that were overripe with springtime fruit and of course the family agreed.” As it turns out It turned out Jeff had taken the fruit from the house of Moshe Dayan, an Israeli war hero legendary for his service to the state. When Ceng (another friend) and I arrived at Jeff’s to cook — Ceng had ingredients for dinner and I had a full bottle of arak (an Israeli liquor made of anis) — both our eyes lit up at the site of the lemons. We cooked a meager meal as we did often in Be’er Sheva, Ceng taught Jeff and I how to cook some of the best sauces, soups, marinades for meat, salads (onion salad being my favorite). I don’t remember what exactly we ate on that particular night I only remember that we squeezed every single drop from those lemons and that bottle of Arak making l’chaims, and toasting to Moshe Dayan and the greatest Israeli heroes of all time.

“I miss those dinners a hell of a lot,” said Craig. “I miss cooking with those guys, and drinking good arak and wine until the early hours of a Shabbat morning. There is no finer life than cooking a meal in close quarters with friends like those!”

The memories and hilarity from the group in Jennah’s kitchen continued to flow until the last of the nargilah coals had burned and we’d all sustained Shakshuka-induced comas. I left feeling that, for all the edible spoils the Bay has to offer, nothing quite compares to the taste of a meal I had to elbow and haggle my way through a crowded Jerusalem shuk to shop for, a bottle of 10 shekel kosher wine and friends who make you laugh until hummus comes out your nose.

To taste: Salt, pepper, chili pepper flakes, lots of paprika, the smallest hint of basil or oregano if you’re feeling brave, you can also chop up a bell pepper or two for texture

1) Select a large pan, cover the bottom with oil and heat on high.

4) After it thickens, crack eggs on top, and cover pot. When the eggs are cooked, the Shakshuka is ready.

Note: The best part about Shakshuka is you can add whatever you want to the tomato and onion mixture and it will taste delicious, because it was made with your own hands.

*Want to learn more? Make shakshuka in Brooklyn on June 24 or try the real thing in Israel this fall on the Arava Institute Hazon Israel Ride.