Cheese, A New Culture of Kosher 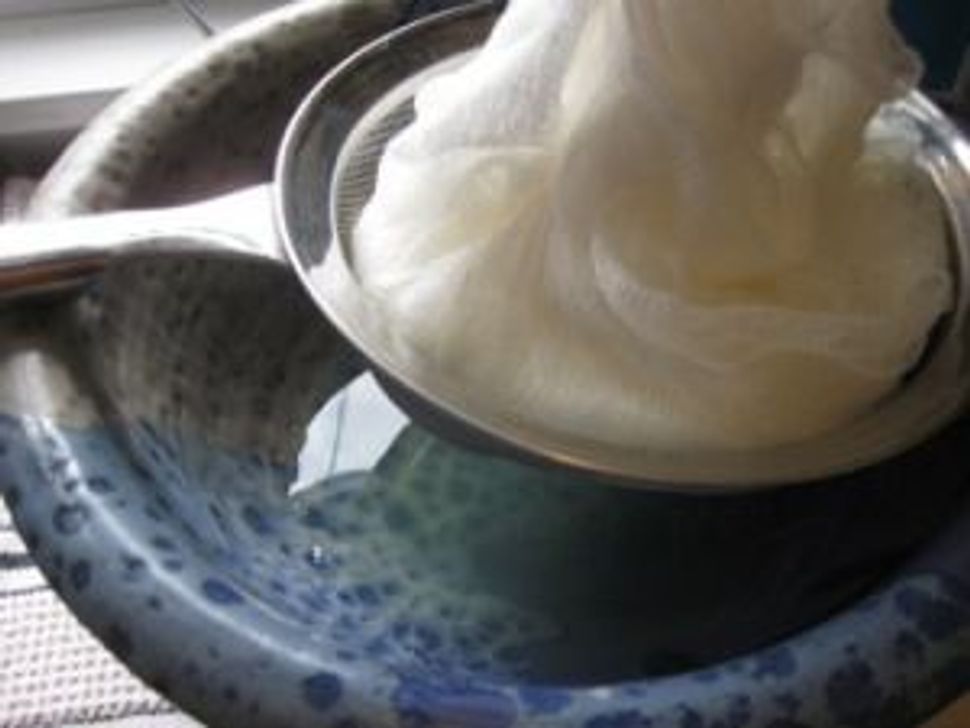 Kosher cheeses from around the world can be impossible to find. Just try to locate a hekhshered English Lancashire, Greek Halloumi, Spanish Cabrales, or triple crème from France and you will be utterly disappointed. For American home cooks, or even professional chefs, this can put a halt to some recipes that delve into the cultures of faraway places that could intrigue and delight one’s family, friends, or clientele. Cheese is an integral part of many country’s cuisines and something that had been made at home for centuries. While some varieties require a few specialty ingredients and long tedious processes, others can be produced very simply in under a few hours without much supervision — a superb way for the home chef to add a bit authenticity to a regional recipe while still sticking within kosher confines.

Indian cuisine can be prepared best as a dairy meal, the main reason for this being the consistent use of ghee (clarified butter). This key ingredient is easily made at home by slowly heating a desired amount of butter in a saucepan and ladling off the milk solids that rise to the top. You are then left with a translucent yellowish cooking oil that is great for anything from simmering to sautéing at high heats. Without the milk solids, the clarified butter has a higher smoke point, but still maintains a rich flavor. Ghee is used in many traditional recipes and adds richness to vegetarian dishes such as dahl makhani, lentils cooked in a garlicky, buttery sauce, and chana masala, chickpeas simmered in a spicy tomato & onion base. Another ingredient that will generously diversify your Indian recipe repertoire is paneer, a traditional Indian cheese that can be made at home with only two ingredients. Paneer, with its versatile mild flavor, can be used in many ways — appetizers, main course, and desserts

Making paneer at home is easy and all you will need is a half-gallon of whole milk (preferable raw or non-homogenized), ¼ cup of lemon juice (fresh squeezed is best) and a large piece of muslin cheesecloth which you can buy at most supermarkets. Heat the whole milk in a heavy bottomed saucepan over medium heat, gently stirring occasionally. Mix the lemon juice with ¼ cup warm water and add gradually to the milk as it reaches a rolling boil. As you stir in the lemon juice, the curds will separate from the whey and you can turn off the heat at this point. Slowly strain the mixture through a sieve lined with muslin cheesecloth over the sink. Rinse your curds with cool water and then wrap tightly in the cloth and squeeze out excess liquids. Then place the wrapped curds underneath a heavy pan to press out more whey for one to two hours. If you would like to use the cheese for a main dish, you can opt to knead the curds a bit before pressing them which will help the curds to knit together more for a tofu-like texture and result.

I have used this homemade cheese to make traditional Indian dishes such as palak paneer and paneer kofta, the latter being a great vegetarian substitute for meatballs in a mild curry sauce. I also think this mild cheese can forge it’s way into some considerably more traditional “Jewish” recipes as well — try it grilled or griddled with cabbage in a sweet and sour tomato sauce, sliced thin, breaded, and fried for a vegetarian schnitzel, or in place of cottage cheese in your favorite savory or sweet dairy recipes.

Meanwhile, in the western hemisphere, a very similar cheese is being made in households all over the Americas. Queso Fresco, originally from Mexico, is a fresh, mild, and versatile cheese can add protein to salads or cut the spice of a chile spiked salsa. The ingredients are almost identical to paneer, except you can use lime juice or vinegar instead of lemon juice. Starting the cheese making process for queso fresco is the same — heat a half gallon of whole milk slowly in a heavy bottomed saucepan until almost boiling (but not boiling!) and add the acidic counterpart, either ¼ cup lime juice or 1/8 cup white vinegar, and watch the curds separate. Continue to let it simmer for a few minutes, and then strain through muslin cheesecloth. Sprinkle the cheese with a pinch or two of salt, or any other seasonings you’d like — perhaps chile powder, pepper, cumin, or fresh cilantro. Tie the ends of the cloth together and let it hang for at least four hours and as long as overnight, if you can wait that long to devour it.

Yes, kosher cheese can be elusive but if you try making these simple regional versions of “cottage” or “farmers” cheese you might be surprised at how easy it is to keep it kosher and still explore cuisine from around the globe.

Emil Boch is the Head Chef at University of Michigan Hillel, where he runs a kosher kitchen and serves creative and seasonal food to students & the greater Ann Arbor community. He also has a private chef & catering business, From the Hearth Food, which serves the needs of kosher, vegan, and vegetarian events. He lives in Ypsilanti, MI, with his wife, Monica, and two dogs.

Cheese, A New Culture of Kosher