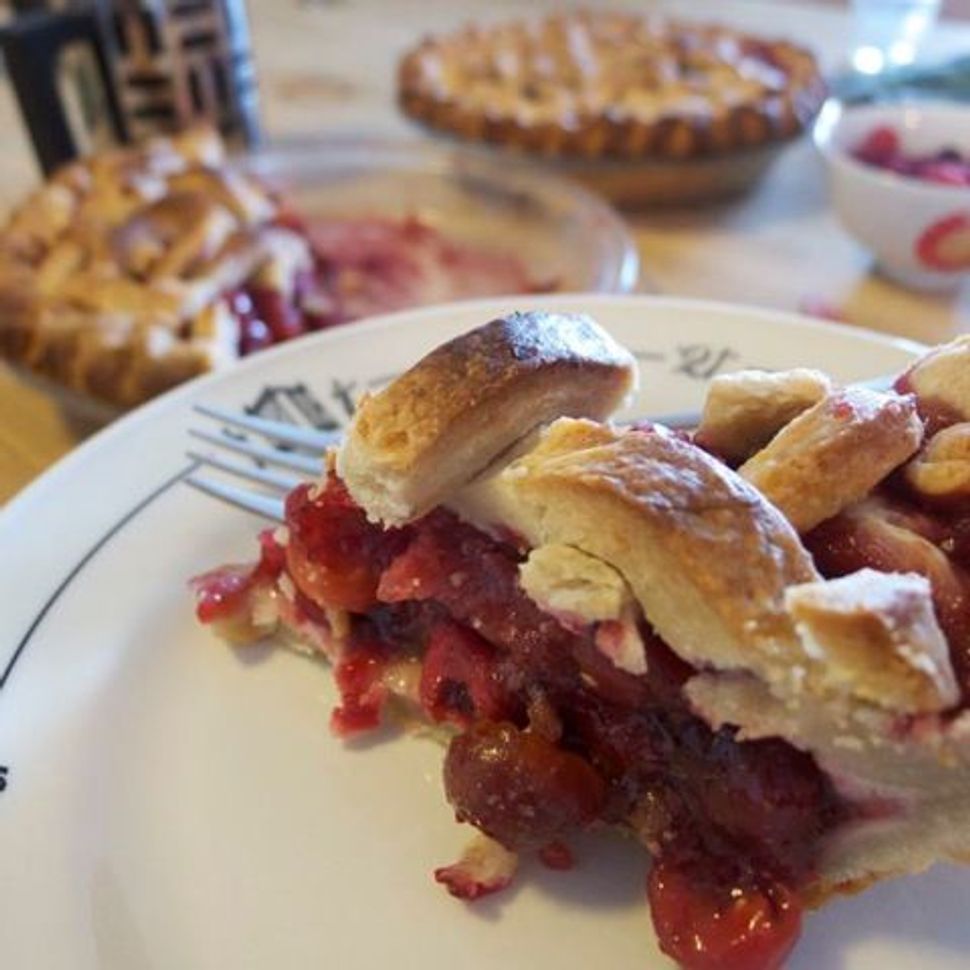 Once upon a time in the 90’s, I pitted my first quart of sour cherries looking out on the woods. We were a shaggy group of New York artsy types: half in Birkenstocks, the others in boots. There on the back porch of a summer cottage named Ravina, I wondered about how those bright red cherries had traveled from an orchard in the Catskills to the Union Square Greenmarket in New York City then back up to the Catskills to this cabin to be among trees again.

I used a wine bottle for a rolling pin. My efforts to remove the pits with my Swiss army knife resulted in a bowl of muddled fruit and stained fingers. The antique oven only had two settings: “off” and “burn.” My friends used words like “rustic” and “charming” to describe that first pie, but truly it was a mess. One of us had left some wet paintings out near the bug zapper and that was cause for greater visual admiration than that first pie out of the oven. But when I scooped the warm chunks of pie onto our plates after dinner, the combination of the sweet juices, bitter-tart cherries, and the tender, buttery crust ceased all the banter and apologies. I saw my life in that bowl of mangled cherries.

Each July since, I’ve made cherry pies during New York’s fleeting sour cherry season (roughly the two middle weeks of July). They are invariably the hottest two weeks of the year. Eventually, I began emailing pictures of these pies to the friends who ate them. Somehow the Pie List came into being. Over the years, “Cherry Pie” evolved into an annual art project: part pie porn, part mail art, part endurance performance. Once the season commences, I try to bake at least one sour cherry pie a day until I can’t find any more cherries. Throughout the process, I report on each pie’s adventures (the parties, the quiet corners, the old friends and new friends). I’ve come to see it as my elegy to the American Dream: the pursuit of happiness.

I’m not sure how many cherry pies I’ve made. Some summers are easier than others. This year has been all about plagues of biblical proportions: freakish weather conditions that caused historic decimation of our nation’s tart cherries; the early and expensive crop in June instead of July; the inevitable heat wave that coincided with pie season; the trauma of the dropped pie; and the usual rush hour perils for a basket full of warm pie on the subway.

Over the years my craft has improved. When one eats the same pie for 20 days in a row each summer, ones taste becomes more discerning. I’ve accrued a small armory of cherry pitters and pastry tools. I’ve learned to identify different varieties of sour cherries. I’ve read treatises on thickeners for fruit pies. I follow bulletins from the Cornell Cooperative Extension. I make friends with fruit farmers. I know where to buy the freshest butter at the best price.

My approach has become stridently about presenting the fruit as purely as possible. What I want is intact sour cherries coated in a lightly sweet sauciness. Anyone can buy a frozen piecrust, open a can of cherry pie filling and put the thing in the oven. But, you won’t get a real cherry pie.

And don’t think you can use regular “eating cherries” for pie either. They have their charms but only raw. Heat flattens their flavor. They get mushy and cloyingly sweet. Take it from me. It’s wisdom from the pain.

So what is the perfect cherry pie? It consists of about two pounds of fruit (200-250 cherries depending on the size of the fruit), less than a cup of sugar, a spoon or two of Minute Tapioca straight from the box to thicken the juices slightly, a dash of cinnamon, a whisper of clove, and a splash of good bourbon. You must pit the cherries. But do not combine anything until your glass pie plate is lined with crust. Then mix the filling together quickly and pour it in the plate and cover with lattice top.

What about the crust? I use this one with half a cup of ground, blanched almonds added to the flour.

Put the pie in a hot oven for about an hour. You’ll know it’s done when the crust is brown and the juices are bubbling. Let it rest for about 20 minutes before attempting to transport or slice it.

That’s as close to a recipe as I’ll share. The rest is up to you.

The past few years of these pie journals are collected on my blog: Nothing Happened Today.

Elaine Tin Nyo has worked at the Forward since 1998 as a freelance graphic production artist. In addition to her freelance graphic design practice, she has worked in curatorial, administrative and technical roles at various arts institutions, most recently as the founding director of the multi-disciplinary art space, EFA Gallery in New York, NY. She is a conceptual artist who produces text, visual objects, performative experiences and immersive environments. Her artwork has been produced and present globally. In the name of art, she danced with strangers at a Harley-Davidson dealership; stood knee-high in fermenting skate in Korea; raised 10,000 worms to make soil in her apartment; and lived in a tipi on a frozen lake…and lived to tell about it. She can be reached at [email protected]